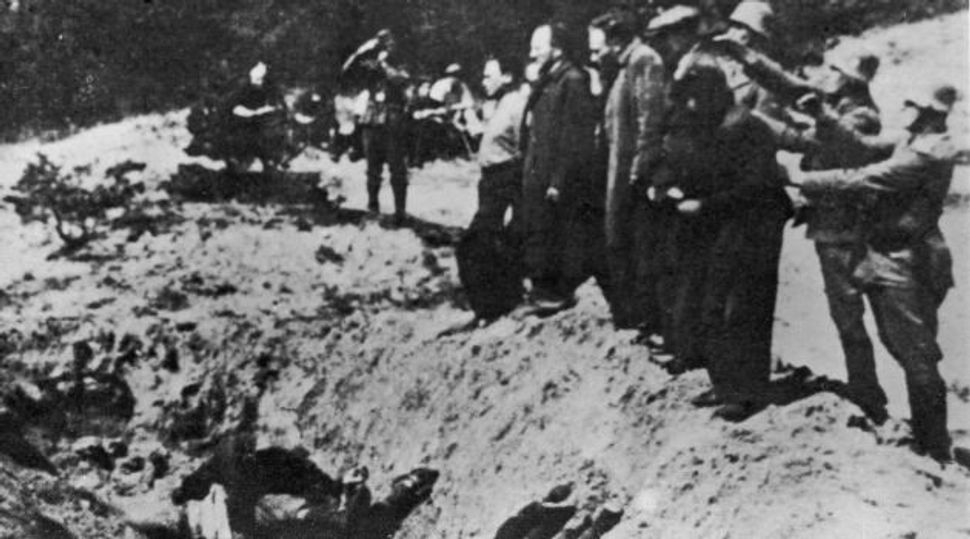 While studying Yiddish in Lithuania during the summer of 2008 my fellow students and I visited Ponar, the site where 100,000 people, including nearly an entire branch of my family, were murdered in mass shootings.

Visiting the scene of such an incomprehensible crime committed on an industrial scale I became aware of the physical details of how the killings were carried out. After reading (and translating) accounts from survivors I found that I still could not visualize what had occurred so I sought out videos of similar massacres committed by Einsatzgruppen, mobile SS killing units. During the following fall I saw nearly every such film that is available, as well as films of war-time atrocities in El Salvador. At the time I was considering studying forensics in order to work with criminal investigations of war-crimes. I soon realized, however, that I wasn’t psychologically cut out for such work.

My experience with viewing films of shootings did, however, leave me with a well-trained, albeit non-expert eye that I use to critically evaluate films of disputed incidents. One thing I’ve learned watching films of such material is that the human body reacts to the trauma of a gunshot wound in a wide variety of ways. The Hollywood stereotype of a person being shot and keeling over like a felled tree is just that, a stereotype. It does happen. But people also sometimes run and suddenly collapse after being shot. People sometimes twitch involuntarily after being shot. And in a few instances I’ve even seen a person be shot, fall, catch himself with some apparent coordination and then lie still shortly thereafter.

Since the filmed deaths of Palestinian teenagers Nadim Nawarah and Muhammad Salameh, on May 15 during a demonstration in the West Bank town of Bitunya were released to the public many people have commented on social media that the films must have been faked because such a display of coordination is not possible. Among them is Rabbi Kenneth L. Cohen, the founder and director of the Vine and Fig Tree Project, a religious pro-peace organization.

In a series of Tweets sent on May 21, which are no longer publicly viewable, Cohen responded to tweets about the footage by claiming that a person catching himself in such a way was “inconsistent” with his having been shot and that the films were therefore staged. Cohen used the term “Pallywood,” a term combining Palestine and Hollywood, as a hashtag to refer to his belief that the films were staged.

Before I go any further I would like to look more closely at the films in question. The Israeli army has stated that they are either staged or edited in a dishonest way and having no relevant experience with film-doctoring I cannot evaluate such claims. Either way I can, with absolute certainty, say that the way that Nadim Nawarah reacted on film to being shot was in no way “inconsistent” with his being shot. In fact, looking at the film it strongly appears that he did not catch himself as Cohen alleges. In the first two films, shot from behind, Nawarah can be seen to fall forward, his arms blocking his fall.

Although at first glance it may appear to be a voluntary coordinated motion, another video of him being shot filmed from a different angle strongly gives the impression that although his arms blocked his fall there was no coordination behind their movement. Even so, had Nawarah caught himself as Cohen alleges this would in no way in and of itself deny the veracity of the footage. I’ve seen films with people doing just that after being shot.

Cohen’s claim that the footage was part of a “Pallywood” conspiracy due to Nawarah’s having caught himself is profoundly disturbing to me, not in the ignorance it evinces about how people should appear after being shot but in its continuation of the idea that Palestinians are inherently liars. Unlike Cohen, I am not an expert in peacemaking. But I do know that peace is built on trust, goodwill and mutual respect. And there is nothing more disrespectful and indeed dehumanizing than stating without evidence that a child didn’t die correctly.

What message does it send to Nawarah’s mother shortly after burying her son, to hear that a prominent rabbi in America said that the way her son fell after being mortally wounded wasn’t “consistent” with how he should have fallen? Does such a statement encourage peace?

I do not know what happened in this case. I was not there and have only seen the same films that are publicly available that many of you have seen. Although footage taken by CNN released yesterday clearly shows that an Israeli soldier fired the shot that killed Nawarah, I would reserve judgment as to why two young men lost their lives. I have no information with which to judge the soldiers’ actions.

But neither Cohen nor the thousands of other “Pallywood-ers” have any information with which to judge the way that Nawarah died, either. I wish that they too would reserve judgment and acknowledge the Palestinian witnesses common humanity enough to consider the idea that they might just be telling the truth. Sadly it appears to me that these people are more concerned about controlling the narrative than getting to the truth.