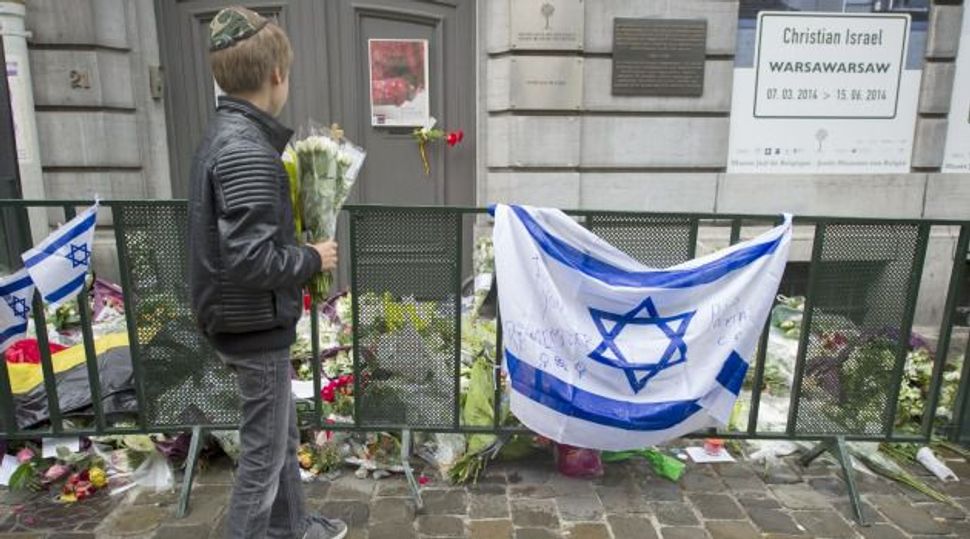 ‘At what point,” columnist Jeffrey Goldberg tweeted recently “do the Jews of America and the Jews of Israel tell the Jews of Europe that it might be time to get out?”

While Goldberg did not elucidate the reasons for his stark view of the future of European Jewry, it is likely that he had in mind the shooting of four people at the Jewish Museum in Brussels on May 24 and the success of several far-right parties in the following day’s European Election results.

Goldberg is not the only one to have had this thought. In fact, according to a 2013 opinion poll by the European Union Agency for Fundamental Rights, more than a quarter of Jews in the E.U. have considered emigrating at some point in the past five years, because in their own countries they do not feel safe as Jews. This figure rose to more than 40% for Belgian, French and Hungarian Jews.

It is too soon to speculate about who might be responsible for the Brussels shooting. Whoever is behind it, though, it is not too early to appreciate the impact it could have on the sense of safety and belonging of Belgian Jews, 45% of whom (according to the FRA poll) frequently or always avoid wearing in public their yarmulkes, or Star of David necklaces, or other identifying markers that they would otherwise wear, lest they be identified as a Jew and attacked.

Yet just this April, after an alleged neo-Nazi shot and killed three people at Jewish community buildings in Kansas, there were no concerned tweets about the future of American Jewry; nor did American Jewish leaders voice their concern about the unsustainability of “normative Jewish life,” as European Jewish Congress head Moshe Kantor did about European Jewry even prior to the Brussels shooting.

Many observers will explain this inconsistency by pointing to the political atmosphere in Europe. A continent where traditional Jewish practices such as shechita, ritual slaughter, and circumcision are under increasing scrutiny will now have neo-Nazis sitting in its parliament for the first time in its 56-year history. Three of them will be Greek; one, in a development full of historical foreboding, will be German. Most worrying of all, in France the Front National followed up its recent successes in local elections by winning a plurality in the European Elections for the first time, coming first with 25% of the vote. A realistic run at the presidency in 2017 for F.N. leader Marine Le Pen cannot be discounted.

As British political commentator Paul Mason put it: “The Euro project was supposed to make sure the continent could never again go fascist. If European legislatures are now crawling with fascists, what was the point of that?”

Yet the portrayal of these elections as a sweeping success for the European far right can be slightly misleading. There is certainly reason to worry, but the problem is much more nuanced than how it is often presented.

Most E.U. countries do not have a far-right party to speak of, and the far right members elected will still form a small and fragmented minority in the European Parliament. In several countries, the far right polled surprisingly poorly. This is especially the case for those countries hit hardest by Europe’s economic problems of recent years. Spain, Portugal, Italy, Ireland and Cyprus all disprove the theory that economic disaster leads inevitably to fascist success. Only Greece has followed this particular historical precedent.

Those far-right parties that fared well did so for the same underlying reasons that the anti-austerity Syriza topped the poll in Greece, Beppe Grillo’s Five Star Movement came second in Italy and the anti-E.U., anti-immigration (but not far-right) United Kingdom Independence Party gave its leader, Nigel Farage, his promised “earthquake” by winning in the U.K.

These reasons include a loss of confidence in the institutions of the E.U., anger at the lack of accountability of those making crucial economic decisions in Brussels and a sense of unfairness at the economic consequences of Europe’s crash.

There are country-specific reasons that voters’ search for a new political home has benefited different parts of the political spectrum. Beyond Hungary and Greece, far-right success came mainly in the countries of Western and Northern Europe where people feel that they were not to blame for the Eurozone’s economic problems but are having to pay for them nonetheless.

These West European far-right parties do not want to bring down democracy, but they do want to cut immigration (or stop it altogether) and roll back the cultural and religious diversity that has become part of the E.U.’s guiding philosophy. These policies are not driven primarily by anti-Jewish sentiment, but they can encourage a less tolerant attitude toward difference in general, fueled by a xenophobia that seeks scapegoats at times of political and economic insecurity. And Europe’s Jews do not need our American friends to remind us where that can lead.

Dave Rich is the deputy director of the Community Security Trust, a United Kingdom charity that provides security advice and assistance to the U.K. Jewish community.