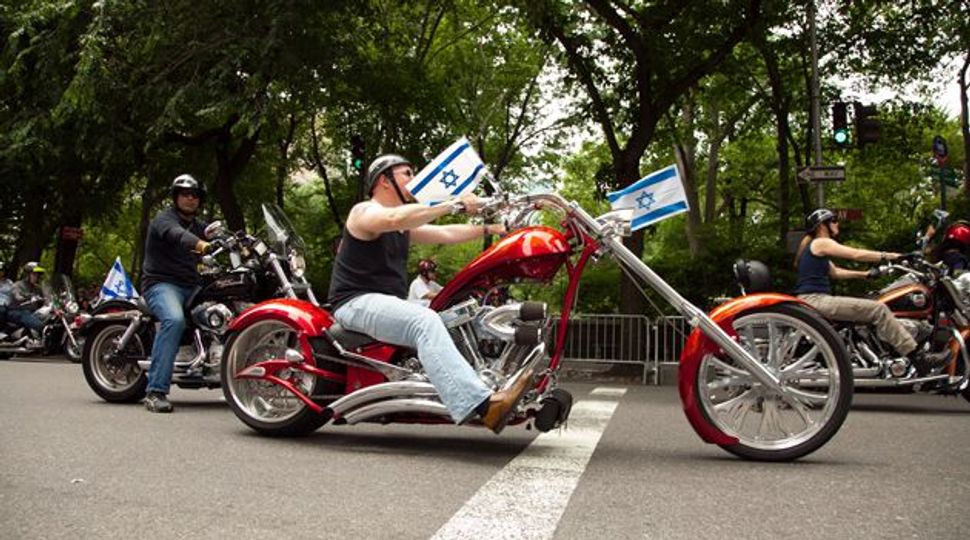 Shrinking the Tent: The Israel Day Parade has had a powerful impact over the years because of its diversity and wide appeal. Now, a group of right-wing ideologues want to bar perceived dissenters, like progressive Zionists. Image by getty images

Here’s a brain-teaser: If Mordechai Anielewicz, commander of the Warsaw Ghetto Uprising, had survived the war and ended up in New York, could he march in the Israel Day Parade?

Answer: Not if certain self-appointed guardians of Zionist purity had a say. Anielewicz led the Warsaw chapter of Hashomer Hatzair, the socialist-Zionist youth movement that spearheaded the ghetto’s Jewish Fighters Organization. Had he landed in America, he surely would have plunged back into his movement, as other ghetto fighters did, and gone on to lead its parent organization, known today as Partners for Progressive Israel.

Partners for Progressive Israel, it so happens, is one of three organizations our watchdogs tried to ban from the June 1 parade. The other two are the New Israel Fund, which finances various social justice causes in Israel, and B’Tselem, Israel’s main human-rights monitor. B’Tselem wasn’t actually planning on marching in the parade this year, but these watchdogs aren’t very good with facts.

In a way it’s the latest chapter in an ongoing fight to purge the Jewish community of dissenters and undesirables. For several years Orthodox groups fought to prevent gay Jewish groups from the parade. Now it’s conservatives against liberals.

The rap against the three suspect organizations is that they support BDS, the international campaign to isolate Israel through boycotts, divestment and sanctions. It’s not true, but as I said, go argue.

For starters, consider Partners for Progressive Israel. Originally known as Americans for Progressive Israel, it was formed after World War II as the American affiliate of the Hashomer Hatzair Workers Party in pre-state Israel. Hashomer Hatzair itself began in Austro-Hungary in 1916, established its first kibbutz at Beit Alfa in 1922 and helped create the Palmach, the elite strike force of the Haganah, in 1941. After independence it joined with another labor faction to form Mapam, which became Israel’s second-largest party.

The American branch was never large, but it’s played an outsize role in the broader Zionist movement. Among other things, it helped launch New York’s Israel Day parade in 1964. In 1997 it took the name Meretz USA, following its Israeli arm. In 2011 it changed again, since nobody here knew what Meretz was. Now it’s Partners. Basically, though, it’s still Hashomer Hatzair.

In short, this movement is one of Israel’s founding institutions. So how did it become Public Enemy No. 1?

There are two ways to answer that. One is to describe the sequence of events. The other is to step back and look at the larger picture.

Let’s start with the events. In 2010 the West Bank mega-settlement of Ariel dedicated a new auditorium and announced a lineup of performances by Israel’s major theater companies. About 60 actors and artists declared they wouldn’t perform there.

The right erupted. Prime Minister Benjamin Netanyahu said the actors were aiding Israel’s enemies by promoting boycotts. The country was already in an uproar over a handful of lefty professors who endorsed European BDS. Settlers and their allies claimed Israeli shoppers shunning settler-made cosmetics were the same as European banks quarantining Israel’s economy. In 2011 the Knesset outlawed all advocacy of economic boycotts of Israel “or areas under its control.”

Overseas, a few Jewish entertainers spoke out for their Israeli colleagues. Notable was actor-folksinger Theodore Bikel, who chairs the board of Partners for Progressive Israel. With board backing, a call was posted on the website urging supporters not to buy merchandise from settlements.

Ostensibly, that put the venerable Zionist organization on a collision course with Israel. But that’s unclear. The anti-boycott law was under challenge in Israel’s Supreme Court as an unconstitutional infringement of free speech. The government’s own attorneys were reluctant to defend it. The court froze the law. In oral arguments last February the justices appeared to be leaning toward overturning the ban on settlement boycotts but upholding the ban on advocating anti-Israel BDS.

But that hasn’t stopped the right from insisting they’re the same thing — and accusing anti-settlement activists of aiding the enemy.

One of the smoothest left-bashing operations is NGO Monitor, a non-profit that hunts for non-profits aiding the enemy. One of its chief targets is the New Israel Fund, which raises about $25 million per year for Israeli liberal causes ranging from religious pluralism to battered women and Ethiopian equality. About 20% goes to groups NGO Monitor considers sketchy, mainly civil liberties and Israeli Arab rights.

Way further right is Im Tirtzu (“If you will it…”), a self-styled crusader to restore Israeli Zionism. It’s best known for its glossy 2010 report accusing NIF of assisting the notorious Goldstone Report, which charged Israel with war crimes. It seems Goldstone relied heavily on publications by NIF grantees, especially B’Tselem. That makes them collaborators.

The Israeli military also relies on B’Tselem, which helps draft ethical guidelines, but why ruin a good story?

Last year Im Tirtzu sued a website that called it “fascist,” but lost when the judge said it was a fair characterization.

NGO Monitor and Im Tirtzu seem to be the main inspirations for JCC Watch, the New York organization that wanted NIF, B’Tselem and Partners booted from the parade. It began in 2011 when Richard Allen, a financial adviser, saw the three listed as cosponsors of an Israel film festival at the Jewish Community Center of Manhattan. Since then he’s organized a series of ads and rallies, sometimes drawing up to dozens of people, to have the JCC defunded by New York’s United Jewish Appeal-Federation of Jewish Philanthropies. UJA-Federation also funds the Israel parade. Failing to get action on either front, he’s escalated to attacks on UJA-Federation itself.

I asked him once if he was familiar with the background of Partners for Progressive Israel and Hashomer Hatzair’s role in building Israel. He gave me a blank stare and indicated that he wasn’t. He hasn’t learned since. Who has time for the history of Zionism when you’re busy defending Zionism?

Allen wouldn’t amount to much more than a semi-comical annoyance if there weren’t dozens of such bullies around the country trying to censor discourse in the Jewish community — protesting film festivals in San Francisco and plays in Washington, canceling lectures at Hillel houses and Jewish high schools, all in the name of defending Israel and Jewish rights.

Some may recall a similar wave of paranoia in the late 1970s and early ’80s, when AIPAC and the Anti-Defamation League were accused of circulating enemies’ lists and liberal Zionist groups were getting forced off campuses and out of the community. Maybe it coincides with the emergence of particularly suspicious-minded Israeli prime ministers, or increases in Arab hostility, or U.S. efforts to force Israeli concessions. Whatever it is, it’s ugly. And it’s unworthy of this community.