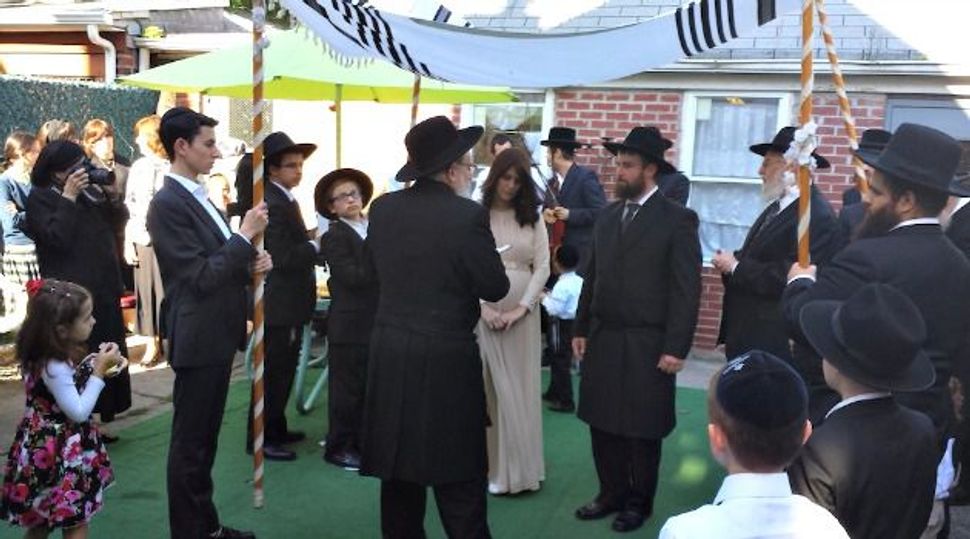 McJunkin Marriage: The newly Jewish Sholom and Nechama McJunkin tied the knot in Brooklyn with a crowd of mostly strangers. Image by Alexander Rapaport

(JTA) — Just in time for Shavuot, with its reading of the Book of Ruth about Judaism’s first convert, a Tennessee family of 12’s conversion to Judaism has prompted an outpouring of support from Brooklyn’s haredi Orthodox community.

On Sunday, Sholom and Nechama (originally Chad and Libby) McJunkin brought their 10 children to Brooklyn to complete 12 conversions and have a Jewish wedding ceremony.

Their wedding, held in the backyard of Rabbi Tzvi Mandel’s house adjacent to his small synagogue in Brooklyn’s Kensington neighborhood, attracted 100 people. Many of the guests were gift-bearing strangers who had learned about the family through an impromptu surprise online wedding registry established Saturday night by Alexander Rapaport, executive director of the kosher soup kitchen Masbia.

The online registry, which was featured Sunday in the Vos Iz Neias newspaper, includes various staples, such as Judaica and kosher grocery gift certificates, for the family’s newfound Orthodox Jewish life. By midday Tuesday it had raised almost $10,000 from 235 people.

In addition, the family was slated to spend Shavuot at a Stamford, Conn., hotel as guests of Gateways, a Jewish outreach organization hosting a retreat there. Meanwhile, a “Jewish-themed” toy store, Toys 4U donated a $500 store credit.

“The hospitality has been outstanding,” said Sholom McJunkin, a carpenter, in an interview with JTA.

“We’ve met so many wonderful people who have showered us with love and gifts,” he added.

The Chattanooga family’s conversions are the culmination of a lengthy spiritual journey, Sholom McJunkin said. The couple, who met in high school, were raised nominally Baptist and became more religious soon after they married.

But after a few years in the Baptist church, the McJunkins felt they weren’t getting satisfactory answers to their spiritual questions. They tried other churches, then eventually found their way to the Amish church. While living in the Amish community in rural Tennessee McJunkin said he first began reading the Hebrew Bible and learning about Judaism.

Two years ago, after leaving the Amish church, the family found the Chabad Jewish Center of Chattanooga, led by Rabbi Shaul Perlstein.

“He’s been a real inspiration to me: his love for the Torah and for the Jewish people,” McJunkin said of Perlstein. Because Chabad rabbis do not oversee conversions, the McJunkins sought out non-Chabad Orthodox rabbis in New York.

Masbia’s Rapaport told JTA he came up with the idea for the wedding registry after Dovid Tzvi Steinberg, a friend of the McJunkins who was seeking help finding a wedding venue for them, called last week and mentioned that he felt the family wasn’t getting as much support from the community as he’d hoped.

“I thought about it and called back and said, ‘We do need to show them some love,’” Rapaport said.

“Obviously people in the religious community can relate to a family with 10 children,” he said, adding that “it’s a simple wedding shower of strangers.”