Is This Palestinian Show ‘Art’ — or Propaganda? 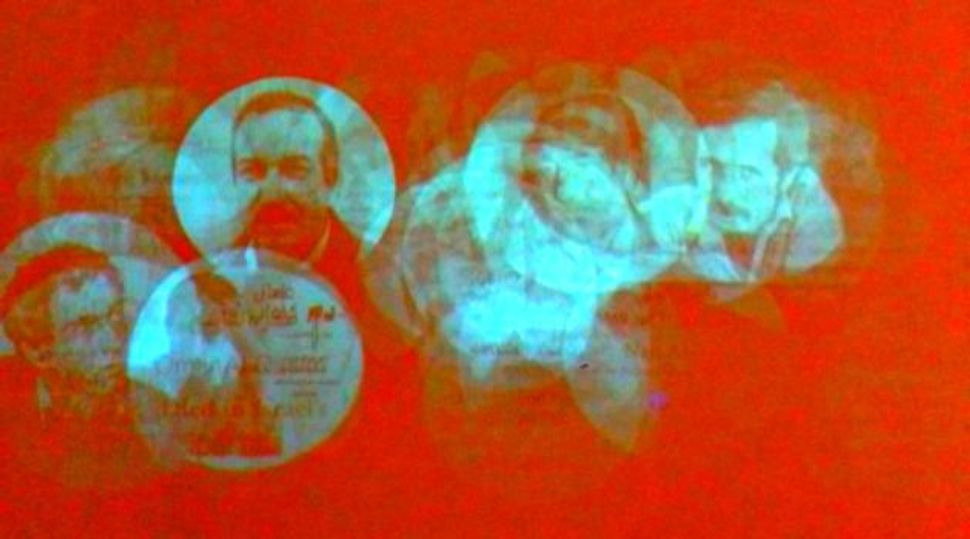 An image from the “Invisible” exhibit in Ottawa, Canada / Mira Sucharov

An art exhibit in a quiet gallery inside Ottawa’s City Hall has caused an international stir. Accusing the exhibit of “glorifying terror,” the Israeli ambassador to Canada met with the mayor to express his concerns. And dubbing it a “monument to terror” and a “travesty,” the Jewish Federation of Ottawa called on the City — unsuccessfully — to remove it.

Titled “Invisible,” the exhibit, by Canadian-based and Palestinian-born artist Rehab Nazzal, is comprised of a series of multi-media experiences. One is a series of colors accompanied by audio from protestors being teargassed in the weekly demonstrations at the West Bank village of Bil’in; another is audio feed from an IDF training exercise-turned-fatal in a Negev prison, with a series of abstract-looking stills on a nearby wall. Most controversial, though, is a digital slideshow called “Target.” In it, a series of names, dates and sepia portraits flash by, each encased in a circle of light. These individuals are Palestinian activists who were assassinated by Israel.

On the day I saw the exhibit, the room was empty, before one or two others wandered in. I flipped through the comments book. The ping-pong nature of the discourse wasn’t surprising. Some thanked the City for bringing the Palestinian experience to light. Others complained of “taxpayer money” funding what surely isn’t “art.” Some pointed to the omission of the fact that those assassinated by Israel were themselves responsible for many murders, and others invoked the “glorification of terrorism” accusation. To that, some responded that surely Israel and its supporters would have no problem featuring Ariel Sharon and Yitzhak Shamir in a similar exhibit.

At least three questions strike me from all this. Those who find themselves offended by the political message inherent in the artwork are demanding context, balance and objectivity. They seem to want to insert footnotes, to proclaim that there is another side to the story. But art isn’t meant to serve the same purpose as a newspaper article, a history textbook or an encyclopedia entry. By its nature, art flows from the experience of the artist. It is necessarily and inherently incomplete, a fragment of expression.

The second is whether the exhibit serves to vilify Israel, and by extension, Jews. In documenting a military raid on a prison in southern Israel presumably filled with Palestinian prisoners, the artwork casts a shadow on Israel’s claims of having “the most moral army” in the world. No country wants its image tarnished, and it’s not surprising that a diplomat would seek to stem the reputational bleeding. But Diaspora Jewish supporters of Israel have taken to internalizing publicity around Israel’s excesses in the kind of defensive way that my armchair-psychologist’s eye can only see as ultimately debilitating. It’s a topic deserving of its own post — but for now, we might ask how and whether we Diaspora Jews can best support Israelis who would pursue legal reform and robust judicial oversight, rather than seek to silence those who would call out our country for moral examination.

But there is still the issue of whether the exhibit, namely the “Target” slideshow, indeed “glorifies terrorism.” As I stood before the work, I considered how various viewers might see it. I understood that viewing those out-of-context assassinations (the artist describes the individuals benignly as writers and artists) would anger some. I can understand that it would seem bitterly ironic that the artist has chosen to render the other set of victims invisible. But curiously, I also sensed that some Israel supporters might even feel a subtle wave of nostalgia for the days where Israel’s top-notch security services were able to eliminate enemies with impunity. And even better when precision strikes took out only the target, when luck and intelligence were on their side. It’s a feeling that’s easy to recall from seeing the film “The Gatekeepers.” There, the former heads of Shin Bet sometimes visibly grinned about their victories. But they also issued a somber warning: for what, ultimately, is this game of Israeli-Palestinian cat and mouse?

Those who oppose the exhibit have been unsuccessful in demanding its removal. Instead, a disclaimer has been posted at the entrance to the gallery, reminding viewers that the artwork is selected by an “independent, professional arts jury” and the views contained within do not represent the views of the City of Ottawa. A gallery employee told me that, in light of the controversy, the disclaimer sign will remain up for future exhibits.

The question is whether future viewers will be able to take in the art for what it is: a sentence in an ongoing societal conversation. How we respond to those sentences, how we build on them to form a story of our intertwined existences, will ultimately signal where our civilization is headed.

Is This Palestinian Show ‘Art’ — or Propaganda?