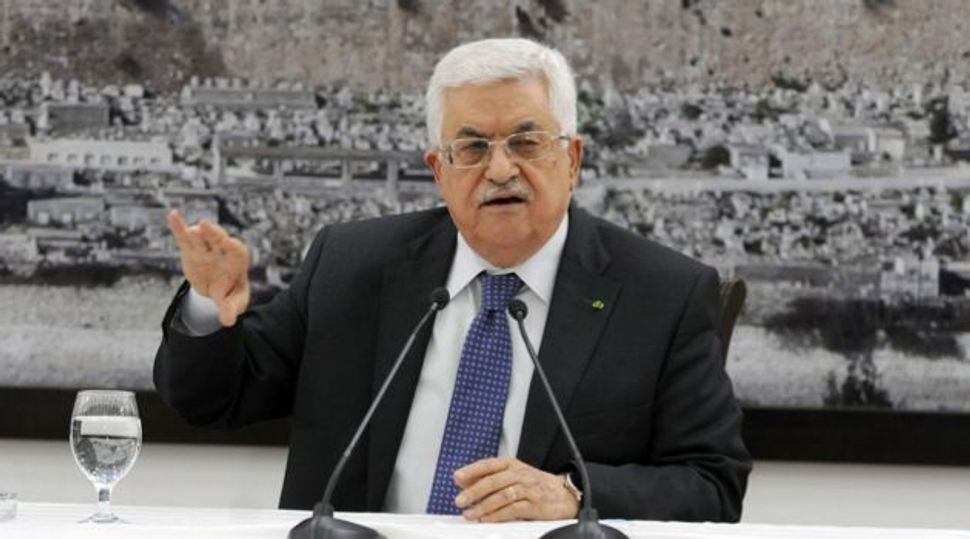 Good Faith: According to Israeli sources, Mohammed Abbas has made real concessions in the peace process. Image by Getty Images

Among the Israeli government’s favorite mantras is the allegation that “we have no one to talk to.” Alas, that stance is faulty on two grounds: It implies both that the “other side” — that is, the Palestinians — do have someone to talk to and that the Palestinians themselves have nothing constructive to say.

Do the Palestinians have someone to talk to? Consider: There are 20 members of Benjamin Netanyahu’s Likud Party in Israel’s parliament, the Knesset. Of these, only three (including Bibi, whose enthusiasm for such a solution hovers near zero) publicly support a two-state solution. The other seventeen have made statements that oppose — in varying levels of intensity — the creation of a Palestinian state.

Here, for example, is Likud Knesset member Ofir Akunis: “Construction will continue so that a Palestinian state will not arise in Judea and Samaria [the West Bank].” And here, just a few hours after Secretary of State John Kerry had said, “A two-state solution is accepted by both sides,” is Israel’s Deputy Foreign Minister [Likud], Zev Elkin, approvingly quoting Netanyahu’s formulation: “Saying ‘yes’ to a Palestinian state means saying ‘no’ to a Jewish state — and saying ‘yes’ to a Jewish state means saying ‘no’ to a Palestinian state.” And Uri Ariel, Minister of Housing: “There are not two states west of the Jordan; there is only the State of Israel.”

Or perhaps most tellingly, the words of a rising star in the Israeli firmament, Naftali Bennett, currently Minister of Economics and Trade: “The experiment to create a Palestinian state within our country is finished.” He described the creation of such a state as “impractical,” insisted that the “Palestinians have no right to self-determination nor to a state between the Jordan river and the Mediterranean Sea. Whoever travels through Judea and Samaria knows that what’s said in the cafes of Annapolis and Oslo is severed from reality. There are today 400,000 Israelis who live in Judea and Samaria and another 250,000 in East Jerusalem.” And, “The most important thing in the Land of Israel is to build, to build, to build. There needs to be an Israeli presence in every place. The essential problem remains the unwillingness of the leaders of Israel to say in plain language that the Land of Israel belongs to the people of Israel. We have to say to ourselves and to the whole world that this has been our land for 3000 years. There has never been a Palestinians state here, and we were never conquerors. The house belongs to us, and we are its tenants, not its conquerors.”

[Note: References to “the Land of Israel” as distinguished from “the State of Israel” imply the entire land between the Jordan and the Mediterranean — i.e., all Israel and all the West Bank.]

And do the Palestinians have something to say? Here, according to Nahum Barnea, allegedly based on information from Martin Indyk, is the position of the Palestine Authority, as articulated by its president, Mohammad Abbas:

The Palestinian state would be demilitarized.

A new border would leave 80 percent (!) of the settlers under Israeli sovereignty.

A five-year-long Israeli presence in the strategic “security zones — mostly the Jordan Valley — that would be replaced by American forces. (This means Abbas actually offered to make the Palestinian state an enclave inside Israel for a very long period of time.)

All Jewish neighborhoods in East Jerusalem would become part of Israel. (In other words, recognition of Israel’s annexation of certain parts of the city.)

A symbolic return of refugees, which would depend on Israeli authorization. “Israel will not be flooded with refugees,” Abbas said during the negotiations, according to the American source.

Accordingly, The Israelis do, indeed, have someone to talk to, if they are interested in talking. And the Palestinians have something to say. It simply will not do any more (if ever it did) for the Israelis to take refuge in the “there’s no one to talk to” mantra.

One needn’t take all that Abbas has said at face value. But surely it is enough to kick off a conversation. From Netanyahu’s perspective, however, the voices he hears are not those of the Palestinians but those of his own colleagues, of Bennett et al. Should he respond to the Abbas position with interest, his government would collapse. Were he to pledge himself to support a two-state solution and specify reasonable conditions for such a resolution of the conflict, he might be able to form a center-left coalition government, But nothing in Netanyahu’s past renders that more than wishful thinking.

Prescription/prediction? More of the same, until the next intifada. Here it is apposite to conclude with a quote from Langston Hughes, going a bit farther than the usual reference to just its first two questions:

What happens to a dream deferred?
Does it dry up like a raisin in the sun? Or fester like a sore — and then run? Does it stink like rotten meat? Or crust and sugar over — like a syrupy sweet? Maybe it just sags like a heavy load.
Or does it explode?