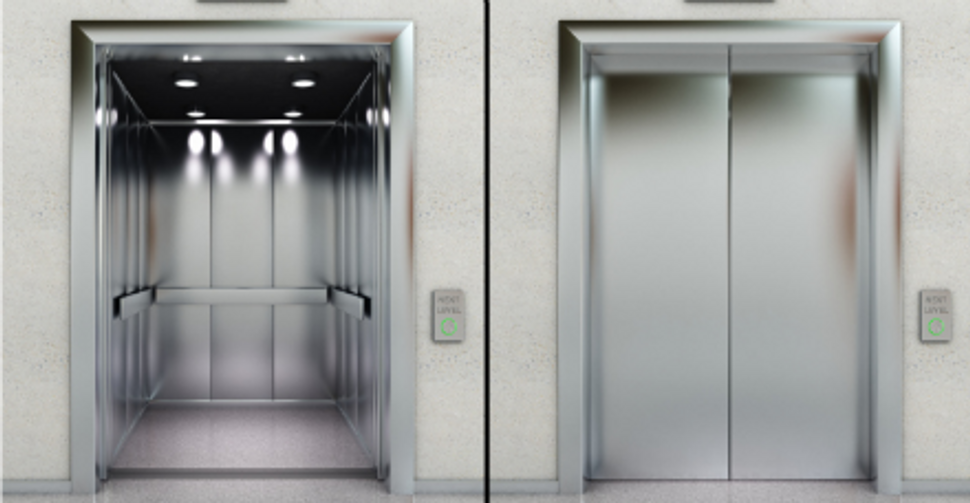 Yosef Cohen, the owner of Jerusalem’s ultra-Orthodox event venue Armonot Chen, has started divvying up elevator space using a nylon mechitza, with stickers inside and outside the elevator directing men to one side and women to the other.

“There are people who want to guard their eyes on the wedding day,” Cohen explained in an interview with Walla news. “If four men and four women enter the elevator, how will they behave? This way there is a mechitza and this solves the problem.”

Phew! Finally, we can rest easy knowing that Jerusalem’s ultra-Orthodox couples aren’t going to be canoodling — in groups of eight, no less — on their way up to their friends’ wedding ceremonies! I was really worried about that one for a while, you guys.

But wait — what about other areas of the venue? What’s to stop these people from going at it, say, on the staircases leading up to the building?

Not to worry: Cohen’s on it. The stairs, he says, will soon be gender-segregated, too.

Lest anyone think that this might be taking it just a shade too far, Cohen explained, “This separation is not imposed by force. The mechitza can be installed and taken down within 30 seconds. This is not the Berlin Wall.”

Gender-segregation is not a new phenomenon in Israel. In fact, it’s been on the rise for the past few years. As the society as a whole shifts rightward, it’s becoming increasingly normalized — so normalized that people like Cohen don’t seem to realize they’re creating “solutions” to a problem that doesn’t actually exist — a problem that, a few years ago, wouldn’t have been considered a problem at all.

As a matter of fact, in Cohen’s view, if you find his gender-divided elevators and stairways problematic, you yourself are the problem. “If this bothers you, you’re probably corrupt,” he said. “How is this bothersome? A man wants to protect his eyes — that’s his right.”

If you find yourself wondering, at this point, about the right of women not to be treated as if the very sight of them is an inherent, inexorable temptation to licentiousness — not to be, in other words, hypersexualized — well, that’s just a sign of your own corruption.