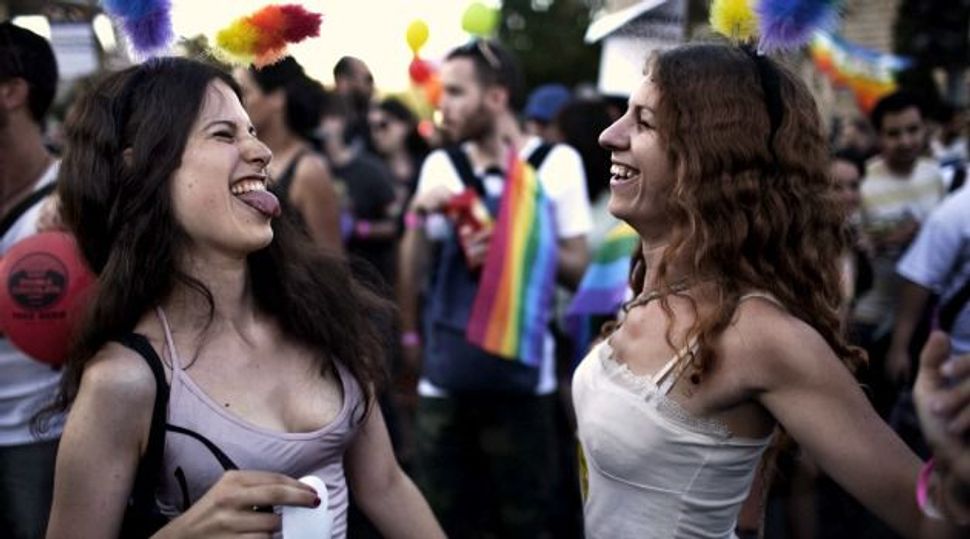 What do you reckon is the busiest time of year for Tel Aviv’s hotels — maybe the High Holidays? Perhaps Christmas/New Year’s, when America’s families are on vacation? How about Gay Pride Week?

With the annual Gay Pride parade scheduled for this Friday, Tel Aviv’s hotels are doing booming business, and anyone who didn’t book a room in advance is probably out of luck.

The Marker, Haaretz’s daily business section, reported on Wednesday that

… According to a hotel manager in the city, “It’s the busiest time of the year…. There are guests who made reservations six months ago. I’ve known for three months that I’m completely full.”

City Hall has gotten in on the act, cooperating with local hotels to promote Tel Aviv as a gay travel destination, not least because — unlike visitors who come on pilgrimage — Pride tourists tend to stay in boutique hotels, rent cars and go shopping. Moreover, life on the Mediterranean presents an opportunity for year-round event planning that’s impossible in Europe. If Tel Aviv plays its cards right, folks who visit in June might very well come back in January.

Yaniv Weizman, city councilor and head of the municipality’s tourism division, says, “The gay tourist will always leave more money, he’s more of a spendthrift. The community’s matured, [there are] many tourists in their 40s who have quite a bit of money, and they leave it in Israel.”

So Tel Aviv’s message is clear: Come, have fun! We love your party attitude and your wallet!

To which Israel’s national government can only add: Just don’t fall in love and try to get married.

Even as Tel Aviv was raking in that sweet, sweet gay cash, a few miles away in Jerusalem the Knesset spent Wednesday rejecting a marriage equality bill. This anti-Pride Parade, if you will, was made possible to a large extent by the ostensibly liberal Yesh Atid party, headed by Yair Lapid; Lapid has said time and again that he plans to offer an alternative to the legislation proposed by Labor MK Stav Shaffir, but he has yet to present so much as a draft. Prime Minister Benjamin Netanyahu was so dedicated to defeating Shaffir’s bill that he took time out of his busy schedule to come to the Knesset chamber for the sole purpose of voting against it.

Parades and expensive hotel rooms are nice. But I have a funny feeling that the LGBTQ community might like civil rights even more.