Why Eric Cantor’s Loss Will Hurt Jewish Democrats, Too 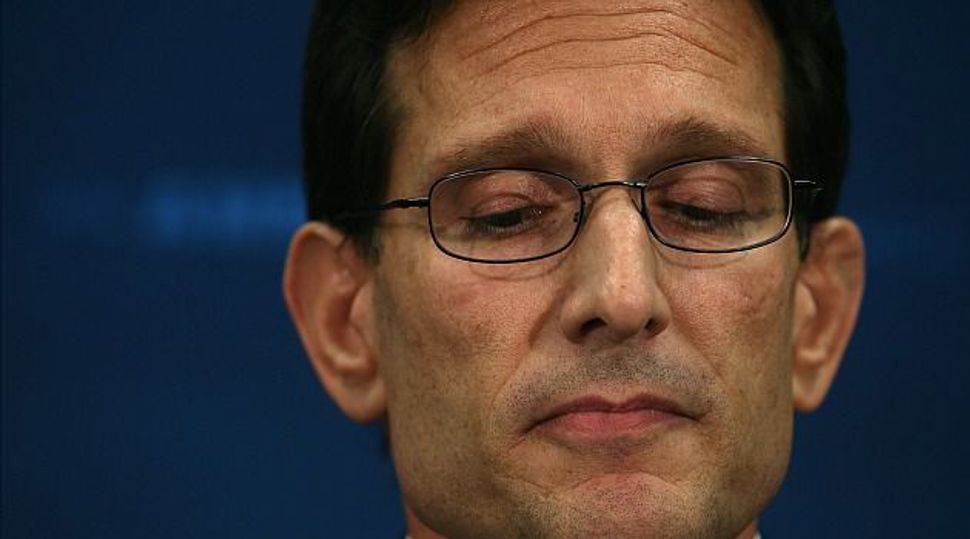 Don’t Laugh Now: Eric Cantor’s misery should be a scary sign of things to come for Democrats as well as Republicans. Image by getty images

There is a gleeful air among liberal Jews about the political demise of Eric Cantor, and perhaps that is a credit to Cantor’s effectiveness. Nobody ever rejoices at the self-immolation of an incompetent opponent. If Cantor was not good at opposing the liberal agenda, liberals would certainly bemoan his loss.

Yet Cantor’s sudden disappearance will deliver no benefit whatsoever to those liberals. He will likely be replaced as majority leader by someone just as conservative — if not more so. He most certainly will be replaced in Congress by someone even more conservative.

If you’re interested in actual policy and getting stuff done in Washington, this is a loss. Cantor had the confidence of the Republican base, including the tea partyers. The national tea party groups were not targeting him. If they’re taking credit for his downfall now, they’re simply jumping on the bandwagon.

Truth be told, the tea party wing of Congress was fine with Cantor. They didn’t love him, but they didn’t hate him, and most importantly, they respected him. Even if you disagreed with Cantor, at least you knew where he stood and you knew what he could deliver, policy-wise. So if you actually care about the business of government and laws getting passed, this is a loss. Because Cantor was one of the more responsible members of the Republican caucus.

As a Jew and a Republican, I’m sorry that Cantor lost, but I didn’t need Cantor for me to be a Republican. I am certainly not worried about my place in the Republican Party.

Of course, I’m not surprised to see liberal Jews think that identity politics — so critical to their world view — will help push some Republican Jews, stung by the loss of a high-ranking Jewish Republican, back into the Democratic column.

But some of us have evolved from such base considerations. I vote and support anyone who I think represents my point of view — regardless of his or her religion or ethnicity. I didn’t need Eric Cantor to assure me that the Jews would be welcome in the Republican Party, and I’m confident that other Jewish Republicans feel exactly the same way.

But consider this: It takes a really motivated base of voters to produce a wave election where political giants fall. The tea party folks are really motivated to get some people into office they trust and who won’t go wobbly on them. That spells for a repeat of 2010 — which should terrify every Democrat in a toss-up or near toss-up district.

Does that give the Democrats a two-year pass where they can paint the Republican Party as hopelessly xenophobic? Not so fast.

Now the focus will shift from the policy and legislative story to the actual issue — what does immigration, both legal and illegal, look like right now? Reporters will pay attention to the people “waiting” — the thousands of people, many of them children, who are being warehoused near our southern border.

The stories from these refugee camps will increasingly capture the nation’s attention and crystallize the problem. The humanitarian crisis will overwhelm the discussion over any sensible reform ideas. Again, the nation will wonder whether anyone controls the borders, or anyone is trying. And that is not a winning discussion for the Democrats, whose leader — Barack Obama — gets to decide how to control the border.

And finally, remember this: Every Senator and Representative now realizes how much the country hates Congress and all incumbents right now. Obama’s poll numbers are at their lowest level ever.

So any chortling Democrats should be careful. They’re like people in Connecticut gloating over a blizzard hitting New Jersey. That blizzard is coming, and it is going to hit just as hard.

Why Eric Cantor’s Loss Will Hurt Jewish Democrats, Too