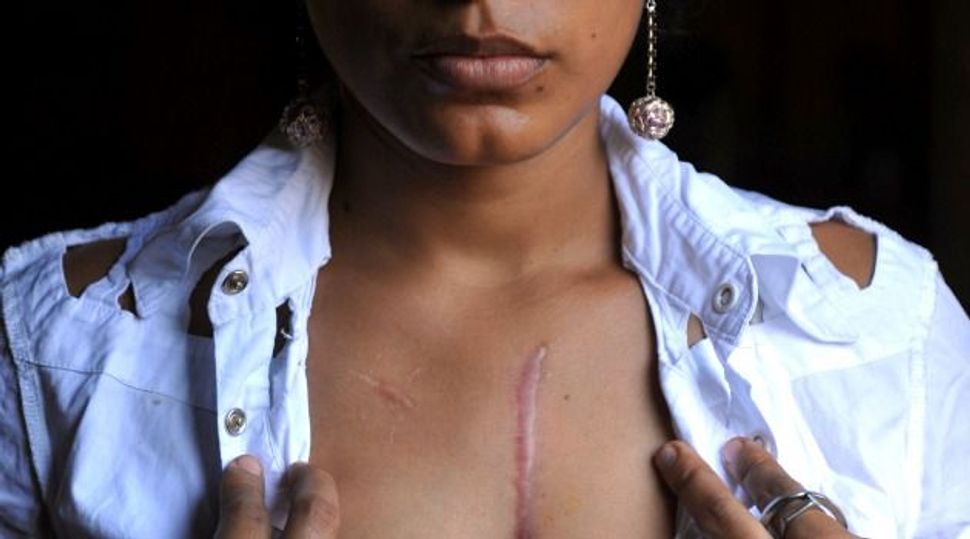 What does it mean to be a man in the world? This question looms large in public life, especially on the heels of Twitter’s recent #YesAllWomen campaign — a social media initiative that drew attention to the prevalence of violence, harassment and discrimination against women around the globe. On Father’s Day, it weighs heavily on my mind. This day should serve as a powerful moment for us to ask ourselves and each other, as Rabbi Abraham Joshua Heschel did in the title of his Stanford University lecture series, “What is a Man?”

I am a father of two daughters and a son. Tragically, the likelihood that my daughters will encounter violence in their lifetimes is extremely high, and it fills me with anger and fear, concern and worry.

A few sobering facts: According to a 2013 global review of available data, 35% of women worldwide have experienced intimate-partner violence or non-partner sexual violence; national violence studies show that up to 70% of women have at some point experienced violence from an intimate partner; and more than 64 million girls worldwide are child brides.

When I reflect on these statistics, I am reminded of women whose experiences of violence are largely hidden from the public sphere. Consider Teresa, a Nicaraguan woman who married her husband when she was 19 years old. Teresa agreed to follow her husband anywhere, including the community of San Rafael, Nicaragua — a very remote, rural area. Teresa and her husband had six children together — three sons and three daughters — and lived on four acres of farmland nestled in the mountains.

For 30 years, Teresa suffered relentless abuse by her husband. He molested all three daughters as they “became women” and insisted on having his own bed very close to theirs. Often, he would wake up at night to rape them as they slept.

In the community of San Rafael, people tend to believe that women consent to sexual abuse, and many villagers believed that Teresa had condoned the rapes of her own daughters.

Terrified of what might happen if she spoke out, Teresa stayed with her husband even though the violence persisted. She had no means to support herself independently, and her home and land were registered in her husband’s name, not her own.

One day, Teresa was listening to the radio and heard about an organization called the Association of Entrepreneurial Women of Waslala (AMEWAS) — a Nicaraguan grassroots group, supported by American Jewish World Service (AJWS), that seeks to decrease violence against women, girls and youth by educating women about their rights, promoting gender equality and expanding women’s access to the judicial system. With encouragement from her friends and one of her brothers, Teresa decided to seek AMEWAS’s help.

While her husband was away, Teresa traveled with all of her children to the town of Waslala, where AMEWAS is headquartered, to stay at AMEWAS’s women’s shelter.

AMEWAS supported Teresa to press charges against her husband, and, in 2011, he was sentenced to 12 years of imprisonment. AMEWAS was able to transfer the title of his property to Teresa. Thankfully, Teresa and her children now live on their land independently, without the threat of violence and abuse.

This story of pain and resilience, like so many others, has inspired me to devote my time, means and energy to building a world in which women and girls live free from violence and fear.

On a national level, I have taken action in signing a petition to urge Congress to pass the International Violence Against Women Act (IVAWA), a critical piece of legislation to ensure that the U.S. government increases efforts to end violence against women and girls worldwide.

On an inter-personal level, the change begins with me. I am a man. I am a partner. I am a father. I cannot ignore the Jewish teaching to recognize the Divine Image in all people — no matter their gender. It begins with me, my attitudes and my actions.

Can I be a man who models and teaches behavior that leads to a world in which women and girls live free of fear of violence? I pray I can. I must. So must every man. I believe the world depends on dignity, and I have a mandate as a man to dissolve attitudes that strip away the dignity of women and girls and lessen their humanity.

This Father’s Day, I invite all fathers to reflect on our attitudes, behaviors and relationships with women and girls. If every father reflects on these relationships, we can change the frightening statistic that one in three women will likely be beaten, coerced into sex, or otherwise abused in her lifetime. Together, we must teach our sons and future generations of fathers to live the essence of our tradition; to celebrate the inherent dignity and equal value of all people to mend our broken world — for our mothers, our sisters, our daughters, and for women like Teresa.

Rabbi Menachem Creditor is the rabbi of Congregation Netivot Shalom in Berkeley, California and on the board of directors of American Jewish World Service.