Why Isn’t Alan Gross on Next Plane Home After Bowe Bergdahl? 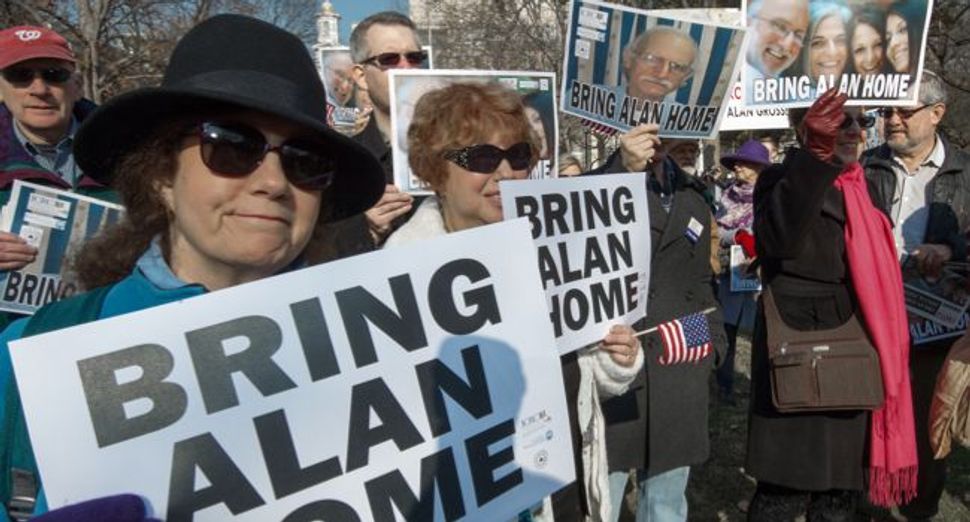 Captive: Protesters rallying around the cause of freeing Alan Gross. Image by Getty Images

The Obama administration’s bungling of its media strategy with the release of the captive Army sergeant Bowe Bergdahl has obscured the essential fact that negotiations — even with interlocutors we can’t stand — do work. Anyone doing the American government’s bidding overseas deserves our protection and, if problems arise, our commitment to get him or her home expeditiously. That includes Alan Gross, who’s been sitting in a Cuban prison for four and a half years.

The activities Gross was conducting in Cuba when he was arrested at the end of 2009 were instigated, approved and fully funded by the government. Part of the $45 million-a-year core of the Bush administration’s Cuba regime-change strategy, Gross was simply carrying out policy that was embraced enthusiastically by senior officials. Washington cannot hide from that responsibility any more than it could deny that Bergdahl was an American soldier.

The Cuban government arrested and convicted Gross for three main reasons: Through his work in the “democracy-promotion program,” he violated Cuban law (and, as his trip reports made clear, knew he was doing so); Havana wanted to rein in activities similar to his, and the Cuban government, believing President Obama’s early rhetoric about a “new beginning” in bilateral relations, saw an opportunity to force Washington to engage in credible dialogue.

The Obama administration rejected the Cubans. It denigrated Cuban laws — even though a Cuban government agent would face serious charges if caught in the United States setting up sophisticated covert communications networks, as Gross was in Cuba. After initially undertaking a series of reforms to clean up the regime-change programs, the administration reneged under pressure from the handful of Cuban American legislators who want the operations to be as provocative and well funded as possible.

So Gross sits and waits, and Bergdahl, despite some possibly questionable personal behavior, comes home. How could the administration negotiate with a group like the Taliban but give Cuba, which poses no threat to the United States, a sharp elbow in the face?

There are, of course, many differences between Bergdahl and Gross. One wears a photogenic military uniform with an American flag on the shoulder, the other a guayabera in need of ironing. One is a noncommissioned officer in the U.S. Army, the other a civilian subcontractor. One was in the custody of terrorists known for cutting off limbs and committing torture, the other in the custody of a government we don’t like, in a hospital cell and with good medical care.

Arguments on their behalf in Washington have also been radically different: Bergdahl’s advocates emphasized that a man should never be left behind by the military and that the administration should get him home. Gross’s strongest advocates in Congress — the people who defend his secret activities and stridently demand his unconditional, unilateral release — have opposed negotiations and forcefully urged ramping up the regime-change programs to provoke Havana. (Senator Patrick Leahy is the clarion exception; he’s called the programs “nuts” and suggested we talk to the Cubans.)

But the similarities between them are more important. Both were carrying out operations approved by, and on behalf of, the U.S. government. Both knew the risk of jail or, worse, that they were running as U.S. agents and both knew the limitations of what the government could do to help them. Both accepted special payments or allowances for that risk. Both were obviously conducting activities intended to undermine the legitimacy and authority of their keepers — indeed, destruction of the Taliban infrastructure in Afghanistan and regime change in Cuba. Both have claimed — albeit using the word in different contexts — to be hostages.

The similarity that trumps all others, however, is our moral commitment to them. Anyone working on behalf of the U.S. government deserves our most fervent efforts to bring him or her home safely and swiftly. Why exclude Gross from this solemn contract? Because he wasn’t a full-time government employee? Because some in Washington — those who don’t want progress in Cuban relations — see political advantage in keeping this obstacle in place? Because we are embarrassed by the naivete of his government patrons, who believed that covert action by an untrained subcontractor would help overthrow the Cuban government?

Only the Cubans know their bottom line for reviewing Gross’s case and granting him a humanitarian release, but successful negotiations on other matters over the years — immigration issues, troop withdrawals from Africa and other matters — set an ample precedent. The Cubans are tough, focused and (like us) often infuriatingly concerned about appearing weak. But they’re smart, know that our two countries’ interests can be served by the give-and-take of negotiation and have a good reputation for implementing agreements.

To get Bergdahl home, Obama released five pretty tough Taliban commanders, and it’s probably more than a coincidence that the previous week, on May 25, he deepened his commitment to “bring America’s longest war to a responsible end.” Havana’s price will be much more reasonable. The much-bantered proposal to swap Gross for the remaining of the “Cuban Five” prisoners in U.S. prison — serving on espionage charges — may not be as immutable as Havana’s rhetoric would suggest. (They’re certainly a lot less scary than Taliban who are not likely to have fond memories of their Guantanamo stay.) Cuban policymakers are, if anything, realistic in their expectations of what Obama can do. And they would not expect a dramatic announcement from No-Drama Obama regarding a bold strategy to normalize relations.

Instead, the administration should do what the Cubans have wanted all along — clean up the regime-change programs, which, as carried out, have achieved nothing and cost us much, and talk to them. Neither would be very hard. Cuba’s rhetoric toward the United States has changed in recent years, but Washington’s has not. If Havana is willing to forgo the comfort of Cold War enmity and slogans, why aren’t we? There’s a lot to talk about — including getting our man in Havana, Alan Gross, back home.

Fulton T. Armstrong is the former senior adviser to the Senate Foreign Relations Committee chairman and is a former U.S. national intelligence officer for Latin America.

Why Isn’t Alan Gross on Next Plane Home After Bowe Bergdahl?