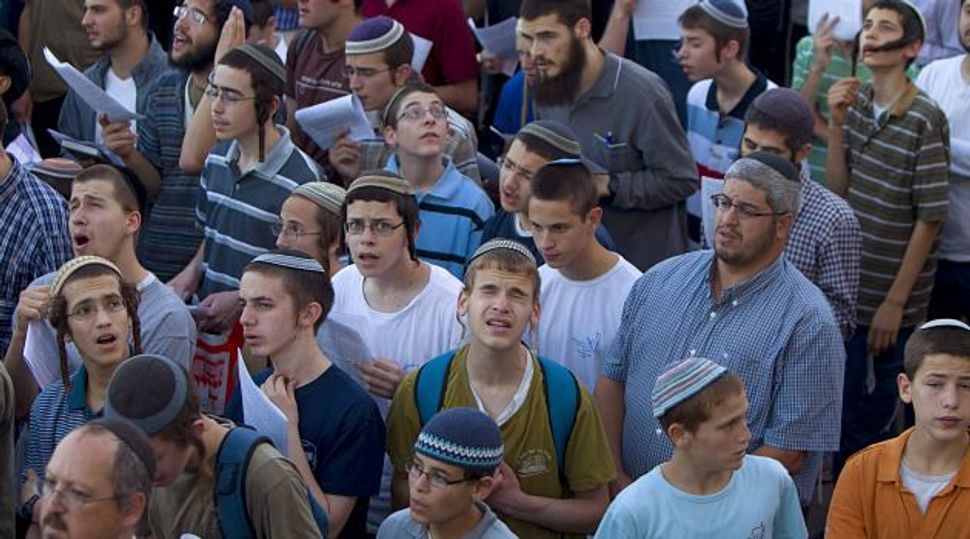 On Monday the New York Times reported that the recent abduction of three Israeli teens in the occupied West Bank has raised a “hushed debate [within Israeli society] over the conduct of Jewish settlers.”

While I think it’s fair to point out that Israel’s reactions to the kidnappings have been marked more by anger and prayer than debate (however hushed), the simple fact that any questions whatsoever have been posed in conversation with an American reporter is significant and reflects a broader shift in attitudes toward the settlement project.

Earlier this month, Justice Minister (and one-time right-wing stalwart) Tzipi Livni was quite blunt: “It’s time to say things exactly as they are: The settlement enterprise is a security, economic and moral burden that is aimed at preventing us from ever coming to [a peace agreement].” Moreover, a recent study found that a growing majority of Israelis no longer support that enterprise.

It’s important to note, however, that if the citizenry shares Livni’s general sense of disapproval, they do not appear to share her reasoning: 71% of those surveyed say settler violence against Israel’s military keeps them from “identifying with” their settler brethren; 59% say the settlements are bad for Israel’s relationship with the U.S. The violence of some settlers against Palestinians, the financial drain on Israel’s increasingly inequitable society, or the obstacle that settlements pose to achieving a workable resolution of the conflict do not appear to be major concerns. In fact, while 52% support a full or partial withdrawal from occupied territory in the framework of an accord with the Palestinian Authority, 31% support full or partial annexation — where the difference lies between partial withdrawal and partial annexation is unclear.

Or in yet other words: Israelis aren’t bothered by the settlements; they’re bothered by a set of settler behaviors. If the settlement leadership manages to restrain its hotheads and put together a winning public relations campaign, there’s every chance that mainstream public opinion will swing back toward complacency, and Israel’s increasingly isolated left will once again be alone in its active condemnation of Israel’s policies on the West Bank.

International law and common decency mitigate powerfully against the capture of non-combatants as an act of war; there’s simply no question that Gilad Shaar, Eyal Yifrach and Naftali Frenkel should never have been nabbed, and must now be returned home — safe, and sound, and soon.

Yet it’s remarkable that the people who are now glued to hourly news reports and their Book of Psalms have not yet fully grasped, after 47 years, that where there is no peace there will be acts of war, and that settlements are not a problem because settlers are sometimes unpleasant — they are a problem because they make peace impossible.