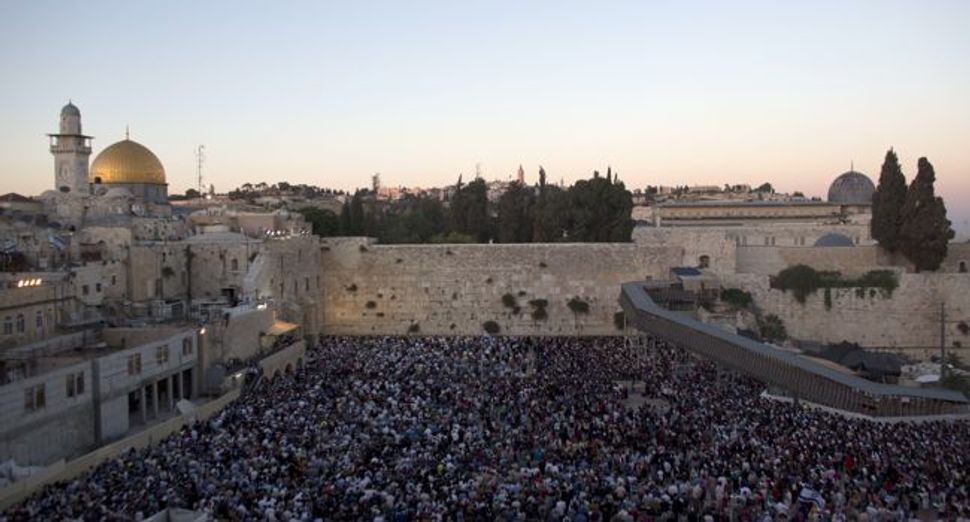 Beseeching: Thousands of Jews gather for a mass prayer at the Kotel. Image by Getty Images

Sad and frightening events can summon exemplary reactions, as we have seen in the recent coming together of diverse parts of the Jewish world to express collective anguish over the three boys who were abducted in Israel, and unified prayer for their return soon to their families, to us all.

Less inspiring, though, are the other sort of reactions that such crises can at times evoke, like those the current one sadly has in the form of finger-pointing and, more distasteful still, demeaning the value of prayer.

In these pages, Leah Bieler, a graduate of the Jewish Theological Seminary, expended many words to describe her toddler’s disappointment at a cancelled television show, endeavoring to compare the child’s outrage to the “tone” of some of the appeals she received to pray on the missing boys’ behalf. If any of those appeals, as she insinuates, in fact read as something akin to, as she puts it, “Say these psalms or else,” they were indeed tasteless. (None of the many I received implied any such threat.)

Bieler’s own tone, however, seems to be disparaging of the very idea of prayer as meaningful, in any but a psychological or sociological way. Prayer, she writes, “can help create and maintain empathy” and “heal wounded souls.”

But what the writer chooses to call “prayer as a magic trick” is something else. She seems to feel that since our prayers are not always answered in the way we wish, that the entire enterprise must be faulty. So much for the myriad Jewish sources — from our forefathers Abraham and Isaac’s prayers for children, to our ancestors’ beseeching of Heaven during their sojourn in Egypt and post-exodus battle with Amalek, through countless Talmudic instances of prayer qua prayer, that is to say as an actual means of effecting a result — in our collective history. So much for our High Holy Days declaration, “Uteshuvah, utefillah, utzedakah maavirin es ro’ah hagezeirah!” — “Repentance, prayer and charity can overturn a ruinous judgment!” So much for the Talmud’s teaching that “G-d pines for the prayers of the righteous” (Yevamot, 64a).

Then, in Haaretz, Samuel Heilman, a sociology professor at Queens College, offers his own less-than-enthusiastic thoughts on the subject. He spends much of the space allotted him on expressing outrage at what he perceives as West Bank yeshivot’s inadequate efforts at providing secure transport of their students. I am not qualified to have an opinion about that, and so must leave it to those yeshivot to either plead guilty or defend themselves. But the professor doesn’t suffice himself with condemning those institutions; he leverages his pique into a harangue against… you guessed it, prayer. “What,” he asks in righteous indignation, “have the yeshivas, and much of the religious community, done?”

“Their big response,” he sniffs, “is to recite Psalms — and encourage others to do so too.”

Of course, he hastens to inform the reader that he personally is a “believer in the power of prayer” and even recites Psalms daily himself. But the message of his piece is none of that, but rather that assigning ultimate import to prayer is “a smug feeling that ‘we’ are truly doing what ‘needs’ to be done.”

To be sure, there is much to be done in such times of crisis like this, politically, militarily and communally. No one has ever claimed that prayer absolves us of doing what natural, concrete things we can — hishtadlut, in the favored term, “this-world effort” — to deal with challenging situations. But for those of us who are neither politicians nor soldiers, prayer is what we can harness. And it is, in Jewish theology, no mere salve for the soul but what in the end can render our this-world efforts effective (they aren’t always, of course). Prayer not only matters, it matters most.

How? A clue likely lies in the structure of the Hebrew word for praying — li’hitpallel, an odd verb in that it exists only in the reflexive form, indicating that it involves doing something to oneself. Jewish commentaries have suggested that prayer is meant to change oneself, perhaps implying a morphing from someone who didn’t care enough about something but has now taken the effort to express care, and thus changed. And that change is a real and actual merit; sufficient such merits can effect change in what we call reality, even “overturn a ruinous judgment.”

No, not all our prayers are answered as we wish. No prayer, however, is without its impact. It has been suggested that every unanswered prayer is preserved and can contribute to a critical mass of prayers that may bring about a happy result at a future time of crisis. For every prayer, in the eyes of Judaism, is precious. Contrary to what the critics say, it is a big response indeed.