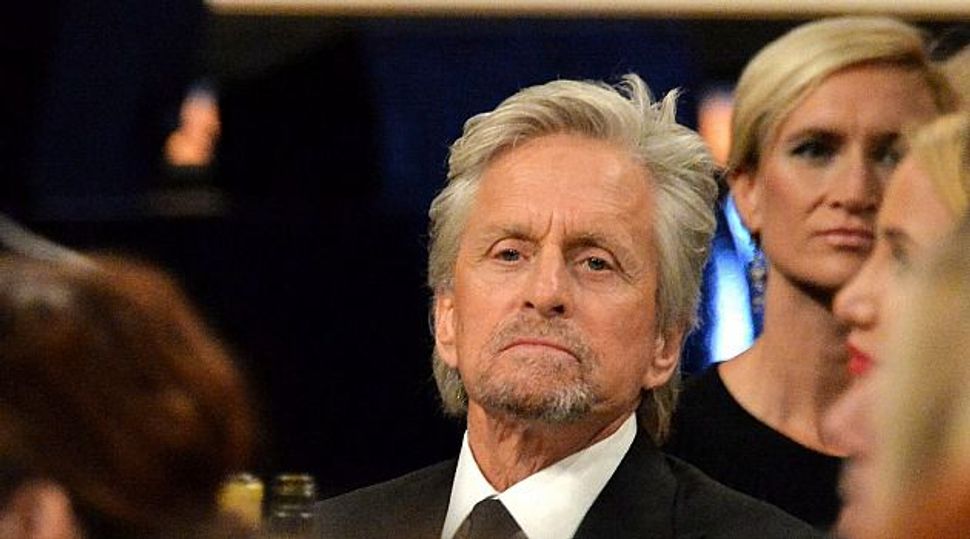 Ynet reports that Michael Douglas and Catherine Zeta-Jones are in Jerusalem with their children as part of the bar mitzvah celebration of their son Dylan.

Eyewitnesses reported seeing them check in two days ago to the King David Hotel, where they’re staying in the presidential suite at a reported cost of 19,000 shekels ($5,400) per night. Shortly after checking in they’re reported to have set out for a tour of Jerusalem, ending with a visit to the Temple Mount tunnels, which are an incredible experience if you haven’t done it yet. (Here’s the 4-minute tour; here’s the 50-minute tour.)

Alert readers will recall that Douglas showed up at a public event in New York City in early May walking with a limp, which he explained as an injury to his groin that he suffered while being lifted in a chair at the bar mitzvah ceremony itself.

Douglas is the son of Kirk Douglas, who was born Issur Danielovitch (early in childhood he became Issur “Izzy” Demsky) and his first wife, Diana Dill. The elder Douglas started exploring religion under the influence of Aish HaTorah after narrowly escaping death in a 1991 helicopter crash, and since then he’s expressed regret on several occasions that he neglected his Jewish identity for so many years and never raised his sons as Jews. It’s a bit odd, considering that he filmed two movies in Israel before it became fashionable post-1967, at a time when hardly anyone was visiting Israel, much less promoting it.

The first one, the critically acclaimed 1953 “The Juggler,” about a Holocaust survivor who comes to Israel, struggles with his past and finally comes to terms with it on a kibbutz, was the first Hollywood feature film to be made in Israel. The second, the 1966 war pic “Cast a Giant Shadow,” is a biopic about Colonel David “Mickey” Marcus, the American World War II military hero who volunteered to fight in Israel’s war of independence and ended up accidentally getting shot by an Israeli sentry because he didn’t understand the Hebrew warnings. We should all be so assimilated.

Son Michael is frequently described as not identified with any religion, and then people get all surprised every time his involvement with Judaism reaches the public eye again, as it did with his son’s bar mitzvah. In 1998 Douglas helped organize a two-hour CBS network special celebrating Israel’s 50th anniversary. That same year he gave an interview to Haaretz weekend magazine in which the reporter asked him about the film industry and the star system and Douglas repeatedly needled him about the fact that Israeli officialdom didn’t consider him Jewish. In 2000 there were rumors that Zeta Jones was considering converting to Judaism in advance of their marriage. Apparently she never went through with it, and her publicist denied it, but witnesses reported her meeting with rabbis and discussing it.

The bottom line: in intermarriage and Jewish identity, as in life itself, you never know.