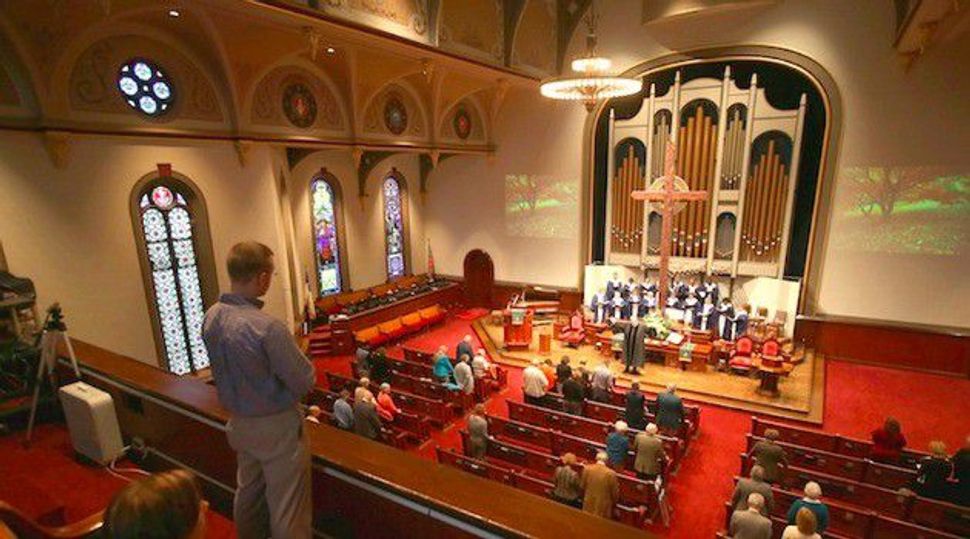 From the Pews: The Presbyterian divestment votes doesn’t look like harmless nonviolent protest from Israel. Image by Getty Images

In a hotel ballroom in Jerusalem jammed with journalists from all over the Jewish world, Prime Minister Benjamin Netanyahu delivered a rambling speech that covered everything from Iran’s nuclear ambitions to an Israeli cow that he claims produces more milk than any other cow in the world. Really.

But I want to focus on his riff about the Presbyterians.

This was June 22, the day after the Presbyterian Church (USA) voted to sell off its stock in three American companies who manufacture products they claim are used to further Israel’s occupation of the West Bank. Netanyahu mentioned the vote in the context of global anti-Semitism. Then you could sense he was extemporizing.

He invited the Presbyterians to come to the Middle East and look around. He’ll arrange a bus tour through Libya, Syria, Lebanon, Iraq. But the bus will need armored plates, he suggested. And the visitors should not announce that they are Christians. Then they should compare what they see to Israel, the “only beacon of freedom” in the region.

This was said in the snide tone Netanyahu employs when you are not sure he is trying to be funny or just being mean. I thought he verged on the obnoxious.

But, dammit, he had a point.

The fate of Christians in the Middle East in the last decade has ranged from precarious to tragic. Since the American invasion of Iraq in 2003, as many as two-thirds of that country’s Christians have fled their homes, according to a report published in May in the Huffington Post. Since March 2011, 450,000 Christians have been displaced by Syria’s civil war.

And in Egypt, attacks on Coptic Christians prompted 93,000 of them to leave the country in 2011 alone.

Meantime, Arab Christians in Israel are not only safe to practice their religion but, as one top government official told me, they are believed to have an even higher standard of living than the average Jewish Israeli.

Channeling Netanyahu (something not easy for me to do) I could understand how the Presbyterian decision could seem biased, hypocritical and, yes, anti-Semitic. Why should Israel be singled out for its treatment of the Palestinians when Christians elsewhere in the region are fleeing for their lives? At the very least, shouldn’t Syria and Iraq and Egypt be boycotted, too?

In his own clumsy way, Netanyahu pinpointed why the Presbyterian vote is, indeed, unfair and hypocritical. Put aside for a moment whether such divestment is even effective — selling shares in a few companies is hardly going to hobble Israel’s steady economic growth or deter future global investment, so this sort of financial pressure is unlikely to stop the occupation.

But divestment is not only about wielding punishment; it’s about shaping a moral conversation. Some of us feel as good about withholding our dollars as we do about spending them. The Presbyterians stressed that the vote was a statement about the occupation, not about Israel’s right to exist or, heaven forfend, their love of their Jewish brothers and sisters.

Ah, but it is. Because when they singled out only Israel’s actions, troubling though they may be, at a time when the region is aflame with tribal violence, they did hold one nation to a standard that others are not obliged or expected to meet. How is that not unfair and hypocritical? How does that not undermine Israel’s legitimacy?

As for their love for me and my Jewish brethren, it may be sincere but it’s awfully misguided. You’ll not usually find me in the Netanyahu amen corner, nor am I prone to identify anti-Semitism at every turn. But when Jewish treatment of Palestinians is judged worse than the way any other dominant group treats a minority, when it is deemed worthy of unique sanction, when other horrors around the world are ignored — how can I believe that this isn’t about the Jews? And that, my Presbyterian friends, is anti-Semitism.

I write this from Israel, where I am attending a journalism conference and reporting from the occupied territories. The collapse of the latest round of negotiations between Israel and the Palestinians has left a dangerous, depressing vacuum, and I appreciate the impulse to find non-violent methods to promote an end to this conflict. The Presbyterian action is probably not going to measurably hurt Israel. But it has understandably hurt Jews.