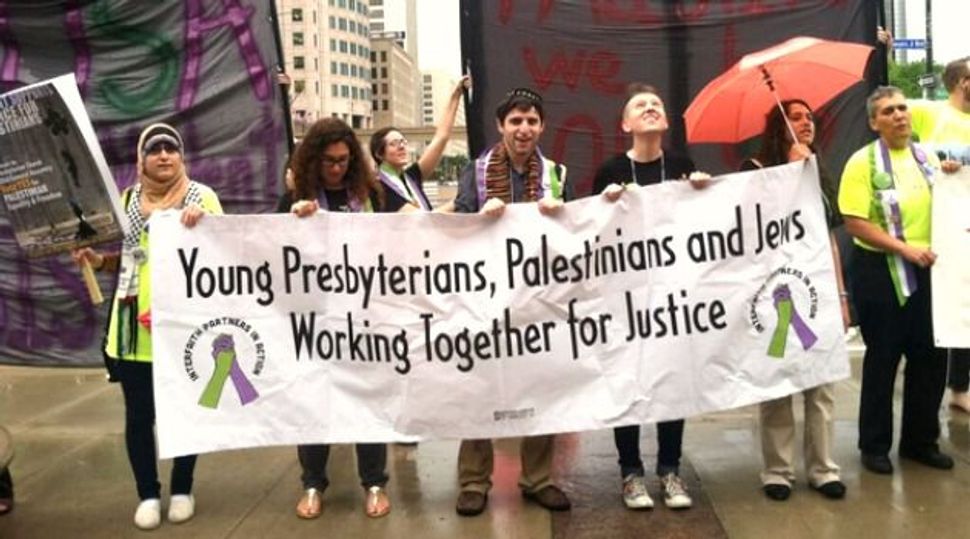 Yesterday, Jane Eisner, with whom I most often agree, wrote about the Presbyterian vote to divest from Caterpillar, Hewlett-Packard, and Motorola Solutions. These are three companies that reportedly participate in the Israeli occupation of the West Bank by providing heavy equipment for the construction of the barrier-fence, the destruction of Palestinian homes and building settlement roads. The vote passed at this year’s biennial assembly by a slim margin of 310-303.

Eisner wrote about an implied argument of Netanyahu’s in a speech he gave to a group of journalists last Tuesday night at the first Jewish Media Summit. The Prime Minister, in a “snide tone” according to Eisner, had two suggestions for the Presbyterians whom he invited for a tour of the region (Libya, Syria, Lebanon, Iraq): “One, make sure the bus is an armor-plated bus, and two, don’t say you’re Christian.”

This implied that the Presbyterian decision to divest held Israel to an unfair double standard. For Eisner that meant something very stark and very disturbing: the Presbyterian vote, by virtue of the fact that it singled out Israel while ignoring the abuses perpetrated by Israel’s neighbors, particularly against Christians, was “biased, hypocritical and, yes, anti-Semitic.”

But I’m not sure it is. Far be it from me to claim expertise in identifying anti-Semitism, but it’s worth noting that the resolution includes a line that explicitly distances the Church from “an alignment with the overall strategy of global BDS,” a movement which can at times arguably be accused of real, historically recognizable anti-Semitic tropes (I personally do not support BDS for reasons explained here, here and here). And while I’ll admit that neither this distancing nor even explicit statements of philo-Semitism are any kind of proof — one can claim to love bananas and still hate bananas — I’d like to point out a few things about the perhaps more specific argument of “double standard” that the Presbyterians purportedly uphold.

First, there’s the obvious but potentially unsatisfying clarification that the Church has a fairly long list of companies it urges divestment from for varied reasons — primarily “due to their involvement in military-related production, tobacco, or human rights violations.” The church has, at various times, divested from companies in South Africa, Burma and Sudan. Their latest push is for divestment from fossil fuels. This means that, on some level, the Presbyterians aren’t taking aim at Israel alone, nor (at least through this bill) at Israel proper. They’re pointing their nonviolent weapons at occupation-enablers, cancer-spreaders and munitions-makers — perhaps even some of those that enable the continuation of the sickening violence in, say, Syria, where, Eisner says, nearly half a million Christians have fled since the crisis began in 2011.

Second, it seems to me that to focus on the vastly more repressive countries around Israel is to miss the point of this kind of symbolic divestment. As Eisner notes, this vote was not aimed at putting any real kind of dent in the Israeli economy — pulling $21 million just doesn’t get that far. The move is far more about ethics, publicity and awareness than it is a punch to the Zionist purse. The body responsible for implementing “socially responsible” policies has a name that belies this: it’s called the Mission Responsibility Through Investment; its website describes how “the Lordship of Jesus Christ is at the heart of what we do…direct[ing] all aspects of our lives including how we earn, use, and invest our money.” For them, divesting from the occupation — in the very region Jesus walked — is what Jesus would do.

More to the point, a Church boycott of Assad would not only have been financially ineffective, it would have had no impact on the discourse. It’s not that Assad shouldn’t be “obliged” and “expected” to meet the same humanitarian standards as Israel, its that no one needs to be convinced of his violation of those standards, and then some. The Church knows that.

Larry Derfner once put it this way: “These other states [Syria, Egypt, Saudi Arabia] are, indeed, worse criminals than Israel, [but] no popular movement is needed to convince the public and political leadership in the West that what these regimes are doing is wrong and ought to be stopped.”

Earlier in the Syrian civil war, the United States called on countries to stop buying Assad’s oil and gas; the EU considered sanctions. Governments were getting involved, and that involvement had the potential for real financial, and therefore presumably political, effect. Should the Presbyterians have thrown their divestment hat into that ring, it would have been ineffectual at best, and dangerous at worst. President Obama isn’t talking, laughing, and matching strides with a despicable despot like Assad, and for good reason. But he is with Benjamin Netanyahu. And considering Congress’s relationship to these leaders — for Assad, a series of air strikes; for Netanyahu, between twenty-nine and thirty standing ovations — the Church saw a space in the American political conversation where they could have impact, draw attention to injustice, and they went for it.

Which brings me to my last argument against the double-standard claim — an argument articulated by Peter Beinart last year when the American Studies Association voted to boycott Israel. He wrote then that all political protest constitutes a double standard — and that’s okay. Boycotting Israel and not China is arguably akin to Jewish groups in the 1970s demonstrating for Soviet Jews, and not for, say, a free Tibet. He asks, “Were [the Jewish groups’] actions illegitimate because they weren’t also protesting Idi Amin and Pol Pot, who were at the time committing far worse crimes?” He goes on to remind us of a more recent protest:

In 2010, dozens of cities, performers and professional groups boycotted Arizona because of its draconian immigration law. Were their actions immoral because they didn’t first boycott Zimbabwe? In the mid-1990s, the United States waged humanitarian war in Bosnia and did nothing in Rwanda, where the slaughter was worse. At the time, United Nations Secretary General Boutros Boutros-Ghali suggested that this constituted a double standard, perhaps even a racial one, and he was right. But I’m still glad America stopped genocide somewhere.

His conclusion is that “people are morally inconsistent” and that “the roots of this inconsistency may be irrational, even disturbing, but it doesn’t mean they shouldn’t act against the abuses they care about most.”

Whether we like it or not, Israel is becoming an increasingly domestic issue for a much larger constituency than just American Jews. Israel is a biblical issue, a contemporary issue, and as groups like Christians United for Israel join the mainstream “pro-Israel” American crowd, pushing for ever-more hawkish legislation, mainline churches are going to push back. Jews — from J Street and Jane Eisner to Rick Jacobs, the ADL and the Wiesenthal Center — have every right to oppose Presbyterian divestment, and they should certainly call out anti-Semitism when it rears its head. But I don’t think that’s what this vote was about.