The Murkiness of the Hobby Lobby Ruling 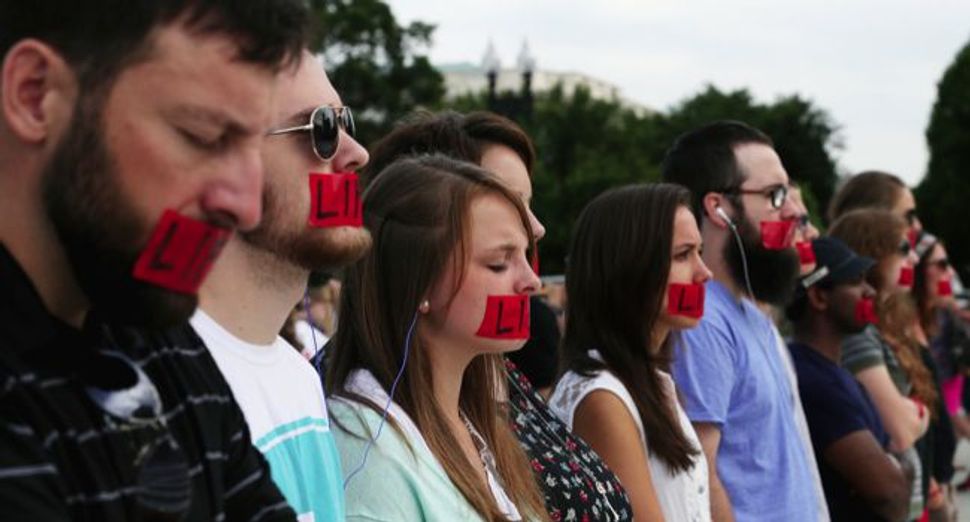 Life Decision: Pro-life protesters stand with red tape over their mouths in front of the U.S. Supreme Court in anticipation of the Hobby Lobby decision. Image by Getty Images

On one level, the case pitted the religious liberty of for-profit corporations against the demands of women’s health, pulling the Court into a high-stakes debate over how to reconcile these two concerns of the highest order. And, if not enough, the case also implicated the growing debate over how to navigate conflicts between religious beliefs and same-sex marriage. Should for-profit companies be able to refuse services — such as wedding cakes or professional photography — to same-sex couples on the grounds that doing so violated their religious consciences? Such cases had already come up in Colorado and New Mexico respectively, raising significant worries about how such cases will be resolved going forward.

In principle, RFRA was intended to address these types of conflicts. When Congress passed RFRA, they extended the scope of protection afforded to religious liberty claims beyond those required by the First Amendment. And to do that, RFRA established the following rule: a federal law was not allowed to “substantially burden” the exercise of religion unless the law was the “least restrictive means” to advance a “compelling government interest.” Translated into everyday language, RFRA prohibits laws from imposing significantly on religious practice unless the law is necessary to achieve something really important.

But evaluating the plaintiffs’ claims required the Supreme Court to answer a number of big-ticket legal issues. First, can for-profit companies “exercise religion”? RFRA, by its terms, only protected “persons”; should for-profit corporations be considered persons? Second, did the contraception mandate “substantially burden” the exercise of religion? The companies were only required to purchase health insurance that covered contraception; the decision to actually purchase and use the contraceptives were the decision of the individual employees. Should we view the decision of the employees as a substantial burden on the employers? Third, were there alternative methods for the government to ensure female employees had access to contraception or was the contraception mandate really the only option? In principle, the government could itself subsidize the purchase of contraception; but is that alternative enough to render a bill invalid? And finally, is ensuring access to contraception — with all its attendant benefits for women’s health — enough to constitute a compelling interest? How important an interest is important enough under RFRA?

The nature and scope of these questions opened the door for the Supreme Court to issue a broadly worded decision with far-reaching implications. But instead, the Supreme Court issued a far more modest decision, leaving significant uncertainty for how future cases implicating RFRA might be decided.

First, the Supreme Court held that only closely-held corporations are protected by RFRA. Were a case to implicate publicly traded companies, the Court provides little guidance on whether the same protections of religious liberty would apply.

Second, while the Court’s majority was clear that it believed the contraception mandate imposed a substantial burden on the plaintiffs, it was far more equivocal on how to determine whether a law can be upheld for being necessary to achieve a compelling interest. The Court’s majority opinion equivocated as to whether the interests at stake in the case were sufficiently important, deciding instead that it would treat the concerns as sufficient for the sake of argument. Working in the background was the fact that millions of other corporations were given exemptions from the mandate — for example, corporations with fewer than 50 employees and corporations with grandfathered status under the Affordable Care Act — undermining the Court’s confidence that the interests at stake were viewed by the government as “compelling.” On this logic, if a concern is truly that important, you don’t grant millions of exceptions.

Third, the Court identified an alternative way for the government to protect access to contraception, which was specific to the particular facts of the case. Under a system already developed for non-profit religious organizations, a company can certify to their insurance provider that they are, in fact, a “religious institution.” In these cases, the Affordable Care Act instructs the insurance company to pay for the contraceptives on its own without imposing any costs on the employer; importantly, insurance companies are willing to do so at their own cost because providing contraceptives actually lowers their costs over the long-term. Given this factual background, the Court concluded that religiously motivated for-profit companies could be given the same opportunity. In this way, the Court held that there was a way to accommodate for-profit companies without imposing any costs on third parties. And the availability of this option meant that there was another way for the government to accomplish its objectives, making the requirement that for-profit companies pay for insurance coverage that included contraceptive unnecessary and, in turn, invalid under RFRA.

Contrary to some of the more extreme reactions to today’s decision, the factual limitations on the Hobby Lobby decision limit its impact going forward. We may now know that some corporations are provided religious liberty protections, but we do not know which ones. We may have an inkling that providing contraceptive coverage is a compelling interest, but we do not know what else might qualify. And we know that in this case there was a way to provide religious liberty to for-profit corporations without imposing significant burdens on others; but that is unlikely to be the case in many other circumstances. And so what will happen if RFRA would be applied to a case of, say, a for-profit company refusing services to a same-sex couple? The real answer is we do not know much more than we did before the Supreme Court issued its decision.

The Murkiness of the Hobby Lobby Ruling