A Kidnapping That Made Israel Into One Family 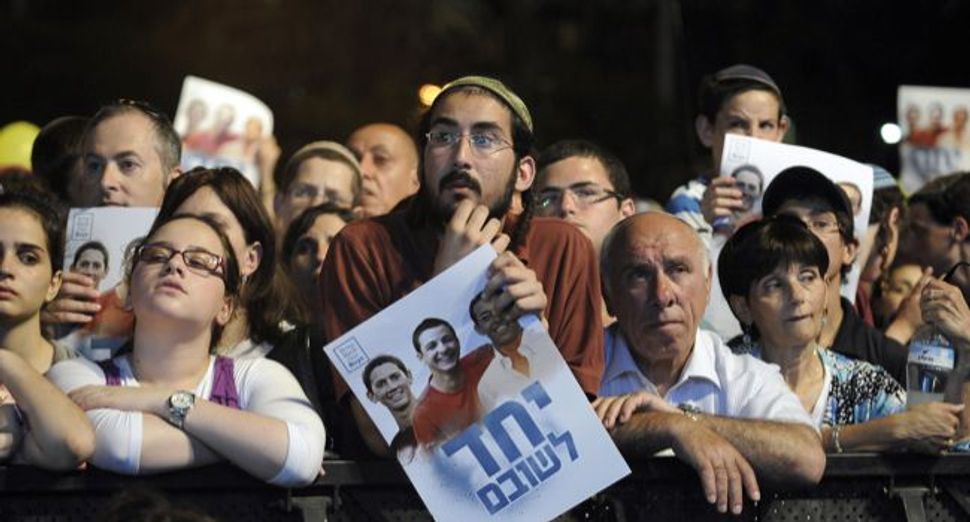 Before Hope Was Lost: A rally in Tel Aviv for the kidnapped boys on June 29, a night before their bodies were discovered. Image by Getty Images

With news that the bodies of the three kidnapped boys — Eyal Yifrach, 19, Gilad Shaar, 16, and Naftali Fraenkel, 16 — were found near Hebron, a collective sigh of grief has been released throughout Israel. It is one of these moments that brings both tragedy and closure — the former, which Israel already has in excess, and the latter which is far more elusive.

It also brings a certain degree of vindication at the end of a 17-day period of aching unknown and seemingly endless scenarios, one worse than the other. But while these events have exacerbated tensions and added anxiety-filled narratives to a country overflowing with conflict, they also highlight some of the most important and inspiring aspects of life in Israel at a time when we can all use some sources for optimism, and reminds Israel of some important lessons as we go forward.

These past two and a half weeks since the three boys disappeared on their way home, after one of them called police to say, “We have been kidnapped,” Israelis everywhere have been walking on eggshells. Even as Israelis continued life almost as normal, concern for the boys dominated the public consciousness everywhere. Prayer vigils united even those not prone to praying; bar mitzvahs and weddings included mentions of the boys; meetings and conversations on mundane and non-mundane agendas incorporated updates and exchanges about the search. This collective anguish in some ways epitomizes life in Israel. There is this constant sense of family connection, sometimes to the extreme, but always genuine in its care for victims whose crime is being a Jew.

This kidnapping, coming so shortly after the release of Gilad Shalit, also brought out a particular kind of panic. The thought that we were going to be subjected to another indefinite period of waiting, in which the threat of long-term kidnappings hangs over the heads of Israelis, inducing unbearable guilt and tortuous uncertainty, was at times too much to bear. The sight of the mothers going to the United Nations to plead for their release — a scene that is especially sad in retrospect now that we know the boys were already gone — was both empowering and frightening. The mothers, especially Rachel Fraenkel, demonstrated remarkable poise and strength, but also revived images of Noam Shalit traveling the world to release his son, hinting that Israel may once again be in it for the long haul. I think it’s in some ways easier to deal with the certainty of death than with that kind of indefinite unknowing. Thoughts of Ron Arad, whose fate so many decades later is still unknown, hang over Israel’s head like a flock of vultures. The enormous emotional and spiritual toll that these stories take on Israel is in some ways what makes Israel who we are.

I think this is why Israel was so quick to strike back at Hamas, to isolate Hebron, and to take as many prisoners as the top brass felt necessary. There was this sense that we must preempt that scenario no matter what. I think that this is also why most Israelis fully supported the actions of the Israel Defense Forces, even when some of these actions seemed unexplainable.

There were quiet corners of question, asked in ways that would not disturb the search. Why arrest so many Palestinians, some whispered? What about the toll on Palestinian lives, others dared say, but not too loudly? Is all this really necessary? With all those challenges, it seems clear now that had it not been for that no-holds-barred approach, the IDF may have never actually found the bodies. Despite doubts some people may have had along the way, right now the IDF is having a moment of proud if despondent vindication, an unspoken posture that they did precisely the job that they set out to do.

And then there were the conspiracy theories. Several different Facebook feeds gently explored the strange possibility that this was all a façade, the work of the Mossad, an excuse for the IDF to go into Hebron and root out the Hamas infrastructure. That no reliable group came forward to take responsibility or demand ransom added troubling fodder to the theories. That today’s New York Times quoted Palestinians as widely believing those theories did not help either.

Still, in other conversations both online and in person, it seemed clear that most Arabs do not favor kidnapping. Some Arabs — MK Haneen Zoabi notwithstanding – came forward to bravely show solidarity with the three boys and their families. Personally, I would really like to believe that many more were silently in this camp. It meshes with encounters I have recently had with Arab women. And besides, the alternative is too hard for me to live with.

Ultimately, this is a very, very sad day in Israel — especially for the families, but also for all those who prayed and spoke out in allegiance with the victims. But in some ways it is a reminder of what Israel is really made of. When a Jew is in danger because of his or her Jewishness, the entire country feels for the victim. Israel’s willingness to go on a mission to save the victim still resonates very strongly.

Now, our challenge is how to retain that feeling of unwavering protection for Jews while maintaining a stalwart and uncompromised commitment to the humanity of everyone else.

A Kidnapping That Made Israel Into One Family