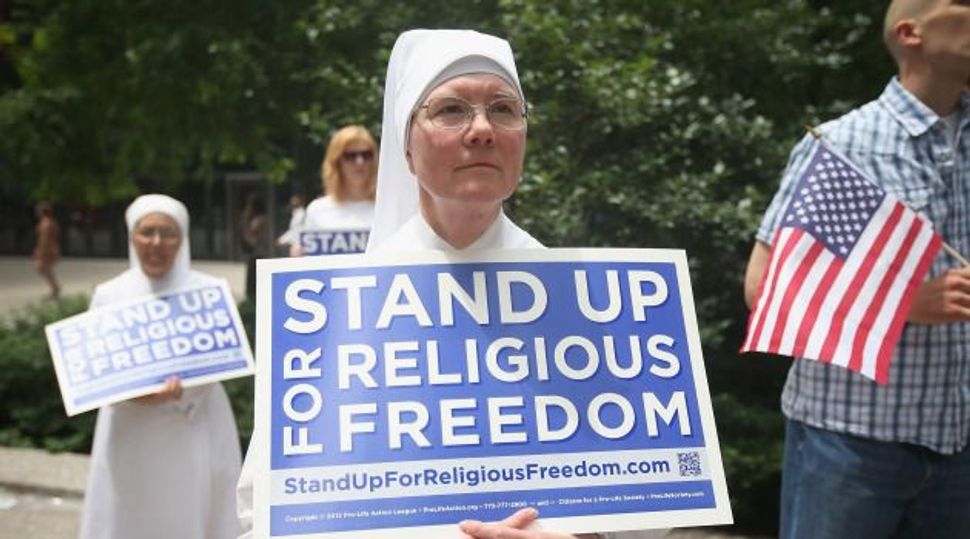 Among the joys of late June, along with fine weather and happy children, is the annual opportunity to watch the Supreme Court close out its docket with a rush of last-minute rulings on the year’s toughest cases. It’s a grand national civics lesson that brings us together as few other events can do. It teaches us what issues most unite or divide us right now and which way the wind is blowing.

Besides, it’s fun. Everyone cheers their own side and heckles the other with a passion rivaling the Superbowl. And the heckling is as instructive as the rulings themselves. Court rulings tell us what ails the republic. The cheers tell us whether we care.

Based on the public passions aroused by the decisions, here’s what we care about: reproduction and President Obama.

Here’s what we don’t care about: unions.

The two decisions issued on the second-to-last day were both unanimous, a fact that holds some fascinating lessons of its own. More on that later.

The next involved Obama’s recess appointments to the National Labor Relations Board. Like thousands of recess appointments over the centuries, these were intended to get around the Senate’s refusal to confirm presidential nominees the usual way, by voting. However, unlike most stalled appointments, which mean more work for other employees, stalling NLRB appointments left the board without a quorum and unable to enforce labor law. Which was the Republicans’ intention.

To prevent recess appointments over Christmas, the Senate held a series of phony sessions in which senators went home but pretended to be working. The justices decided unanimously that Obama’s appointments were phony because they weren’t made during a Senate recess, as the Constitution dictates, but during a phony Senate session. The Senate can make up phony stuff. Obama can’t.

The two decisions on the last day were traditional 5-to-4 splits, five conservative justices against four liberals. In reality, they weren’t too different from the previous unanimous decisions. More on that later as well.

One case involved Hobby Lobby, a corporation whose owners refuse to give their employees health insurance covering certain birth-control methods mandated under Obamacare. They believe those methods resemble abortion, which their religion forbids. The court ruling, written by Justice Samuel Alito, essentially said they’re entitled to their beliefs, and they’re entitled to pretend that their corporation shares those beliefs. Alito dismissed any comparison between the government’s “compelling interest” in guaranteeing contraception coverage, despite religious objections, and any other compelling interests that might raise religious objections, like preventing racial discrimination or collecting taxes. Those others are really compelling interests. The Obamacare thing is about, you know, abortion. That’s different.

The other closing-day decision involved union rights of home health aides in Illinois who are paid by Medicaid. In 2003, after a 20-year battle, they won the right to unionize and bargain over their wages. Since then their pay has risen from $7 an hour to $11.65, going up to $13 this December. Most accounts say it’s reduced turnover, increased job satisfaction and improved quality of care. As in many union contracts, employees don’t have to join the union — the Service Employees — but non-members must pay an “agency fee” covering the union’s cost of bargaining for them, since they get the same benefit. It’s about 1% of salary. In 2010, three home aides sued, claiming the fee violated their First Amendment rights by forcing them to support the union.

This decision was also written by Alito. He must have been up all night banging out these last two rulings, judging by his punch-drunk tone. Barely touching constitutional issues, he careened from point to point, citing past Supreme Court cases and Illinois state laws just to insist they didn’t know what they were talking about. A 1956 Supreme Court ruling permitting agency fees was dumb because the system — in practice nationwide ever since — is “impractical.” Calculating the union’s costs is too complicated. A 1977 Supreme Court case extending union rights to public employees was “an anomaly” — quoting from a 2012 ruling which (though he doesn’t mention it) he wrote — because states don’t have the “discipline” of the market keeping their labor costs down. Presumably state constitutions requiring balanced budgets don’t count as discipline.

On top of all that, the 2003 Illinois state law classifying home health aides as state employees eligible to unionize was dopey because, well, Alito doesn’t think they’re real employees. In his view they work for their patients, not the state that pays them. Besides, he implies repeatedly, it wasn’t really a law. It was an executive order issued by “Illinois’ newly elected Governor, Rod Blagojevich” — need we say more? — and then “codified” by the state legislature. For all those reasons, the court finds for the plaintiffs and strikes down the agency fee.

It’s not yet a catastrophe for unions, since it only applies to home health aides. But it sets a clear precedent for a more serious blow down the road. That’s essential to John Roberts’ strategy as chief justice, as observers have noted: Win small, piecemeal conservative victories, each building precedent for the next.

And if he can get the liberals to make it unanimous, all the better. On the abortion clinics ruling, for example, the Scalia wing was ready to end all clinic protections. By conceding the buffer zone, the liberals saved other methods of protection. Similarly, the recess appointments ruling was a compromise between liberals, who would have upheld Obama, and Scalia, who would have virtually ended the practice.

O.K. We get why reproductive rights and the presidency matter. But do we care about unions? Most of us don’t, but we should. The decline of American unions over the past generation has been a silent economic disaster. The economist Thomas Piketty and others figure union decline accounts for one-third of increased inequality. That’s probably an undercount. The curve of union decline since 1975 — from 20% to 6% of the private sector — matches the curve of middle-class income loss almost perfectly. Ditto the rise and fall of economic inequality. (For charts and graphs, see my blog at forward.com)

If you think it has nothing to do with you, you’re wrong.