How Female Circumcision Is Different From a Brit Milah 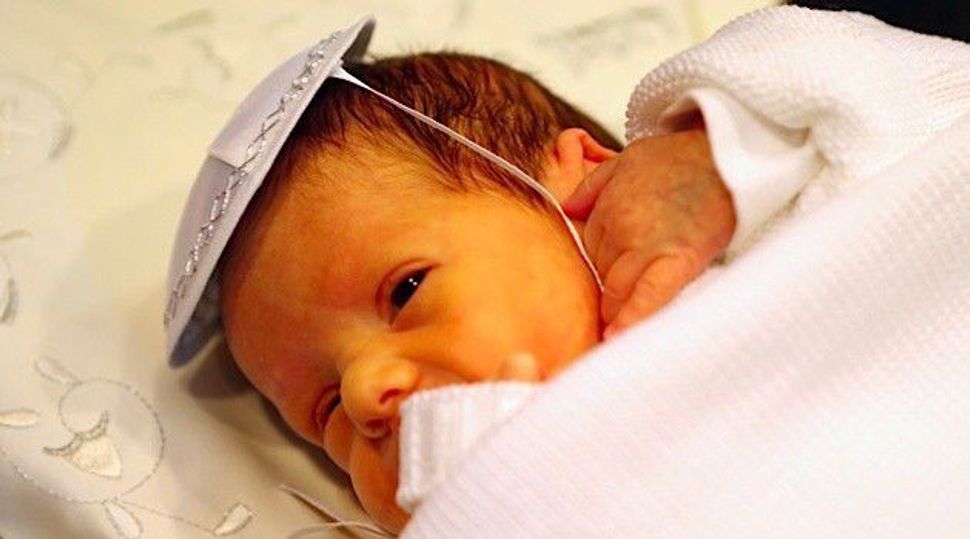 Rite of Passage: What distinguishes this cultural and religious act? Image by Getty Images

A recent story in The New York Times looked at the rise of American girls who are being sent abroad to undergo female circumcision, which has been banned in the United States since 1996.

As Julie Terkewitz reported, about 228,000 women and girls in the United States, members of an African immigrant population that has more than quadrupled in recent decades, have either undergone or are at risk of undergoing the procedure. Advocates argue that Americans are turning a blind eye to this issue, and last month U.S. House representatives Joseph Crowley and Sheila Jackson Lee delivered a letter to Congress requesting a national plan to address the issue.

Fighting against female circumcision, also known as female genital mutilation, is a no-brainer of an issue. Who could support the use of often unsterilized blades to slice off, in the least-invasive case, a portion of the clitoris, and, in the worst case, the whole clitoris and the labia, which are then sewn together, leaving just a small hole for the release of urine and menstrual fluid?

But before we Jews start fastening our anti-FGM pins to our messenger bags and sharing petition links on social media, we have to contend with the elephant in the room. You know, the one with the mohel on top.

Indeed, many fighting female genital mutilation see male circumcision in the same light, viewing both procedures as a violation of basic human rights because both are done without consent or reasonable medical justification. One columnist for the Guardian called male circumcision “a throw-back to the burnings, whippings and cuttings still practised in other tribes around the world.”

So can Jews really oppose one and not the other while being truly honest with themselves about any potential cultural biases? I say yes.

Male circumcision is a core ritual for Jews, and one still observed by the vast majority of us, with 98% of American Jewish men having been circumcised. The Bible tells us that it is how an adult Abraham marked the covenant between him and his people and God, and it tells us that for those who forgo the ritual circumcision, “that soul shall be cut off from his people; he hath broken My covenant.”

The World Health Organization sees a big difference between the two procedures, describing female circumcision as having no health benefits and as “a violation of the human rights of girls and women. It reflects deep-rooted inequality between the sexes, and constitutes an extreme form of discrimination against women. It is nearly always carried out on minors and is a violation of the rights of children.”

Complications from female circumcision can include severe bleeding, deadly infections, loss of sensitivity and sexual pleasure, pain during sex and difficulty during childbirth. There are no known health benefits whatsoever.

The WHO casts male circumcision in a very different light, describing it as “one of the oldest and most common surgical procedures worldwide, and is undertaken for many reasons: religious, cultural, social and medical. There is conclusive evidence from observational data and three randomized controlled trials that circumcised men have a significantly lower risk of becoming infected with the human immunodeficiency virus (HIV).”

Both female and male circumcision are motivated by custom: the surreptitiously stubborn notion of “This is what we do.” But the cultural setting accommodating the customs, as well as the physical ramifications of the procedures, reveal stark differences, and to ignore them is to demean the experience of the 135 million women and girls around the world who have had their genitals mutilated.

One would be hard-pressed to deny that female circumcision is bound up in incredibly patriarchal beliefs about female purity; lessening or fully terminating a woman’s sexuality is a way to guarantee her virginity before marriage and her fidelity afterward. This takes place in societies where women lack education, are largely dependent on men for survival and therefore have very little voice of their own.

Male circumcision, on the other hand, is by no means representative of men’s inferior status among Jews. If anything, the motivation behind it is to strengthen their bonds to the Jewish people and ultimately reinforce their stature in our communities. The rise of the Simchat Bat, the naming ceremony for girls, came out of a desire to welcome our girls with us much fanfare as boys receive during the circumcision ritual.

How Female Circumcision Is Different From a Brit Milah