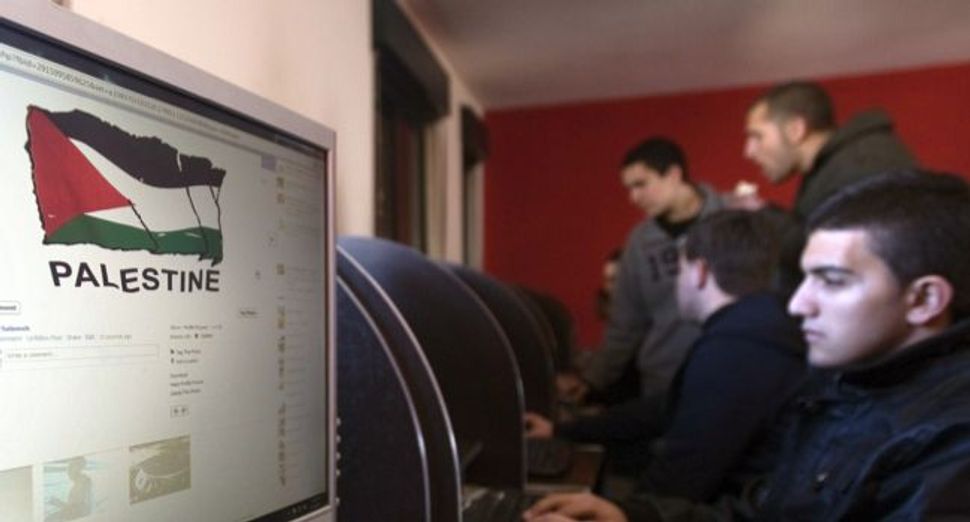 Online: Sites like Facebook will play a larger role in getting across the images and sentiments of the conflict. Image by Getty Images

We in the pro-Israel community have spent the past decade bracing for the next intifada — another uprising. And now that it seems to be upon us, we are set with our talking points: why peace talks failed, why the Hamas and Palestinian Authority unity government is to blame, how the Israelis try to protect civilian life and so on.

What we are not prepared for is seeing it all through the eyes of social media.

I am not speaking of the tweets, status updates and other editorial blurbs shared by people who have an interest in the conflict and a strong opinion about it. Those micro-blasts of opinion may test friendships and drive people from each other. But that is not a new phenomenon.

I’m speaking of the immediate first-person journalism that thrives on social media: people who capture in a video, using a simple smartphone, the actual events as they happen. In just a few days, I’ve seen a bus filled with Israeli passengers pummeled by rocks. I’ve seen Israelis rushing to a bomb shelter in Beersheba. The most upsetting part of that video is what you hear — children sobbing uncontrollably, calling out for their parents. I have seen videos taken by Palestinians of Israeli-driven cars barreling through a group of youths throwing stones, bodies flying after impact.

Much more of this is coming, and it will be deeply upsetting. When the last intifada was petering out, Facebook and Twitter didn’t exist. The iPhone didn’t exist. The ability to rapidly capture and share videos didn’t exist. Now there are millions of people walking around Israel and the Palestinian territories, all of them capable of capturing in an instant a moment of sheer terror, panic and death.

If the burst of violence we are now experiencing becomes a sustained period of revolt, there is little doubt that we will see mass-terror attacks on Israelis, captured on video, in gruesome first-person detail.

We cannot be sure how each of us will react. Seeing violence is known to have negative psychological impacts, and there is a reason that people often avoid doing so. But social media does not come with trigger warnings; you are often seeing something before you knew it was coming. And once you see something horrific, you cannot help but be deeply affected by it.

A raw, unedited and violent video is like a bloody shirt. And today there is great propagandistic power for extremists of all varieties in filming and distributing videos of their attacks. The Islamic State in Iraq and Syria, the Muslim extremist group currently carving out its own sharia state, is well known for its efforts to publicize its own violence. The group is proud of it, because this not only terrifies — it also enfeebles.

The danger is that those who stand for violent retribution will be enabled by such attacks — and that in Israel in particular, extremist nationalists will not only be unable to restrain themselves, but also will feel obliged to react. Social media is not just a way to get information, it’s a way to get courage. It comes in the form of retweets, likes and other virtual slaps on the back, sometimes only in the dozens, but often in the hundreds or thousands, from people who think just like you. Even among a small minority of like-minded people, that sense of support can unleash great things — but it can also unleash stupid things.

If the result of the social media intifada is an ever-escalating battle between people far from the conflict, sharing videos of murder, destruction and terror in Israel and the territories, we can be sure of one thing: The extremists on all sides of will dominate the debate. You can’t have a reasonable argument with a graphic and sensational video. And by virtue of dominating the debate, those extremists will also determine the course of the intifada.