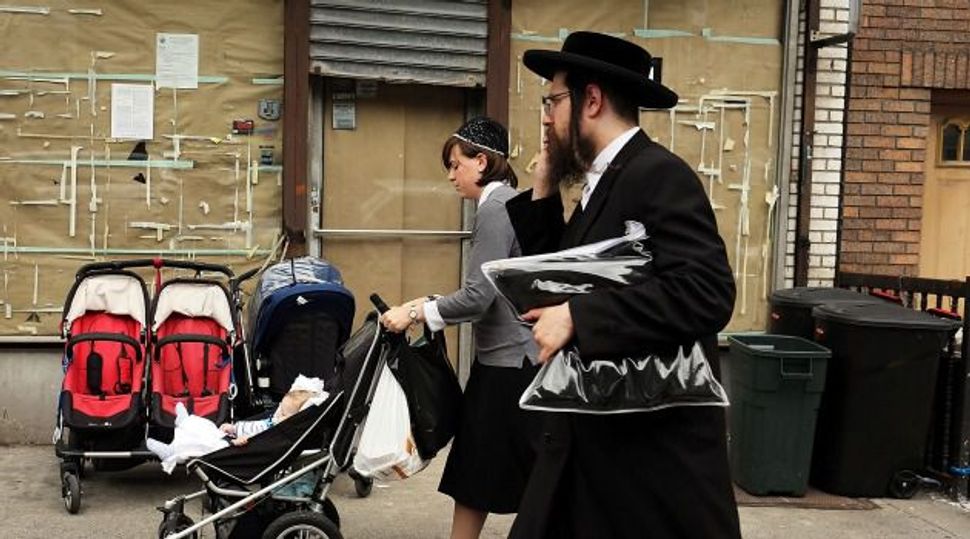 Several years ago, when I was penning a weekly column for a Haredi magazine, the periodical declined to publish one of my submissions. It was about “Cultural Orthodox Jews,” a phrase I coined for people who eat only rabbinically supervised foods, wear black hats (or wigs), pray in synagogue daily and send their kids to yeshivas — but all, and only because, that’s what everyone in their community does. Such “COJs” may or may not believe in the Creator, but if they do, they don’t give Him much thought — even while living seemingly intense Jewish lives.

The editor told me that he feared alienating his readers.

I hoped, and still hope, that that judgment was overwrought, but it confirmed at least the perceived prevalence of the sort of “Orthodox mimicry” I had sought to address, where Jewish observance is a “Fiddler on the Roof” sort of “Tradition” — miles wide, but mere millimeters deep. I published the essay elsewhere, and to my relief it was well received by readers, including people I greatly respect.

The OTD, or “off the derech [path],” phenomenon — erstwhile-Orthodox Jews who leave their communities and observance — receives much fanfare in many media. But the greater contemporary challenge to the Orthodox world, I think, lies in the COJ phenomenon.

It’s not a new one; the danger of observance-by-rote has been decried by Jewish religious leaders over the ages, from the ancient prophets to, in more recent times, the Mussar movement, the study and living approach that stresses ethical and God-conscious values. The movement developed in the 19th century and remains cultivated by many yeshivas and seminaries today. But the formidable growth of the Orthodox community in recent decades has made the problem more pressing.

Rabbinic luminaries Aharon Feldman and J. David Bleich focused on this matter in the Fall 2013 issue of Dialogue, an occasional book-length Orthodox publication.

In an essay titled “Observant but Not Religious,” Rabbi Feldman, the rosh yeshiva or dean of Ner Israel Rabbinical College, in Baltimore (where I studied in the 1970s), writes that despite the “rejuvenation of Torah observance among Jews… something so utterly central to our existence as Jews continues to go wanting in the lives of many: the emotion of the heart, the focus and forethought of the mind, the commitment of the spirit.”

Rabbi Bleich, a rosh yeshiva at Yeshiva University’s Rabbi Isaac Elchanan Theological Seminary and professor of Jewish law and ethics at the Benjamin N. Cardozo School of Law, writes in a similar vein, bemoaning the “different form of Judaism” that has asserted itself, an “Orthopraxy” that is “based upon practice rather than belief.”

The Cultural Orthodox Jew phenomenon goes a long way toward explaining how an ostensible Orthodox Jew can engage in unethical business practices, cheat, steal or abuse others. Or, more mundanely, how he can cut off others in traffic, act rudely or blog maliciously. Or, for that matter, how he can address his Creator in prayer with words so garbled and hurried that were he speaking to another mortal, the speed of his speech would elicit laughter.

Now, of course, all Jews who endeavor to be observant lapse at times into rote behavior. We don’t always concentrate on what we’re saying when we pray or recite a blessing, nor do we always weigh our actions and interactions on the carefully calibrated scales of Jewish propriety. But we don’t live our daily lives oblivious to the Jewish ideal; we know when we’ve lapsed, and endeavor to be better. COJs seem not to care.

I recently counseled a young woman who thought I might be able to help her off the horns of a dilemma. Raised nonobservant, she has spent several years exploring Judaism, and wants desperately to embrace observance. But she is an honest and heartfelt person, and she finds one realm of observance (which one it is isn’t pertinent here) to be very daunting.

Hearing the woman out, I realized that she really needed to speak with someone who had faced the same obstacle to observance that she was facing and had overcome it. (I didn’t fit that bill.) And I told her so.

I added something, though: that listening to her had reminded me of the “Cultural Orthodox Jew” phenomenon. She, I explained, represented its polar opposite. Whereas a Cultural Orthodox Jew finds it fairly easy to live “observantly” but is largely oblivious to his relationship with the Divine, my counselee was keenly, painfully aware of the Creator but was, as a result of her upbringing, finding it hard to undertake a realm of observance she realized was Jewishly required of her.

I wished her well, and I hope that she finds the right person to speak with and overcomes her personal challenge. But one thing I know is that, despite her current nonobservant lifestyle, she is, on the spiritual scale, light years beyond those who go through the motions of observance but without ever giving much thought to what they’re doing.