When Reb Zalman Hummed ‘Home on the Range’ 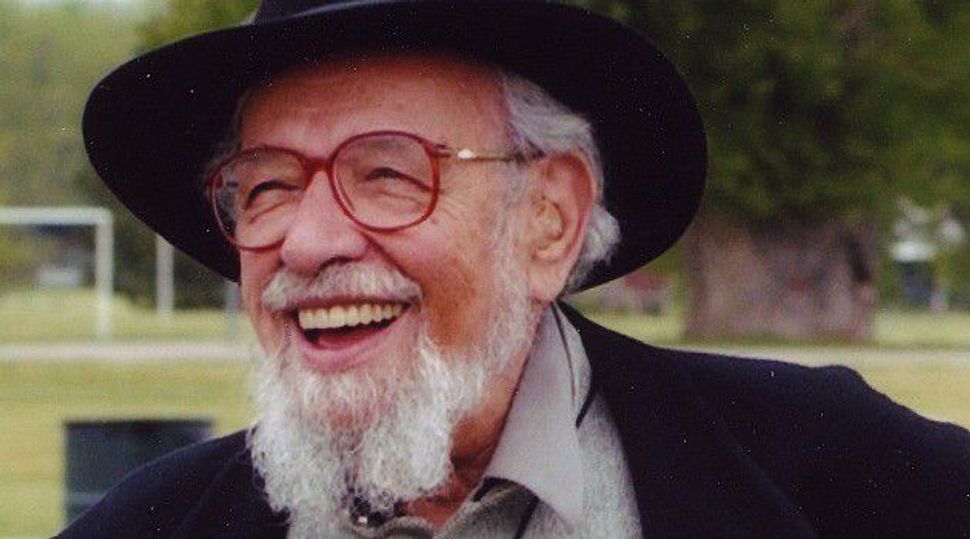 I first met Zalman Schachter (not yet-Shalomi) in 1971 in Warwick, N.Y., at Kutz, a Reform Jewish camp where my wife, Elana, and I spent our first married summer as teachers and counselors. Our friend, newly ordained rabbi, Larry Kushner, had hired me along with a few other rabbinical students to work with him and his new colleague, mentor and senior rabbi in Chicago, Arnold Jacob Wolf, to staff a concluding arts program that lasted a week or two, and that culminated in a memorable visit with Zalman for the final Shabbat.

The last days of the program unfolded like this: preparation for Zalman, arrival of Zalman, being transformed by Zalman, processing Zalman. Forty-three years later, I am still processing.

His sheer physical presence, generous smile, radiating eyes, soothing melodious voice laughing, speaking, singing, his subtly accented speech that tended to voice ‘d,’ for ‘th’ reminding you that he had been uprooted and nearly killed by the Nazis, his vocabulary, hip, multilingual, contemporary, his beret, glasses, and cigarettes.

On Friday afternoon at the final pre-Shabbat workshop Zalman addressed 100 campers. He evoked God as a lonely audience of one, a lovesick atheist, awaiting our performance of lovesongs, and he told the tale of the Infinite who had reduced himself to an infinitesimal point in order to make space for Creation, and how Creation, the bride, had become estranged from her Lover. On Shabbat, he explained, they reunite. Session complete, I was stunned to see the hall full of teenagers quietly weeping. Then, at his request, I led Zalman to a phone (cell phones did not yet exist.) and stood there as this magician who seemed to speak with angels now smoked a cigarette and discussed an insurance claim with his agent. Startled by the unexpected juxtaposition of the celestial with the diurnal, I thought, for the first time consciously, one may live outside of the world and yet return to live within it.

And then Shabbat. Zalman dressed in full regalia, streimel, kapote, gartel looking strange sounding familiar, leading kiddush to the tune of “Home on the Range,” guiding us through a silent meal in which we fed each other.

I invited Zalman to visit Hebrew Union College, Cincinnati, the Reform Rabbinical school where I studied. When he arrived to spend a pre-Shabbat with us I was so nervous driving him from the airport that he urged me to calm down. As he strolls through the new library stopping to gaze at an exhibit, he gently backs into a concrete column.

I think, this was not a performance; Zalman lives attentively within a fully animate universe. Soon the communal mikva inside the pool in the gym, but first the dovenning workshop in the weight room in front of mirrors, before which we shout, cry, moan our primal MOMMY-DADDY-GOD! MOMMY-DADDY-GOD! and our Sh’ma Yisrael. Friday morning the rigid pews and stark pulpit of the HUC Chapel are transfigured as Zalman leads us in Shacharit, morning prayers, singing the words of the Union Prayerbook, 1945 edition, words I had heard from my earliest years portentously intoned from on high, now sung communally to the accessible melodies of Dylan, Beatles, Donovan, Stones. The English words “Grant us peace, thy most precious gift, O Thou, Eternal Source of Peace, and enable Israel to be its messenger in the world…” and the Hebrew words, Sim Shalom, danced, as did we, the dovveners. The ecstasy of unvarnished prayer inside the frame of the familiar when the heart is alive to place and moment.

The overflowing generosity of the man. Elana and I begin to receive via the (land) mail large packages from Zalman, manuals for prayer and meditation, his translation of Birkat HaMazon and of the Yiddish poems of Abraham Joshua Heschel, his kabbalistic map of the phases of Shabbat, his bibliographies of spiritual writers, and tape cassettes on which he sang and explained Hassidic nigunim, melodies, and on and on. When we tell him that we are planning a roadtrip west in Summer, 1972, he offers to be our travel guide. So as his guest, we visit a spiritual commune, the Lama Foundation in Taos, New Mexico where we meet a young Jew who, under Zalman’s tutelage, had taken a vow of silence and adopted the name “Tsim,” a contraction of ‘tsimtsum,’ the term used by kabbalists to refer to God’s self-contraction, his stepping back in order to make space for Creation. Tsim wore brown robes and walked about with a slate board and a piece of chalk so that he could communicate. As Elana conversed with him, he never needed to scrawl a full response; she always spoke it for him.

If you want to understand holy space, and hear the force of Gregorian chant, consider doing a retreat at Gethsemane, the abbey where Thomas Merton lived, Zalman had suggested to me. So one Friday I drove from Cincinnati into the woods south of Louisville, Kentucky, for a weekend with the monks. Zalman had arranged for me to meet Merton’s mashpiya ruchani, his spiritual advisor, Father Augustine, a congenial, chemist, whose colorful dream-like paintings hung high in his laboratory. In discussing Zalman’s generative energy, he said, “Chesterton would have called him, ‘Manalive.’” As the busy monks’ chanting resonated against the vaulted heights of the chapel, I felt like I was at a kibbutz of the spirit where the rule of silence enabled people of radically different backgrounds to work and serve together.

Elana and I did not join B’nai Or, Zalman’s spiritual community. Rather in 1973 we moved to Israel and eventually became students there of Rabbi David Hartman. My intellectual focus became Talmud, Maimonides, Soloveitchik. My existential task was to become an Israeli. Hartman taught us to think of Israel as a return of the Jewish people to full worldly responsibility. But Zalman never left our hearts or our lives even through seasons of intervening distance.

After eight years in Israel, we returned to the U.S., where as Jewish chaplain at Yale, I got to invite Zalman to inaugurate the “Common Quest Fellowship,” which was created in the wake of the Dalai Lama’s 1991 visit to the Yale campus. During his visit we tasted the expanding concentricities of Zalman’s evolving genius. Sitting with students in Dwight Chapel, he discoursed on freedom. “Look at me. You think I am just sitting here. But you’re wrong. My toes are dancing. You can always dance, even if it is only your tongue tapping against your teeth.” Again years pass and in 2007 we travel to Brattleboro, Vermont to hear Zalman address the Assisi Institute on “Kabbala, Myth and Archetype.” After a voluptuous talk during which he introduced his wife, Eve, as his “external memory hard drive,” and conducted a ten minute intermission to sing and dance “the Hokey Pokey,” we went up to him on stage as young disciples crowded about him seeking his blessing. I approach and say, “Hi, Zalman. It’s Jim and Elana Ponet.” He smiles, gazes, and says, “Ahh, you still love each other.”

Back at Camp Kutz, 1971, it was late summer, well past Tish B’Av, the torah readings were from mid-Deuteronomy. In a Shabbat derasha, sermon, Zalman urged us to think about the link between parshat ki tetze, “When you go out to war” and the parsha that follows, ki tavo, “When you come into the land.” Ki tezte ends with an evocation of Amalek which can be understood as a summons to eternal hatred of the enemies of the Jewish people. “Remember what Amalek did to you on your way out of Egypt, how he attacked the weak and weary when you were exhausted and feckless. When God gives you rest from all your enemies in the land he gives you to inherit, wipe out the memory of Amalek. Do not forget.” Do not forget to erase Amalek’s memory? Or do not forget Amalek even as you erase his name from history? Or is it possible that the way really to remember the barbarous past is to forget?

Against that backdrop, I hear Zalman singing from Song of Songs, oi bati lgani achoti chala, areetee moree…. “I have come to my garden, my sister, my bride, I have poured my myrrh, with my honey….kol dodi dofek, pitchi li, “the voice of my beloved knocks, open to me,” and then from Psalm 118, pitchu li shaarei tsedek avo bam odeh ya, “Open to me the gates of just love, I will enter and thank God.”

Zalman, you have entered and showed us the way.

When Reb Zalman Hummed ‘Home on the Range’