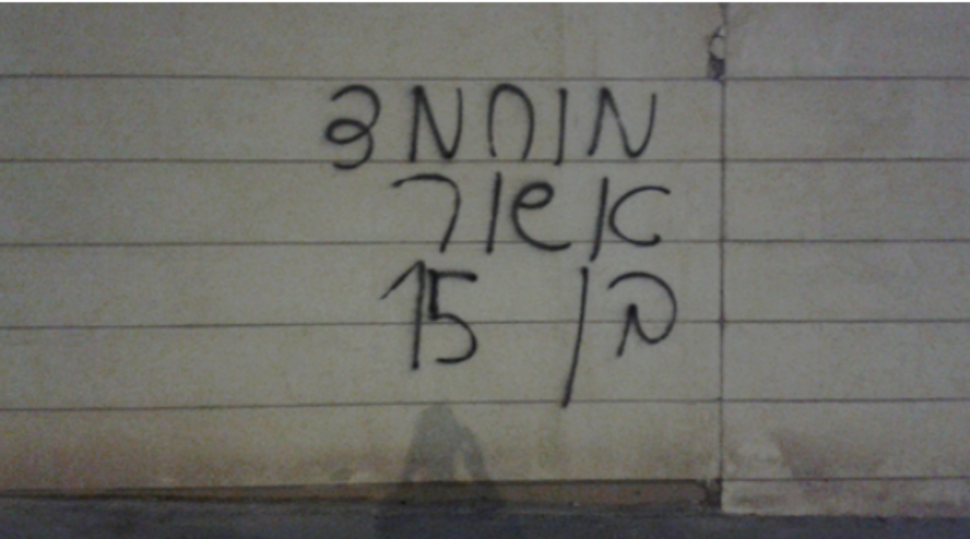 Image by courtesy of namesonwall.tumblr

We read names. We say names out loud, and hold their souls on our breath. We record names with ink and carve them into stone; we raise them in national squares and on city streets.

Someone in Israel has taken it upon themselves to perform this sacred duty for people very recently dead, not in stone or ink, but spray paint; the letters are Hebrew, but the names are not.

Dunya Mahdi Hamad, who was 16 when she was killed on Tuesday, July 8. Elsewhere her name has been spelled Dunia Mehdi Hamad, or Denil. There’s also Mohammed Ayman Ashour, aged 15. Mohammed Khalaf al-Nawasra, aged 4. Hana Malakiyeh, aged 27, and her son, Mohammed Malakiyeh, one and a half years old at the time of his death.

There are more names, and they are scrawled on the walls of the southern Israeli city of Beersheva, a place that has seen its own residents scurrying for bomb shelters, and picking through the remains of shattered homes. Beersheva is not safe from this war, and neither are Israel’s citizens. Dror Hanin was 37 years old when he was killed by flying shrapnel on Tuesday; his wife and children are left to mourn, just as surely as are the families of Gaza’s dead.

Yet whoever is roaming Beersheva’s streets with a can of black paint knows that even as Israel’s Jews will remember Hanin’s name, most will try never to know the names of the over 200 Palestinians killed so far in Israel’s most recent attack on the Gaza Strip. Just as we tried to never know their names in 2012. And 2008/2009. And 2006. And every other time in between.

Some of those killed in Gaza were actively involved in trying to kill Israelis when they died; a great many of them were not. Surely Mohammed Khalaf al-Nawasra was not. Surely Mohammed Malakiyeh was not. In forcing these names before the eyes of Israeli Jews, the Beersheva graffiti artist is making a very simple statement: They were human. They must be mourned.

I wonder if names will continue to blossom on Beersheva’s walls, or the walls of other cities. There are so many left to write. Maybe someone will pick up a can of Tambour Black #465-450, the kind that withstands the heat, and spray the names and ages of Ahed Atef Bakr, aged 10; Zakaria Ahed Bakr, aged 10; Mohamed Ramez Bakr, aged 11; and Ismael Mohamed Bakr, aged 9.

They were cousins, and they were apparently playing soccer when Israeli ordnance rained down on their heads.

May their memories be for a blessing.