France Must Reckon With Its Anti-Semitism Problem 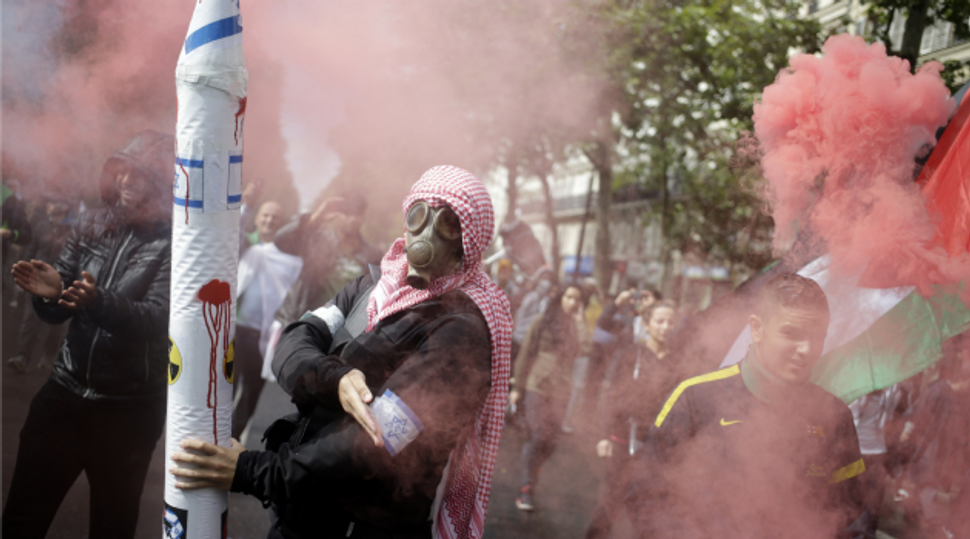 When a crowd of people took the Bastille, the hulking prison in eastern Paris symbolizing the power of the monarchy, on July 14, 1789, they launched the French Revolution. This explains why popular demonstrations on behalf of the revolutionary ideals of 1789 — liberty, equality and fraternity — most often conclude at the towering column on the site where the prison had formerly stood.

On the eve of this year’s Bastille Day, the neighborhood hosted a different kind of siege. Was it a re-enactment of the taking of the prison? Or was there a holiday sale at a local department store? Unhappily, it was neither; instead, a crowd stormed the Synagogue Don Isaac Abravanel on the Rue de la Roquette. Rather than framing the flare of fireworks and the singing of “La Marseillaise,” Paris became the stage for clouds of tear gas and for the chanting of “Death to the Jews.”

Let us forgive those observers who assumed that, rather than attending the celebration of the universal values of 1789, they had witnessed the commemoration of their demise.

The confrontation outside the synagogue was, depending on one’s perspective, either the logical climax or a lamentable sideshow to a protest march that had begun at nearby Place de la République a few hours earlier. According to police estimates, the demonstration numbered about 7,000 participants — many were young women with head veils. They had taken to the gray and damp streets to announce their solidarity with the Palestinians of Gaza, as well as to denounce Israel’s military strikes. Walking behind a lead banner that declared “Full Support for the Struggle of the Palestinians,” the demonstrators were peaceful, if partisan. The air resonated with the choruses of “We are all Palestinians” — a tragic riff on the 1968 slogan “We are all German Jews” — as well as “Allahu Akbar” (God is great).As for chants condemning Hamas for the hundreds of rockets it had lobbed into Israel before the government finally responded, there were none. Nor, for that matter, have there been any demonstrations offering total support to the brutalized people of Syria, whose government has massacred untold thousands of children and women.

But violence, ultimately, was not wanting. When the marchers reached the Bastille, about 200 young men peeled off and surged along the narrow streets toward the Abravanel synagogue. Named after the Portuguese philosopher who tried to prevent the 1492 expulsion of Jews from Spain, the synagogue was host that same day to a special prayer service dedicated to peace in the Middle East. But instead, the war in the Middle East came to Paris. The rampaging youths, many shouting “Death to the Jews,” swarmed outside the barred gates of the synagogue. Inside, congregants and guests — numbers range from 200 to 400 — quite suddenly found themselves prisoners.

Only several hours later — a period that saw repeated confrontations between pro-Palestinian demonstrators and members of the Jewish Defense League — did the CRS (the riot police) arrive, permitting those sheltering inside the synagogue to leave.

Official denunciations of the violence were as rapid as they were predictable. During the traditional July 14 interview, President François Hollande condemned the near-riot: “One cannot make use of anti-Semitism because there’s a conflict between Israel and Palestine.” An odd phrase: Are there, after all, other and more legitimate uses of anti-Semitism? Hollande sought to clarify: “The Israeli-Palestinian conflict cannot be imported.” Prime Minister Manuel Valls echoed Hollande’s declaration: “France will never tolerate the importation onto its soil of the Israeli-Palestinian conflict.”

These sentiments are noble, but empty. This conflict was exported to France years ago: We need look no further than the 1990s and the wave of terrorist bombings in Paris, no closer than 2012 and Mohamed Merah’s reign of terror in Toulouse, to remind ourselves of this regrettable fact. Far from being a net importer of Middle East violence, France has in fact begun to balance this dreary deficit by becoming Europe’s most important exporter of Islamist violence. French officials estimate that several hundred French citizens have gone to Syria to fight alongside radical Islamic groups.

The question for France is not how to prevent the “importation” of the Middle East to its soil, but instead how to discourage that importation from taking root. The head of CRIF, the umbrella organization for Jewish institutions in France, Roger Cukierman, has demanded that the government outlaw pro-Palestinian demonstrations. Yet such efforts, as the government’s crackdown on the openly anti-Semitic comic Dieudonné last year revealed, are not only legally dubious, but also politically nearsighted. In a recent interview, the new chief rabbi, Haim Korsia, insisted that Jews still have a future in France. But such a future remains desirable only if the French Republic remains fully committed to its increasingly embattled republican ideals.

France Must Reckon With Its Anti-Semitism Problem