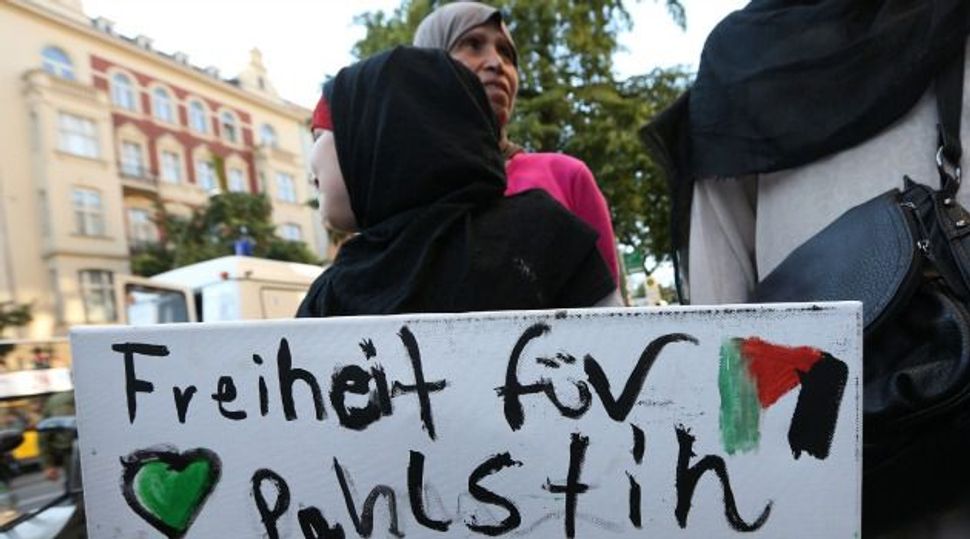 German demonstrators join Europe-wide round of protests against Israel’s attack on Gaza. Unlike other groups, Jews are blamed for the actions of Israel — and are coming under attack worldwide. Getty Images.

(Reuters) — As the death toll in Gaza rises, so does anger against Israel – and sometimes, by extension, Jews – in Europe and elsewhere.

We should mark how unique this is. There’s a very large, and often very rich, Russian community in London – and there are no attacks on Russians or their mansions, restaurants or churches because of the Russian seizure of Crimea and sponsorship of uprisings in eastern Ukraine.

People from Sri Lanka didn’t live in fear when their government was pounding the Tamil Tigers into submission, with thousands of deaths. Chinese visitors are undisturbed by reaction to their government’s suppression of dissent in Tibet and its jailing of dissidents. And quite right, too. Who knows what Russians, Sri Lankans or Chinese abroad think about their governments’ actions?

Jews, by contrast, are held responsible by large numbers of non-Jews in Western democratic countries for Israeli actions. That’s all Jews, whatever their views on the Israeli response to the rockets fired on Israel from Gaza. Sometimes, the reaction goes much further than disapproval.

Over this past weekend, a synagogue in Paris was firebombed, and there were a couple of small demonstrations featuring signs saying “Death to Jews.” The attack further inflamed tensions that were already running high since before the latest violence in Gaza. In May, four people died when a gunman opened fire in a Jewish museum in Brussels. Many of those interviewed said they were not surprised, given the rise in the level of verbal and some physical violence against Belgian Jews in the past decade.

France, home to half a million Jewish citizens, has seen rising rates of emigration to Israel, the United States and the United Kingdom. So pronounced has this become that two senior French ministers, Foreign Minister Laurent Fabius and Interior Minister Bernard Cazeneuve, authored an article contending that violence and incidents against Jews in France had been falling – and that, while recent incidents were wholly unacceptable, the fear that prompts the uprooting of families and businesses was unwarranted. Tensions, they wrote, especially emanating from immigrants and new citizens from North Africa, rose after the financial crisis of 2008 but were being actively combatted.

The French ministers are somewhat right. A Pew report based on polling showed that anti-Semitism in some countries had fallen, and that those saying that they didn’t like Jews had fallen in some cases to quite low levels – to 7 percent in the United Kingdom and – the lowest – to 5 percent in Germany (disapproval of Muslims was much higher). In France, 10 percent of respondents expressed disapproval of Jews, but in other countries the numbers were significantly higher – with crisis-ridden Greece the highest, at 47 percent, Poland at 26 percent (that number represents a sharp fall over the past five years) and Italy, which tends to pride itself on its anti-anti-Semitism, at a robust 24 percent.

But rising violence can and apparently does co-exist with a general fall in disapproval of Jews. In their article, the French ministers mention the strong growth in far right politics since the early 2000s. The far-right groups are not always anti-Semitic, however. The Dutch Freedom Party is strongly pro-Israel, and even the French Front National under Marine Le Pen has dropped most of the anti-Jewish rhetoric of her father, Jean-Marie Le Pen, her predecessor. But many of the others continue to attack Jews verbally, and a few – like the Hungarian Jobbik and the Greek Golden Dawn – are virulently anti-Semitic. They and their supporters are often behind the attacks and the vicious rhetoric, much of it on the Internet.

There’s a subtler half-life of the old prejudice still widely prevalent. David Hirsh, a sociologist at London’s Goldsmith College, writes that because nearly everyone can happily agree that Nazism was hideous and the Holocaust a horror, we miss the fact that anti-Jewish prejudice is embedded in many of the responses expressed to “capitalism and banking, nationalism, modernity and imperialism … it was comfortable for us to imagine anti-Semitism as appearing only with a silly mustache and a fascist uniform, and as being permanently discredited.” Because we tend to think in ready-made categories, Hirsh believes, we have to see Jews either as victims of pogroms or as imperialist oppressors of their neighbors. The complexities are sacrificed to a more satisfying striking of attitudes.

Yet since they are pressed into having an attitude toward Israel, politically active Jews have to navigate the rapids of events with some care. Those who do will often fall back on a defensiveness: Yes, the killings are awful, but the country is surrounded by enemies, and Hamas and other groups who wish to destroy Israel are now able to send missiles to the country’s urban centers – what would any country do? There’s truth to that. The problem, though, is in that tricky word “but.”

Because there are plenty of “buts” on the other side, too. And many Jews understand that.

In a lucid article in The Atlantic, columnist Jeffrey Goldberg discusses the “justifications” he has heard for the killing of Muhammad Abu Khdeir, a young Palestinian, allegedly by a group of Jews looking for revenge for the killing of three Jewish teenagers. He cites a piece by Rabbi David Wolpe of Los Angeles, in which the rabbi asks people to “please don’t say but. The words after ‘but’ invalidate everything that comes before. As – ‘he’s a nice person but he does steal from the company.’ See? ‘But’ is a meaning duster, sweeping all that comes before it.”

What Wolpe says can be taken as a broader lesson for the entire region. There is no “but” to justify attacks on either side.

In the long term, Israel has to find a lasting peace with the Palestinians, and its neighbors. So, too, do those on the other side. The moral lessons seem clear. Reality, of course, is more difficult, but there is no other way.

John Lloyd co-founded the Reuters Institute for the Study of Journalism at the University of Oxford, where he is Director of Journalism. The opinions expressed here are his own.