Jews, Christians and Muslims Pray and Fast for Peace 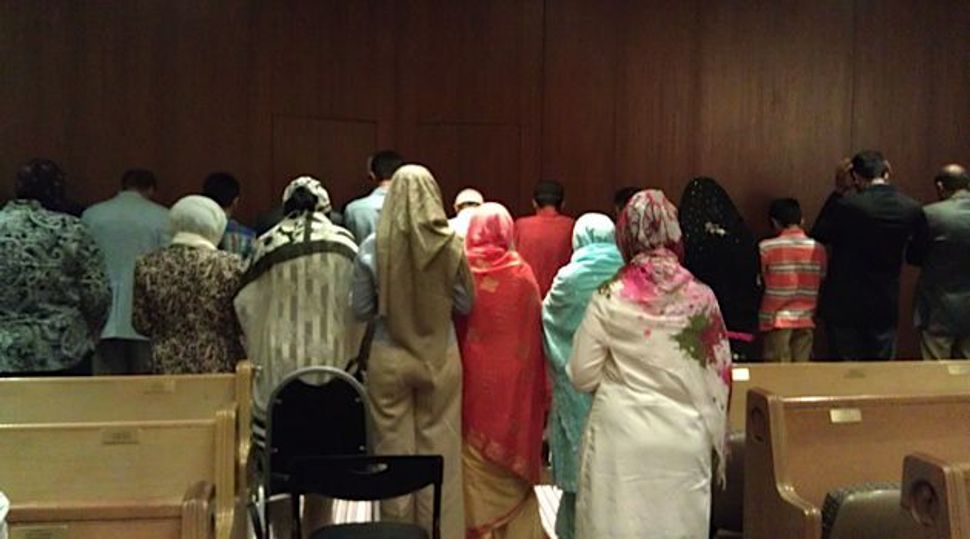 So started the evening, “Fasting together, Praying for Peace” at Temple Sinai in Roslyn, New York, this past Tuesday evening. Jews, Muslims and Christian neighbors gathered together to talk, learn, pray and break the fast together. The Jewish minor fast day of the 17th of Tammuz coincided with the eighteenth day of the fast of Ramadan. The groups came together, under the auspices of the Long Island Board of Rabbis and the Islamic Center of Long Island, partnering with the Long Island Council of Churches, the Long Island Muslim Society, the Sid Jacobson JCC and the American Muslims and Jews in Dialogue. It was a long list of those who wanted contact and the beginnings of healing.

The idea of a day of fasting together, or in the language of civil protest, “a hunger strike for peace” was first proposed by Eliaz Cohen, an Israeli poet. Cohen wrote of his aspirations for the day.

For both traditions – this is a day designated for soul-searching, an opportunity for people to take responsibility, for self repair and for self and communal purification and for repentance. This is an attempt to direct the consciousness of both peoples to this day as a peak day in which each man and woman in their home and in their communities will be invited to take part, to fast in solidarity with the suffering, violence and pain of self and others, to ask how to end the cycle of bloodshed and draw a horizon of hope and vision. Afternoon gatherings and classes will be held between the two communities – sharing stories, studying and praying together, and by the appearance of the stars the people gathered will share an “iftar” – breaking the fast with a delicious meal.

When I arrived at the program with my husband, I only recognized one other individual. And although I felt alone in certain ways, I also felt part of something much larger. Both Jews and Muslims had responded to Cohen’s call and similar groups were meeting in Israel, in Philadelphia, in Oakland, California and in Palo Alto. People met in Texas and in London and in Kuwait.

We sat together in the sanctuary of Temple Sinai, and the air was filled simultaneously with anticipation and sadness. One of the early speakers was Reverend Tom Goodhue of the Long Island Council of Churches, who had led a delegation of Protestants and Catholics to Northern Ireland twenty years ago, to encourage the peace process there.

He reminded the group that the war between those two enemies had gone on for many centuries, much longer than the decades of strife between Israel and the Palestinians. And yet, a peaceful solution was found. He offered the gift of hope, that in seemingly intractable solutions, peace sometimes prevails, without rational understanding of why. He also spoke of the comfort that some of the people in Ireland had received from knowing that there were those who believed that peace was possible. Sitting there, we hoped to convey that to our beleaguered brethren in the midst of their trauma.

Then there were teachings by Rabbi Lina Zerbarini of the Sid Jacobson JCC, and Imam Ibrahim Negm, Special Advisor to the Grand Mufti of Al-Azhar University.

What was breathtaking was the similarity of the lessons that each spiritual leader chose to share. Rabbi Zerbarini asked us to compare the Biblical verse “You should love your neighbor as yourself” with the concept in Genesis that all people are created in the Divine Image. That we are all created in the Divine Image must heighten and sanctify the way we relate to one another. The Imam spoke about the fasting as time to feed the soul. And the proper way to feed the soul and bring God into the world, according to the Quran, is by reaching out and helping others. And “others” refers not just to one’s friends, but to all humanity.

Knowing one another was facilitated in three steps. First we studied together and shared ideas. We then each prayed the evening service, in the presence of the other. Each group honored the sights and sounds of the prayers of the other. For me personally, it was the first time I had been witness to a Muslim service, other than something I had seen in the movies or on TV. It was profoundly moving, as was the Maariv service, each set of voices ascending to the realms of the holy. Finally, we broke our fasts together, with vegetarian foods brought by both groups.

It was surreal sitting in the prayer meeting. As I looked around, I realized what little contact I generally have with the Muslim community. And yet we know from social psychology that spending time with the “other” is one of the best ways to understand and empathize with their humanity.

Can this small attempt be of any help in the morass that exists? It’s hard to know and easy to say no. But just as the wings of the butterfly in Atlantic Ocean may affect the tides in the Pacific, so we hope and pray that this is the beginning of connections and understanding, and ultimately, peace.

Nechama Liss-Levinson, Ph.D. is a psychologist and writer. Her most recent book “When the Hurricane Came” was a finalist in the National Jewish Book Awards.

Jews, Christians and Muslims Pray and Fast for Peace