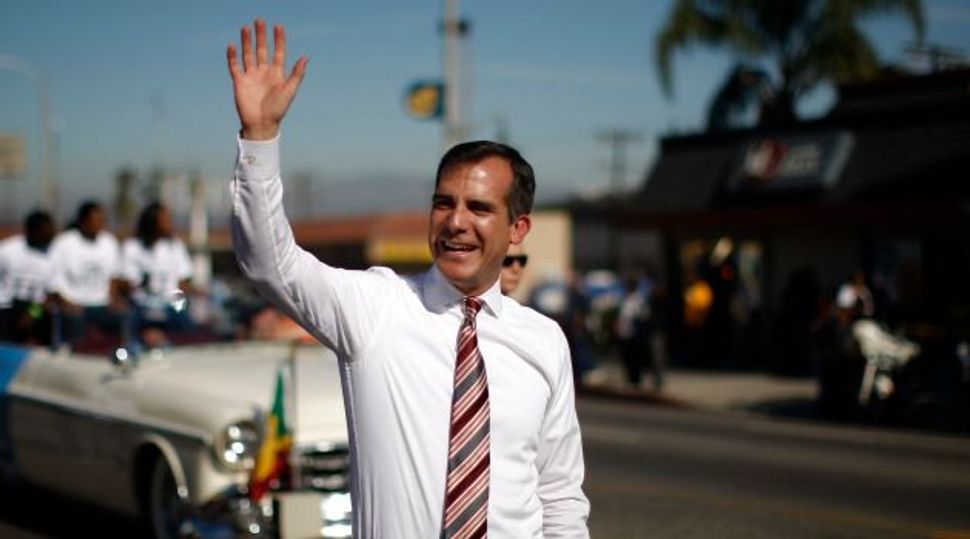 After a year on the job, Los Angeles Mayor Eric Garcetti, 43, has enjoyed mostly positive reviews from Angelenos and from observers of City Hall, who have credited his low-key governance style with helping reform the daily operations of the city’s government as well as with moving his “back to basics” initiatives forward in sectors such as job creation, traffic and public safety.

Though critics say that Garcetti has not been bold enough in creating and pursuing his agenda, the mayor can point to victories in securing lowered salaries and benefits for union workers of the Department of Water and Power, as well as to gaining the support of the U.S. Army Corps of Engineers for his ambitious $1 billion proposal to redevelop the L.A. River and its surrounding areas.

The city’s first elected Jewish mayor, Garcetti has also been actively involved with creating more cooperation between L.A. and Israel, most recently in the form of the Los Angeles/Eilat Innovation and Cooperation Task Force, which aims to help Israeli and Southern California-based businesses, universities and not-for-profits work together to solve issues related to water resources, solar energy and other environmental technologies.

In an interview held at his office in Downtown Los Angeles Garcetti and the Forward’s Noah Smith discussed issues related to the Jewish and Israeli communities.

Noah Smith: In light of recent proposals to boycott and/or divest from Israel, on University of California campuses and throughout the country, what are some of the specific ways in which the City of Los Angeles benefits from its cooperation with the State of Israel and its businesses and universities?

Eric Garcetti: Because we have similar land and similar challenges of drought, of energy independence, of economic development, I think we feel a real natural affinity with Israel. With the coast line and mountains, you go to Israel and you feel like you’re in California and vice versa, which I think is why so many Israelis probably settle here so comfortably and there are such close ties. This is not only an important Jewish city, it has now become an important Israeli-American city, I think one of the great cities of Israeli expats in the world.

In terms of specific programs, there’s a lot of tech stuff going on. Silicon Valley is still No. 1, Tel Aviv is 2 and L.A. is 3 in the world when you look at tech startups. I think the Eilat partnership will be a really interesting one, because we are out of water right now and people see this as something that’s an opportunity to make more resilient cities, but also [as something] for jobs.

As far as divestment, the City of L.A. went further than having to just do these [divestment votes] one at a time. We now have a policy to say we will never not do business because of BDS [boycott, divestment and sanctions] with a company…. Councilmember [Bob] Blumenfield put that forward, I signed it into law and it’s now a policy of the city.

Why did you decide to endorse that proposal?

I’m a Jewish mayor. I’m supportive of the State of Israel, so I have a personal impulse, but I can make the case to anybody, whether they care about Israel or not, that this is in our selfish interest and [Israel is] one of the most aligned places in the world with the same needs we have, and L.A. is probably the most open place in the world, the most diverse population ever put together in one place. If in any way we were to shut down those ties with anybody, then that would come at a cost to who we are.

What do you see as the major implications of the increasingly organized Israeli community in L.A. and within the United States?

In the past, American Jews and Israelis were conflated in the minds of non-Jews as well as by Jews themselves, and I think the diversity of Judaism worldwide and the diversity of Israel are really important to write a new chapter. People know that not all Jews are Israelis and not all Israelis are Jews. But a lot of people don’t know much about Israel. They might have heard something about conflict in the Middle East, or support America’s friendship with Israel, but they don’t really know what a Bedouin tent is; they don’t understand how many Israeli Muslims there are they don’t know that there are Palestinian-Christians that are Israeli citizens, that this is a state that protects the religious heritage of so many traditions. I think there’s a lot to make that not just a political event, but a cultural exchange

How would you characterize the relationship between the Latino community and the Jewish and pro-Israel communities?

I think there is a strong relationship between Jews and Latinos. Certainly among leaders there has been a conscious effort for the last 20 years, and I think there have been good initiatives…. That said, the average Latino probably doesn’t know a lot about Jews, and the average Jew probably doesn’t know a lot about Latino culture here, so I think, for your average resident, there’s still a lot of work to be done.

I think for a lot of Jews they probably think Mexicans and Latinos are primarily lower class, while Latinos probably think every Jew is rich…and the more we can do to show that both communities are incredibly diverse, that these stereotypes don’t hold across an entire community, it will strengthen the ability of the Jewish community to make an impact in America, because if Jews aren’t involved with Latinos, the changing demographics are going to pass them by. I feel in a unique position, obviously, to help bridge that, because I am the bridge. I am the genetic bridge between us. I feel very proud to be both a Latino and a Jew,

You recently posted a photo of yourself on Instagram in which you’re wearing a yarmulke. Were you surprised by the number of anti-Semitic comments it received?

Because I have an Italian last name, most people have never assumed quickly [that] I’m Latino or Jewish, so I got to hear what people really think of Jews and Latinos. I’ve always kind of had this ability to cross borders and to confront people in unexpected places and challenge them, so I haven’t been as much of a recipient of anti-Semitism as my grandparents, would have been, or my great-grandparents certainly. The forest fire of anti-Semitism may have burned out in this country, but there are still a lot of brush fires and they have the ability to light up. It made me feel a little exposed, a little sad, but also made me feel connected to what so many people feel in a much more extreme way — not just Jews, but people who experience racism and prejudice.