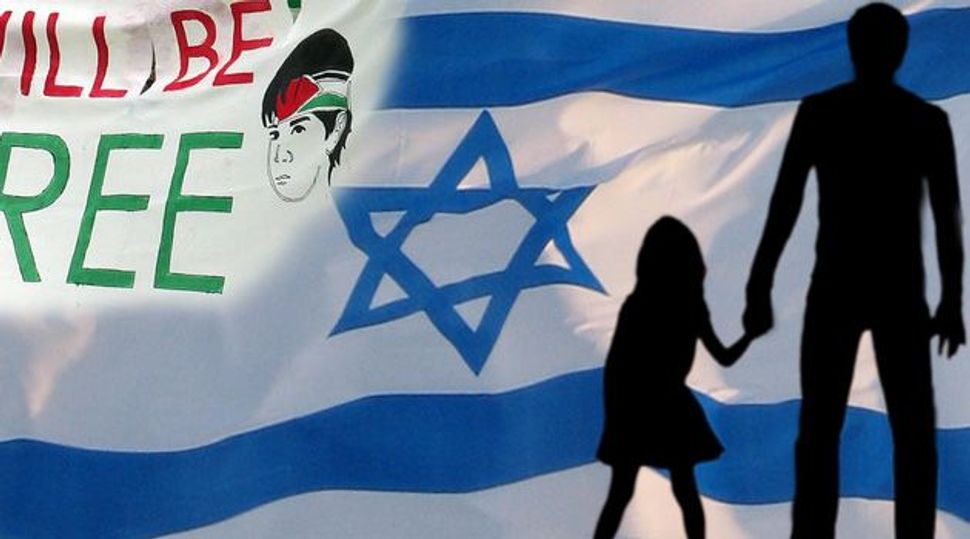 It pains and shocks me to say this, but here goes: My father was right all along. He always told me, as I spouted liberal talking points at the Shabbos table and challenged his hawkish views on Israel and the Palestinians to his unending chagrin, that I would one day change my tune.

I guess on the whole Israel thing, I used to be kind of pareve. Not so much on the country’s scenic landscape or its culture, which I loved and deeply appreciated: its vibrancy and sheer chutzpah; its gorgeous men who looked nothing like the pimply boys in my hometown of Flatbush, whether they were in uniform or not; its falafel. But on the whole ardent Zionist devotion to the Jewish homeland that characterized the majority of my Israeli relatives, both sabras and American olim, I hesitated to commit similarly.

I admit that this was largely due to my rebellious nature, which had me instinctively buck any familial trend. I relished my role as the token liberal in an almost-uniformly Republican family. I liked looking beyond my immediate circle and empathizing with people who weren’t necessarily Jewish, white, or upper-middle class. And when I made friends at age 16 with a left-leaning socialist who saw clearly the persecution of the Palestinian people by the state of Israel, I only grew more daring in my critiques of the Jewish state. The discussions with my father grew more heated.

“Tova, one of these days you’re going to grow up and realize that Israel is all the Jews have,” he said to me, banging the table for emphasis. I sneered at his naiveté. This was America, for God’s sake. It was 2004. Being a Jew was more than acceptable: It was cool. And I continued to routinely call Israel’s policies into question, because I was a good little liberal.

But, alarmingly, my father seems to have been right. Everywhere I look, there’s news of anti-Israel demonstrations that regularly devolve into openly anti-Jewish sentiment, weakening the position — which I once held — that anti-Zionism and anti-Semitism are separate entities. The line between the two is growing blurrier, and fast. When angry protesters shout “Death to the Jews!” at “anti-Israel” rallies in Antwerp, Berlin and London, and Jews are trapped in a Paris synagogue and firebombed by an angry mob, how can you honestly posit that anti-Zionism has nothing to do with anti-Semitism?

I guess I shouldn’t be surprised that things like this are happening in 2014. The past has shown us that the world is not always kind to the Jews, and also that history tends to repeat itself. Just as I’m finding that anti-Zionism and anti-Semitism are too closely intertwined for comfort, I’m also finding that it’s becoming increasingly difficult to separate my identity as an American Jew and as a Jew who needs a homeland where I will always be welcomed solely because I am Jewish.

An innocent civilian being killed on either side is tragic — on that, I think, or hope, we can all agree. Extreme statements like “Israel is an apartheid state” or “Every Palestinian wants every Jew dead, so let’s wipe them off the map first” do no one any favors, most moderate commentators can recognize. But there is a difference in the way this war is being fought on either side. If the Palestinians stopped lobbing rockets and kidnapping innocent teenagers, Israel would stop, too. But if Israel stopped defending itself against such attacks, the Palestinians would only continue. History, again, has proven this. Only one side elected an internationally-recognized terrorist organization to lead them, and only one side makes efforts to warn innocent civilians of impending defensive attacks and offers medical treatment to wounded victims whatever their ethnicity or religion. Yet the world’s opinion remains overwhelmingly and resoundingly against Israel — and with it, increasingly, against the Jewish people.

I watch the bombastic back-and-forth between various Facebook friends on both sides of the issue, and I hesitate to throw my hat into the ring. I’m smart enough to know that I don’t have all the answers. And while I recognize that others find comfort and community in virtual preaching from the safety of social media soapboxes, I find little use for it. But perhaps this can serve as my public mea culpa for years of never believing that there often exist kernels of good old-fashioned Jew-hatred within anti-Israel rhetoric.

I’m not handing in my liberal card just yet: I still think equal rights for LGBT folks and women’s autonomy over their own reproductive choices are givens. But amidst the rising vitriol toward Israel that’s extended itself to the Jewish people in such “enlightened” cities as Paris and London, I find myself coming around to my family’s passionate Zionist beliefs, and to their opinion that Israel may one day be the only homeland left to offer all Jews a place of refuge from a hostile world. Let my father feel the satisfaction, for once, of knowing he was right all along.

Tova Ross is a freelance writer and editor who regularly contributes to Kveller and Tablet Magazine. Her work has appeared in The New York Times, Los Angeles Times, Huffington Post, xoJane, The Forward and The Jewish Week.