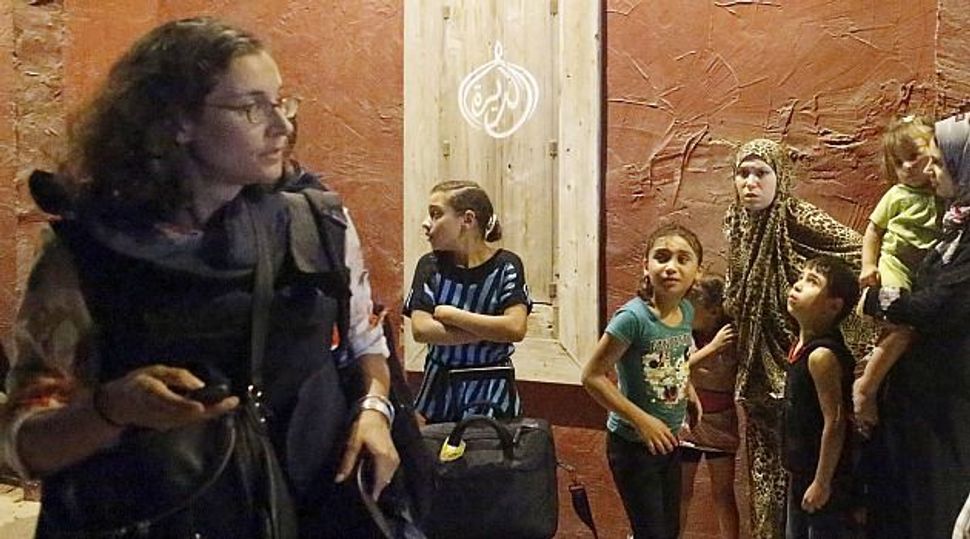 New Way To War: A foreign correspondent uses her phone after four Palestinian boys were killed by Israeli shelling in front of hotel where many reporters were staying. Image by getty images

Shortly after Israel began its ground invasion of Gaza, Anne Barnard, a New York Times reporter who has covered wars for over a decade, stood in the emergency room of the Al-Shifa hospital in Gaza City and watched a 9-year-old girl die.

The girl was alone, without family, nameless. And when the doctor finally pronounced her dead, Barnard and another reporter wept.

And then she tweeted:

Israel’s wars are always fought on two fronts — the actual on-the-ground one and the battlefield of world opinion. The tricky part is that a victory on one front very often means a loss on the other: Say a house is bombed, killing a man in charge of a rocket launcher, but it also killed his family, including five children, whose lifeless bodies appear on television that night.

It’s not clear what front should have priority — your perspective on this will depend largely on whether you yourself are cowering in a bomb shelter in a city targeted by that rocket launcher or have the benefit of viewing all this from a safe distance.

But what’s absolutely certain now is that Twitter has been a game changer for the public perception front, demolishing much of the distance that allowed for attempts at objectivity and balance, the careful construction of stories that bow to the narratives of both sides. No more. Now it’s what’s right in front of a reporter’s face, in the immediate present — what they’re seeing, what they are feeling. (And these tweets are reaching many more people than before: Twitter now has 100 million more users than it did during the last Gaza operation, in 2012).

This war has provided hundreds of examples of reporters responding in real time like Barnard. When Israeli shelling on a Gaza beach killed four young boys , Western reporters who were staying at a nearby hotel witnessed it. Tyler Hicks, the Pulitzer Prize-winning photographer for The New York Times, not only tweeted, but also wrote up an unusual first-person piece for the paper, in which he expressed incredulity that Israel could have mistaken the children for Hamas fighters.

This was only the most well-known example. Every day has brought tweets like this one from Kim Sengupta from the British newspaper The Independent:

#Gaza met a man in Shejaiya two days ago who was determined not to leave his damaged house. Saw the house again today, totally destroyed.

Or this one from Sophia Jones of The Huffington Post:

This AM at al-Shifa hospital, where scores of terrified Shejaia civilians have fled, people were begging me & my colleague for help. #Gaza

And then there’s the now deleted tweet from CNN’s Diana Magnay observing Israelis cheering as bombs rained down on Gaza: “Israelis on hill above Sderot cheer as bombs land on #gaza; threaten to ‘destroy our car if I say a word wrong.’ Scum.” (CNN pulled her off the Gaza beat as a result).

This is fundamentally different from journalism from war zones as we’ve come to know it. Yes, the legendary CBS broadcaster Edward R. Murrow was able to report directly on what he was experiencing on the rooftops of London during the Blitz. But even he didn’t have access to a tool that allowed him to speak without any filter instantaneously to an unlimited number of people with the capacity for his words to go viral. As Barnard herself put it in an interview recently on NPR, she writes things in tweets that would never go in an article or get past an editor. In one tweet, she referred to that 9-year-old girl as “the unknown civilian,” something that then got retweeted thousands of times. Unlike in a news story, with a tweet like that, Barnard said, “people feel like they are getting a postcard from another human being who is experiencing something far away.”

To combat the impact of those postcards on people’s perception of the conflict, Israel has deployed logic — logic that often makes a great deal of sense. It is true that Hamas would kill many more Israeli civilians if it could, that a tallying of deaths doesn’t take into account “intended deaths.” It is true that Hamas bears responsibility for endangering its own population by shooting rockets from populated areas. And it is true that Israel has accepted unconditional cease-fires while Hamas hasn’t.

Fair or not, this argumentation, so rational and reasonable, is powerless when put up against an image or description of a dead child.

Israel faces a challenge now that it never dealt with in the pre-Twitter age, when the constructs of journalism actually helped mitigate the strength of that first overwhelming response that any reporter — any human being — would have to a situation of death and destruction. Newspaper articles strive toward an unemotional style, with editors cutting out anything that might hint at bias. We can see the difference if you look at the way Barnard’s experience with the dying girl at Al-Shifa made it into her story (co-bylined with Isabel Kershner) about the battle in the neighborhood of Shejaiya. A paragraph toward the bottom of the article, after much context — including an explanation of the fighting by an Israeli government official — described the scene in a much more muted way in a few economical sentences (“They covered her with a white sheet, and she was gone”). Nowhere near the raw emotional impact of her tweet.

This is not to say that the mood and immediacy captured by journalists on Twitter will always work against Israel. But in a battle involving asymmetric defense systems, in which the vast majority of the casualties are on the Palestinian’s side, Twitter punches you in the gut on behalf of those civilians in a way that overwhelms much else.

There’s no question that Israel will prevail on its on-the-ground front. As of this writing, with no cease-fire in place, the army is destroying tunnels and taking out more and more of Hamas’s rocket-launching capabilities. But on that other front — the arguably more significant one — it’s safe to say Israel has already lost. Because for all its vaunted technology and reasonable-sounding English-speaking spokesmen, there’s one thing Israel didn’t take into account: how your Twitter feed just made you feel.

Gal Beckerman is the opinion editor at the Forward and writes a regular column about the media. Contact him at [email protected] or on Twitter, @galbeckerman