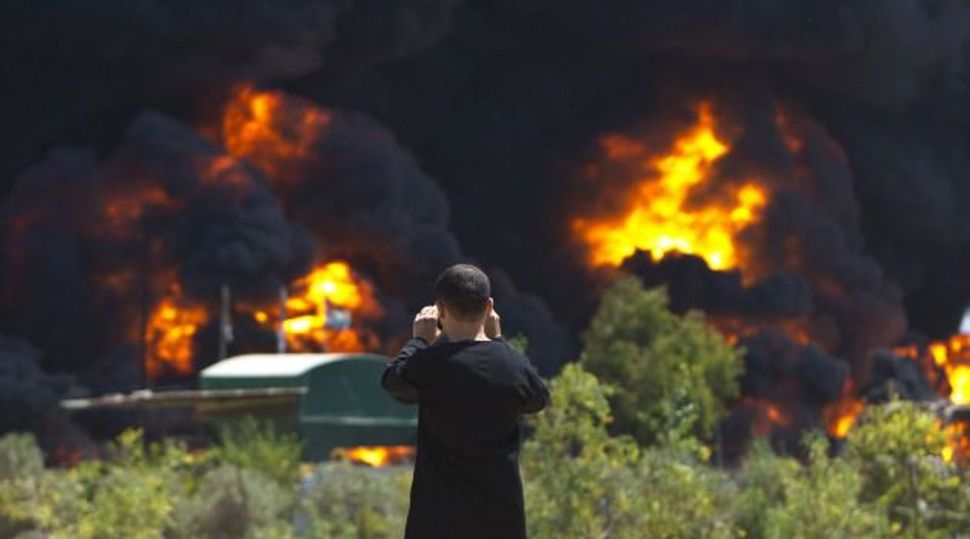 We’re all exhausted by the horrors of Gaza. Whatever our political points of view, this is a trying time to care about Israel, Palestine, or the prospects for peace in the Middle East.

Recently in these pages, my friend Rabbi Menachem Creditor has given eloquent voice to this frustration. He is fed up, he says — and judging from the re-posts and media attention, many other people are as well.

Yet his response — precisely because he identifies as a “left-leaning rabbi” — is deeply troubling.

Menachem’s piece, after its personal and sincere introduction, essentially has two parts: a repetition of the Israeli position that it is doing everything it can to minimize civilian casualties, and a laundry list of rhetorical questions put to a putative “enraged critic.”

Regrettably, Rabbi Creditor’s piece is a case study of how the posing of such questions indicates a shortfall of reflection, and an overflow of emotion. It is a technique that expresses outrage, not analysis.

In fact, every one of Menachem’s questions has a perfectly articulate answer. Namely:

They desire that Israeli actions match Israeli words. John Kerry was absolutely right: if this is a “pinpoint strike,” it’s a hell of a pinpoint. Yes, Hamas is evil, targets civilians, and uses human shields. Yes, they have mercilessly stationed their forces in schools and hospitals.

But the Israeli propaganda that this is a purely defensive action, and that Israel has bent over backwards to minimize civilian deaths is propaganda, not fact.

This operation was avoidable in two ways.

First, it was strategic, not defensive. Israel has a strategic goal of eliminating Hamas, and it used the pretext of the kidnapping (and a trickle of impotent rockets) to pursue that goal. It has chosen this war, knowing full well that hundreds (perhaps thousands by the time this is over) of civilians will die. Its goal may be justified, but let’s not pretend Israel has some moral high ground here.

Of course, Israel is not deliberately targeting civilians, and Hamas is. But Israel has dropped 3,000 tons of explosives on Gaza and killed over 800 people, compared with Hamas’s approximately 30 tons (based on the mix of M302s, WS2s, and Qassams) and 2 civilian casualties caused by them. (Casualties of the rockets, that is.)

So what do “enraged critics” truly desire? An end to Israeli double-talk. If Israel’s government truly wanted peace, it would have had it by now.

“How is it possible to hear indignant claims of human rights violations in the context of Syrians slaughtered by the hundreds of thousands, state-sanctioned terrorism around the globe, and young immigrants treated like chattel by the US and other?”

The insinuation here is that “the world hates Israel.” But that position is, again, emotional rather than factual; inciting rather than insightful. Of course, there has been disgusting anti-Semitism among many anti-Israel protests. But conflating extremists with “the world” says more about our own collective trauma than the reality of Israel’s international position.

And as terrible as the current immigration crisis is, I don’t think it compares to the massive aerial bombardment of entire neighborhoods.

“Were Hamas to truly lead its people forward to a life of stability and peace, wouldn’t it use building materials for schools instead of smuggling tunnels? Wouldn’t Hamas stop stockpiling weapons in mosques and transporting them in UN ambulances?”

Not necessarily. Hamas believes that accommodation of Israel is pointless – a position validated by twenty years of Israeli stalling on the “peace process.” In the context of an armed resistance, these choices make sense. Of course I don’t agree with them, but they are comprehensible. Likewise:

“Wouldn’t Hamas stop firing missiles from civilian population centers if it valued Palestinian lives as much as Israel does?”

It’s time to abandon this canard, memorably stated by Golda Meir, that Palestinians do not value the lives of their own people. This, too, is deeply unhelpful to achieving understanding. I am fully on board with highlighting and showcasing Hamas’s brutal military tactics, which have put their own people in such peril. But let’s not conflate that with not valuing those lives.

Note the effect of these last two questions. Hamas is barbaric, irrational, Other, less than human. Here my “left-leaning” friend sounds like the Islamophobe Pamela Geller. This heat-without-light is extremely unhelpful to defusing the current situation. Hamas may be evil, violent, and extremist – but they are not monsters. There is a difference.

“If Israel weren’t so concerned for Palestinian lives, wouldn’t it respond to Hamas’ horrific decisions in kind?”

Well, Israel is also concerned about world opinion, and its massive aid from the United States, and the future case that will be inevitably filed in the International Court of Justice. Surely Menachem doesn’t believe it’s simply altruism that is holding back an even more brutal assault. It’s realpolitik.

Again, though, this question omits the tonnage disparity between the two sides. Hamas is a guerilla organization with pathetic shoulder-launched rockets. Yes, they are using human shields and that is despicable. But if we’re talking about responding ‘in kind,’ I suspect the residents of Gaza would prefer M-302 or WS-2 rockets aimed at civilians to the wholesale bombardment of their neighborhoods. There would certainly be fewer people dead.

“Would you have us not respond to this monstrosity?”

Israel’s critics divide on this point. Some, indeed, believe Israel shouldn’t exist in the first place. However, as a two-state-supporting Zionist, I think the question is too narrow. Yes, I would support a proportional military response to Hamas’s low-level attacks on Israeli civilians.

But as discussed above, the monstrosity is also of Israel’s doing. Let’s not fall into the simplistic us/them dichotomy of “we were just minding our business when they started firing rockets at us.” We were not just minding our business. We were building settlements, manning checkpoints, and filling jails. We were stalling on negotiations and undermining moderates. The “monstrosity” is, in part, our creation.

“Do you think it’s not worth losing the PR battle to retain our humanity and save as many lives as possible?”

The premise is flawed. Is Israel really saving as many lives as possible? It’s certainly saving Israeli lives – although given the accuracy of Hamas’s rockets, not many were so endangered in the first place.

But as to lives generally, the current Israeli tactics will inevitably cause civilian casualties. A more “pinpoint” approach would have caused less. It would also have been less effective. Israel’s government made a tactical decision that would cost more lives.

Once more, that choice may be defended, but it should not be obscured. Israel made a calculated decision to take more civilian lives in the service of a strategic objective. It’s reasonable to support that, and to object to it.

“What country would stand by when thousands of terrorist missiles assault its citizens?”

To be clear, the “thousands” (actually about 2100) of missiles rained down after Operation ‘Protective Edge’ began. From January until July, 172 rockets were fired – including 60 by Islamic Jihad – and caused zero injuries. All 172 firings were war crimes. But again, let’s not pretend that there was some massive bombardment prior to the Israeli operation.

This was a war of choice on Israel’s part. Maybe that choice was correct, but let’s not make a bogus claim of innocence.

Finally, Menachem’s most troubling claims come at the end: namely that he’s done “apologizing” because of the horrible anti-Semitic displays we’ve seen in Boston, Paris, Antwerp, and Berlin. I’ll end with some rhetorical questions of my own.

Did these precede, or follow, Operation Protective Edge? Will amping up our own rhetoric help, or hurt, this situation? Is “apologizing” the only alternative to emotional tribalism (“we will do what we must to protect our people”)? Is there not a space for reasoned analysis, in the face of hate, slander, and vituperation?

Or are “we” indeed doomed to fall to “their” level of discourse?