Prayers for the State of Israel. Yes, Now, on Tisha B’Av 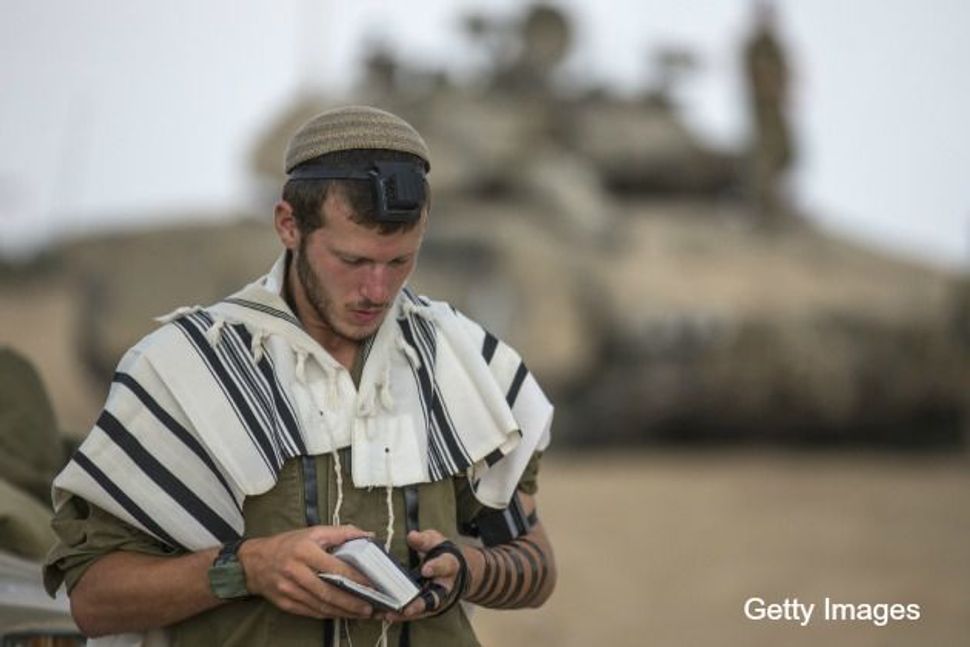 I get the impression that a lot of folks are feeling lost and helpless right now as we watch the tragedy unfolding in Israel and Gaza. Especially with Tisha b’Av approaching, people are looking for some way to express what they’re feeling in a manner that joins them with others in a community of spirit, of longing and grief and hope. I gather, too, that many of us are tired of the rancor that divides us when what we really want is to feel the bond of kinship that transcends political differences.

For what it’s worth, my own feeling is that the best way to reach across that empty space and fold myself into the spirit of the Jewish community, transcending the rancor and reaching back over the generations, is by prayer. Not the close-your-eyes-and-listen-to-the-universe sort of prayer — not that there’s anything wrong with that if it works for you — but I’m talking about reciting Hebrew prayers as Jews are reciting them around the world and have been for years. When we speak together in unison, we become joined in spirit in a way that transcends differences of the moment. (Yes, even gigantic moral differences can be transcended. If we let them.)

Right now I’m thinking about the Prayer for the State of Israel. Basically the one composed in 1949 by the chief rabbis of Israel, Yitzhak Halevi Herzog (yup, grandfather of) and Ben-Zion Uziel, though some say it was composed for them by the future Nobel laureate author Shmuel Yosef Agnon. The original been adapted and rewritten dozens of times to express the feelings and beliefs of our diverse communities around the world, which is in itself a very honored tradition in Jewish prayer (that’s why even in Orthodoxy there are Ashkenazi, Sephardi, Hasidic and other prayerbooks). The Union for Reform Judaism has a nice selection of prayers for Israel on its website (find it here). Conservative congregations traditionally recite just the first two paragraphs. A favorite among Reconstructionists and other progressives is based on the one developed by Congregation Kol Haneshama in Jerusalem (here), which elegantly gets around patriarchal language.

My own absolute favorite, though, happens to be the one used in my own minyan, which comes from Rabbi Ben-Zion Bokser’s 1983 prayerbook. To my mind it finds a beautiful middle ground between the triumphalism of the chief rabbis’ original and the universalism of many newer versions:

Prayer for the State of Israel

Our father in heaven, rock and redeemer of Israel, bless the State of Israel, [that it may be] the first flowering of our redemption. Guard over it with your lovingkindness, envelop it in your peace, and cast your light and truth upon its leaders, ministers and advisers, and bolster them with good counsel before you.

Strengthen the hands of the defenders of our holy land, and grant them deliverance, O our God, and cloak them in victory; and grant peace to the land and eternal happiness to its inhabitants.

And watch over our brethren, all the house of Israel in all the lands of their dispersion, and unite our hearts in love and awe of your name, to keep all the words of your Torah, so that we may be a blessing to all the inhabitants of your earth. Fulfill in us the vision of your prophet: For out of Zion will come the Law, and the word of God from Jerusalem. Amen.

If that’s too traditional for you, here’s a wonderfully moving prayer from the 1975 Reform prayerbook Gates of Prayer. It opens with a passage from Hannah Senesh’s poem “Blessed Is the Match” (“Ashrei HaGafrur”):

Blessed is the match consumed in kindling flame.

Blessed is the flame that burns in the heart’s secret places.

Blessed is the heart with strength to stop its beating for honor’s sake.

Blessed is the match consumed in kindling flame.

Israel, born in pain, has lived in peril. We pray for the welfare of her people and their land. May they dwell in safety and live in peace and friendship with their neighbors.

Pray for the peace of Jerusalem:

may those who love you prosper!

Let there be peace in your homes,

safety within your borders.

For the sake of my people,

My friends, I pray you find peace.

For the sake of the House of the

Lord our God, I will seek your good.

Whichever version you choose, say it out loud. Or go to synagogue tomorrow morning, and when you get to that prayer, right after the Torah reading, belt it out.

On a personal note I have a private tradition: when we come to the words “reshit tzmichat ge’ulateinu,” “the first flowering of our redemption,” I precede them with the word שתהא (she-tehei, “that it may be” or “become”). The first flowering of redemption is a theological concept developed by the first Ashkenazi chief rabbi of modern Israel, the revered Avraham Yitzhak Hacohen Kook (1865-1935), who was sensitive to the belief of most Orthodox rabbis in his day that rebuilding the Jewish state before the coming of the Messiah was a sinful defiance of God’s will. His conclusion was that the young socialists who were building Israel couldn’t be accused of defying God, since they didn’t even believe in God, so it must be that they were unknowingly carrying out the divine will, a sign that redemption was on the way. As it happens the Six-Day War and the capture of the Old City of Jerusalem and the hills of Judea and Samaria lit a prairie fire among believers, led by Kook’s own son Rabbi Zvi Yehuda Kook. They believed the miraculous six-day victory was a sure sign that redemption was around the corner if only Jews had the strength to seize and inhabit the entire land as in the days of Joshua. The result, I think, is a reminder that however much we think we may know, it’s dangerous to be too certain that our interpretation of God’s will is the right one. There are 70 faces to the Torah, tradition teaches. Hanging the fate of the rest of the nation, not to mention our neighbors and the rest of humanity, on the face that we happen to prefer is what some folks call hubris.

I hope that we will find that the rebirth of the state of Israel will yet prove to be the first flowering of our redemption, but I don’t think it’s right to bet somebody else’s farm on the proposition. So I say “bless the state of Israel, that it may be the first flowering of our redemption” — ברך את מדינת ישראל שתהא ראשית צמיחת גאולתנו “barech et Medinat Yisrael she-tehei reisheet tzmichat ge-ulateinu.”

Prayers for the State of Israel. Yes, Now, on Tisha B’Av