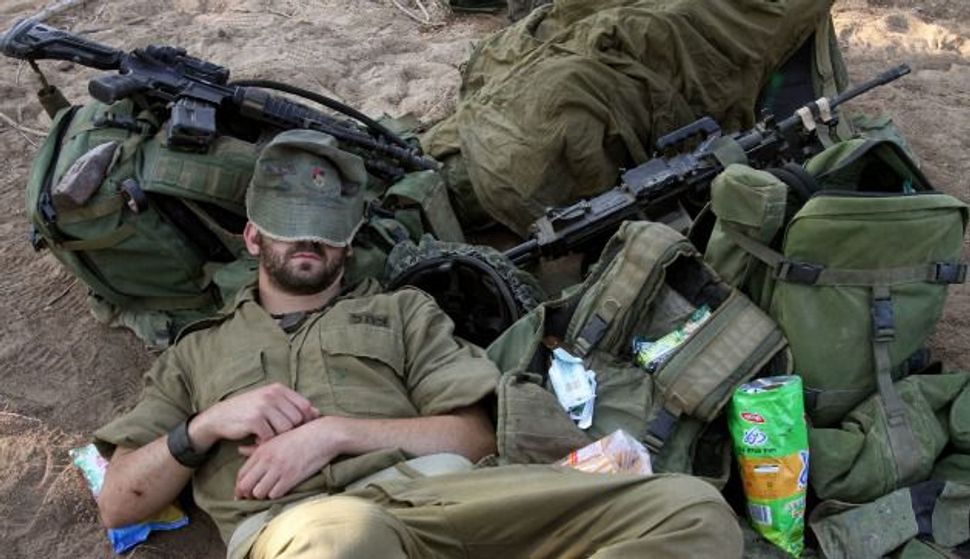 This was posted this morning at Haaretz in Hebrew by Niv Shtendel, an Israeli blogger, filmmaker, author, film and television critic for Haaretz and Maariv. It describes his experience of — and impressions of — Operation Protective Edge as a middle-aged reservist called up to the front. My translation, so any mistakes are mine alone. (Hat tip to Chemi Shalev for posting it on Facebook.)

26 things I learned in 26 days on the Gaza border

2.) On the other hand, if we had to launch a military operation just to be rid of Danny Danon, it was worth it.

3.) Four Shabbat dinners in a row that I missed. Four Shabbatot. That hasn’t happened to me since my compulsory service.

4.) It doesn’t matter how hard you think you have it — there’s always someone who has it harder. If you’re a 25-year-old reservist who’s missing university exams, look at the 40-year-old reservist who’s left a wife and five kids at home. If you’re a soldier sleeping in a public shelter without a mattress, take a look at the soldier who just crossed the fence back into Israel for five hours of rest. That’s how it is: There’s a hierarchy to suffering, and reality has proportions.

5.) The face of war in the modern age: You’re sitting with two communications devices next to your ears and getting your information from the social website Rotter.net.

6.) Anyone who’s never heard the whistle of a mortar shell doesn’t know what death sounds like when it’s out looking for you.

7.) It’s hard to overstate the benefit of Iron Dome. The ability to carry on normal life under a constant threat of missile fire is almost incomprehensible. Sometimes even defensive weaponry can be game-changing weaponry.

9.) And in the meantime, the communities along the Gaza border are living on burning ground. Ask the residents there what they think about the government that stripped down the military defenses from their settlements — the same military defenses that it left untouched for the settlements in Judea and Samaria. Ask them. I don’t have to ask, because they volunteered the information.

11.) Whoever said that war is bad for business apparently doesn’t own a retail chain. Judging by the flow of boxes of contributions to the front, it seems the warehouses of the grocery chains and producers of candies and personal care products have emptied their shelves. Moist towelettes and toothpaste are to Protective Edge what masking tape was to the Gulf War.

12.) The thing that most moves me (other than soccer) is the children. The letters of the children who send us boxes of candy and soap bore into me and explode inside like a booby trap in a tunnel. But to read sentences like “Thank you for intercepting the incoming missiles” (what a frightful conceptual lexicon for a child) or “One day I want to be a soldier so I can protect you” (what a dreary reality to grow into) cut into me even more deeply. They grind me into the dust.

13.) This war is going to be expensive. The army will want to rearm, the defense establishment will look for an “Iron Dome against tunnels” and National Insurance will have to pay tens of thousands of reservists. And that’s before we’ve gotten to the collateral damage (workers absent from the job, damage to domestic tourism, drop in foreign investment and so on). As usual in wars, the only one to benefit is the army.

14.) The IDF has been rehabilitated by Protective Edge. Public legitimacy, which was hurt in the last few months, is back at full strength. The money, as noted, will flow accordingly. There will be internal and external commissions of inquiry. They’ll examine whether the political leadership absorbed the warnings about the tunnels. They’ll examine whether it was right to bring armored personnel carriers into Gaza. But the IDF is strong. The IDF will survive. In our internecine wars, the IDF always wins.

15.) But this too must be said: This army, which I’ve criticized more than any other institution in the state, and which I think is fat, corrupt, chaotic, exploitative and unequal, is a fundamentally good army. I’m not speaking about its professionalism, but about its human and moral qualities. It’s important to say this during wartime. I’m proud to be fighting alongside the people I’m with. I’m proud to wear this uniform.

16.) I don’t know if the IDF is winning or losing the battles, but I’m certain that it’s showing the enemy a good fight in the pathos competition. The demagogic speeches of Hamas sometimes pale in comparison with the bathos-laden rhetoric of some IDF commanders. Let every Hebrew mother know that she’s placed the fate of her sons in the hands of officers who come up with phrases like “Activities are in the Scouts. Campaigns are on the supermarket discount shelves. In Gaza there’s war.”

17.) On the whole, it seems to me that the entire class of IDF field commanders, from colonel on down, are disappointed that Protective Edge is classified as an operation, while for them it’s a war in every sense. Without going into details of grammar, it testifies mainly to a generation of officers whose hunger for battle apparently gives them itchy fingers. Readiness for engagement is a fundamental value in the IDF, but militancy is a disastrous instinct.

18.) I’m not fighting in the name of the God of the battles of Israel. I’m fighting for my country and my society. I hope that’s O.K. with Colonel Ofer Winter, the controversial religious-nationalist commander of the Givati Brigade.

By the way, I’ve been in battle, I’ve carried a weapon and I know what fighting spirit is. And I’m still critical of Winter. His latest speech isn’t the first time his ideological motivation has tripped him up — the one where he arrogantly claimed that “clouds of glory” had defended his troops in Gaza, and then he lost two soldiers in the battle where Hadar Goldin was captured [this was written before Goldin was declared dead — jjg] — and it apparently won’t be the last time, either.

20.) No matter how right-wing you are, you must remember that the explosions you hear on the other side of the border fence are the sounds of bombs destroying homes. You don’t have to be a leftist for this to touch your heart. You just have to be a human being.

21.) No matter how left-wing you are, you must remember that you’re fighting against an army of human beasts. You’re fighting against people who use civilians as human shields, who drag the bodies of dead collaborators through the city streets, who exploit the instinct of human compassion to do wrong. These are human beasts. But you don’t have to descend to their level. You just need to match the power in your fist to the extreme, evil cruelty that faces you.

22.) Last Thursday at noon I was supposed to be on a plane to Crete. Instead, on Thursday at noon I was an armored knight on my way to one of the communities along the Gaza border. And I’m sorry to say I don’t regret it for a minute. In any event I wouldn’t feel capable of leaving the country right now. My passport may be up to date, but my head and heart are grounded.

25.) This may be my last week in the operation. And if it ends for me before it ends for the state, what will remain in my heart is a sense of loss. Because whatever I think if Protective Edge — and I think it’s the same coitus interruptus we always reenact in the peace process, now in negotiations, now in war — this operation has been my entire experience for the past month. To watch it suddenly from afar, in civilian clothes, via television and Internet, will be strange. This operation is already a part of me.

And in another moment: the operation ends, the war ends, the current rounds. There’s a cease-fire. Eighteen months of quiet, and we’re back at it.