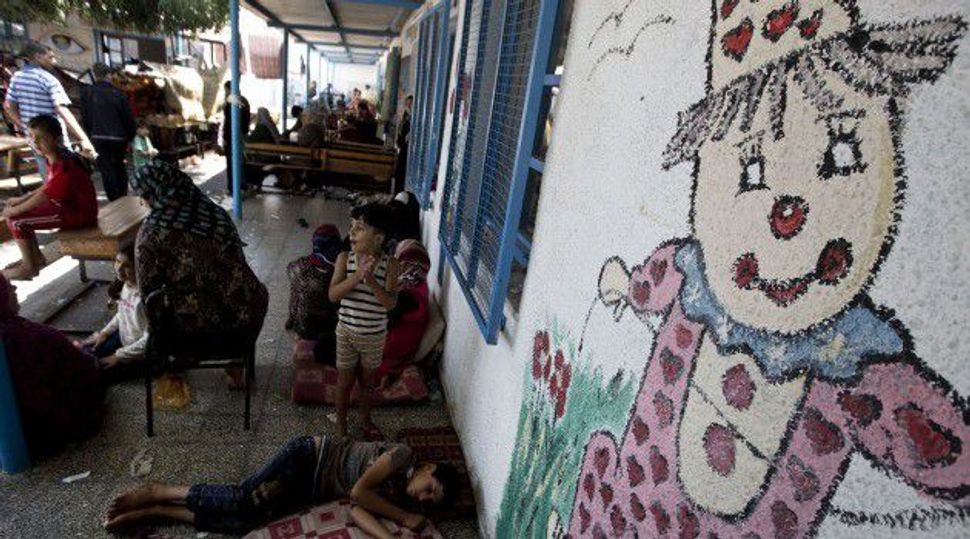 For Israelis and Palestinians, as well for their friends and family around the world, these past few weeks have been torture. Each day for Israel brings new rocket attacks, new cross-border terrorist raids, new funerals and shivas for IDF soldiers. Each day for Palestinians in Gaza brings new rounds of artillery shelling, fresh explosions and devastation. We spend all day desperately wanting to avert our eyes from the carnage, and go to bed every night hoping that by morning, the fighting will have stopped.

As devoted friends of Israel and passionate advocates for Israeli-Palestinian peace, we at J Street have been clear since the fighting began that Israel has a definite and obvious right, as all nations do, to defend its citizens against terrorism. Hamas is a repugnant terrorist organization whose sworn aim is the destruction of the state and people of Israel. Failure to recognize this represents willful blindness.

We cannot, however, as American Jewish friends of Israel, turn a blind eye to the plight of Gazan civilians. Some deeply disturbing rhetoric has come from some in the American Jewish community – not just from the fringe, but from well-respected leaders. In an article last week, American Jewish Committee Executive Director David Harris wrote bitterly of the international community’s concern for “poor, defenseless Gaza.” Responding to the recent tragedies of Palestinian children dying in United Nations schools, he correctly noted several documented instances of Hamas hiding weapons in such schools. Instead of condemning Hamas and expressing sympathy with the plight of the defenseless children, Harris attributed their deaths to “patterns of behavior” of Palestinian parents, who “allow [their] children to go to a school which is used as an arms depot.”

This conflation of all Gazans with Hamas is untrue and unacceptable. The article did not mention that children killed at the UN school in Jabalya were there seeking shelter because Israel had told them, and hundreds of thousands of others, that their homes could face bombing and shelling. It omitted that all exits and entrances to Gaza are controlled by Israel and Egypt, leaving Gazan civilians with nowhere to go and nowhere else to hide. The White House has condemned the shelling of the school as “totally indefensible.”

Harris wrote that for Jews, “our corner of the world is about the affirmation of life. That defines the core of our being, the essence of the societies we aspire to build, and the way we conduct ourselves.” We agree. Affirming and respecting life is exactly what Jewish people should aspire to.

Shelling a shelter for refugee children violates that commitment, as does Harris’ justification of it. Refusing to show compassion for innocent casualties by implying that all Gazans are terrorists and death-worshippers is not life-affirming. Neither is comparing all of Israel’s enemies to Nazis. This is fear-mongering of the worst sort, and it trivializes the greatest calamity in our history.

This sort of rhetoric perpetuates a situation that costs Israeli lives. Depicting all Gazans as terrorists strengthens Hamas, which seeks to turn every Palestinian into a devoted enemy of Israel. Extremists who traffic in hatred and violence thrive on hopelessness, despair, and deprivation. We cannot mirror their logic and allow ourselves to embrace “total war.”

Every blow to Gaza’s civilian infrastructure is a future problem that Israelis and Palestinians will face when they eventually return to negotiations. Every civilian death will live on for decades in the grief and anger of their families. These two peoples cannot live in perpetual war without ultimately destroying themselves – they must find a way to grant each other the peace and security they yearn for and deserve.

If we value life and want to find a solution that propels us forward, we must acknowledge the humanity and genuinely tragic plight of the Palestinians. We must also think seriously about the context from which the latest violence emerged. Our community thunders with rightful condemnations of rocket attacks on Israel, but where was this passion a few months ago when American leaders were working to negotiate a two-state peace agreement? We mourn fallen IDF soldiers, yet we have not done nearly enough to prevent the violence that cost them their lives.

Harris’ argument encourages us to believe that we have no choice but to acquiesce in the destruction and death in Israel and Gaza. Instead, we should speak up loudly and clearly in support of diplomacy and a two-state solution. To shirk our responsibility is to accept permanent conflict when what Israel so desperately needs is lasting peace. This fails Israelis when they need us most. We can and must do better.

Logan Bayroff and Jacob Plitman are both former Presidents of the J Street U National Board, and both currently work for J Street.