Why Jews Should Care About Ferguson 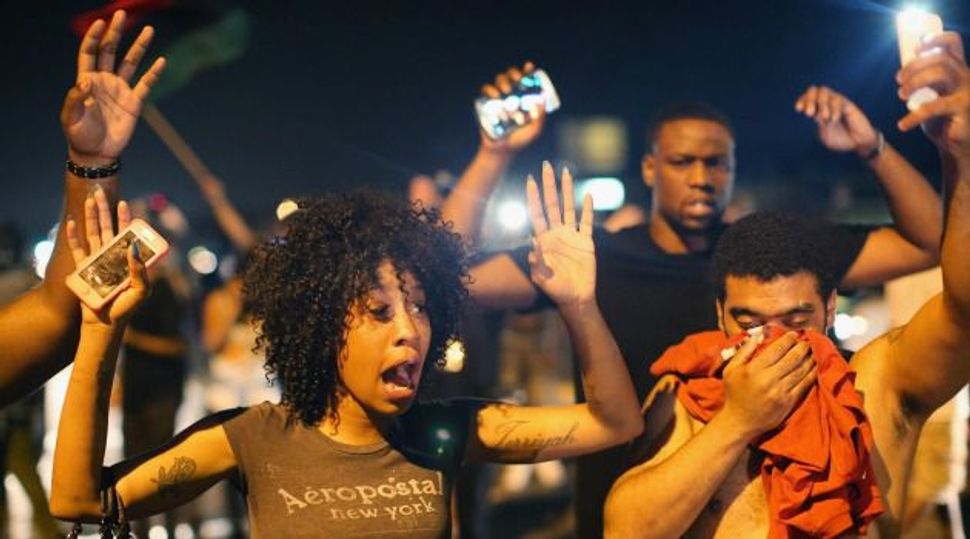 Standing Their Ground: Demonstrators protesting the killing of teenager Michael Brown by a Ferguson police officer are hit by tear gas. Image by Getty Images

In many ways, it has always been like this. As long as there has been an American republic, there have been white men in power oppressing everyone else. And more particularly, (disproportionately) white soldiers and cops committing acts of violence against (disproportionately) people of color. Not much new here.

And yet, it has never been so simple, either. “Intersectionality,” the understanding that multiple vectors of oppression — race, class, gender, etc. — often overlap, is a recent word, coined in 1989 by law professor Kimberlé Crenshaw. But it is an old concept. How old? Bible old. “Do not oppress the widow or the fatherless, the foreigner or the poor,” says Zechariah 7:10. Gender, class, race.

A conflagration like Ferguson, Missouri, cannot be reduced to a single factor. It is a combination of racism, militarization, economic insecurity, the widening wealth gap, disenfranchisement, black rage, and God knows what else.

Nor can it be reduced to a few bad guys. The issue is not whether Police Officer Darren Wilson is a racist or not. What matters is how he and Michael Brown are part of structures of racism and oppression that are far more powerful than any individual. Yes, Brown was shot six times by Wilson. But he was killed by a “bonfire of the vanities,” this tragic web of circumstances and power relationships that you and I are part of too.

And if you and I are part of that web, then we, too, are implicated in the way in which structures of oppression continue to hurt the most vulnerable — whether the victims are unarmed black men on the streets of Staten Island or Missouri, or six-year-olds crossing the U.S.-Mexico border, or women whose bodies are controlled by men.

A few decades ago, it would have been easy to add Jews to that list of disempowered victims. I could throw in Leo Frank, the victim of mob justice; or otherwise privileged Jewish men denied entrance to elite universities. These days, however, we have to search a lot harder.

There are still victims of anti-Semitism, of course — the shooting in Overland Park, Kansas, was only four months ago, and the recent pogroms in Europe have been chilling. But there is a crucial difference between these outbursts of anti-Semitic violence and those which marked an earlier era: in America and Europe, they are not part of the systems of power. It’s not the rich and powerful who are spray-painting swastikas. On the contrary, it’s those who perceive themselves to be marginalized.

This is an important distinction. Anti-Semitism is real, but it is no longer intrinsic to the systems of oppression that killed Michael Brown. Like it or not, then, most American Jews find ourselves on the side of privilege. We may be “off-white,” as some theorists have proposed, but we’re close enough. If we stand up for the underdog, it will be out of ethics, not self-interest.

Yet this, too, is exactly what core Jewish traditions teach us. Yes, there are texts which speak of Jewish supremacy, of conquering everyone else, and of slavery, misogyny, and the rest. But exhortations of non-oppression of foreigners are more numerous: Leviticus 19:33-34, Deuteronomy 10:19, Deuteronomy 27:9, Jeremiah 22:3. The list goes on.

Most important, I think, is Exodus 22:21: “Do not mistreat or oppress a foreigner, for you were foreigners in Egypt.” Note the past tense. This is a text speaking to a people no longer victimized, but now with the power to victimize others. It is a text for our time.

I cite these texts not for their authority but for their wisdom. They were written at a time in which the Land of Israel was a multiracial society. Jews were in power (sometimes) but non-Jews — “foreigners” — were always present. This is why they, like proscriptions on exploiting the poor, are so easily transposed to contemporary America.

Let’s also not mince words about our choices. Conservatives maintain the systems of oppression I’m talking about. Progressives try to progress beyond them, but conservatives conserve. This isn’t quite partisan politics, but it almost is.

Race? Conservatives fight against the Civil Rights Act, push to deport as many Latinos as possible, eviscerate affirmative action. Worst of all, they successfully disenfranchise millions of people of color across the country by inventing a voter-fraud crisis that does not exist. Conservatives are reinstating Jim Crow as a desperate attempt to maintain power in a multiracial America — and black folks know it.

Class? Despite a wealth gap unknown in the history of our country, Conservatives argue that the wealthiest should pay even less in taxes, while they dismantle the social safety net for everyone else. Our country is quickly resembling a commercial airline, with a small first class full of luxury, a large coach class that’s more cramped than ever, and nothing left in between. And yet Fox News warns of Socialism.

Then there are those values the Bible didn’t foresee: the militarization of civilian police, the surveillance state, “broken window” policies which force cops to get involved in minor offenses. All, not coincidentally, backed by conservatives. (Setting aside Rand Paul’s ascendant libertarianism for now.)

Now, are the protesters on the streets of Ferguson angry because of trickle-down economics? Yes and no. Of course, not on that level of detail. But first and foremost, they are angry. They get intersectionality. They get that the entire system, even under President Obama, seems stacked against those with fewer economic opportunities. Race, class, violence all intersect. They’re angry at the whole system.

As well they should be.

Yet as complex as the “system” is, the just response is simple. Oppress less. Do not conserve structures of oppression; work to counteract them. Choose the policies that favor the widow, the orphan, and the stranger. Sure, it may not be clear which those policies are — but it should be clear which priorities are just.

This is not a utopian program. Inequality is unavoidable, if we also want freedom. Which is why the intersectional Biblical imperative remains operative: to counteract these inevitable structures of oppression as best we can. We will never complete this work. But at least we can stand on the right side of history.

Why Jews Should Care About Ferguson