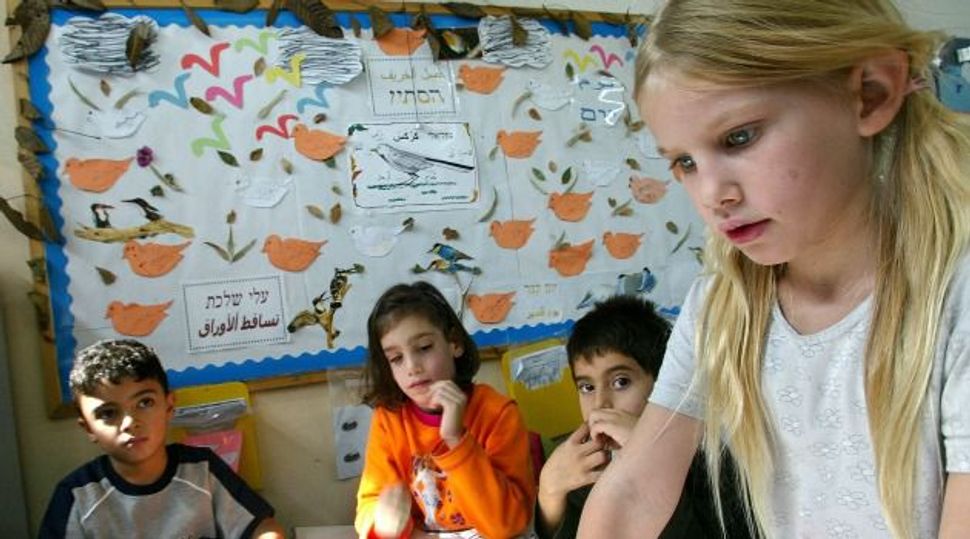 (JTA) — With the new school year nearly upon us, Jewish educational leaders are scrambling to prepare their teachers to discuss this summer’s Gaza War. The most pressing challenge is to design age-appropriate conversations: At which grade level might classroom discussions include potentially frightening topics, such as the wounding of non-combatants, kidnapping of young Israelis and sirens warning of incoming rockets? And how should teachers address the tough issues of civilian casualties in Gaza and the flagrant hostility toward Jews and Israel that has erupted in many parts of the world?

These questions are difficult enough, but are especially freighted with anxiety because they hold the potential to revive stereotypes of Israel that North American Jewish schools have been trying to counter. When Israel was forced to wage three major wars during its first quarter century, its image as an embattled enclave overshadowed everything else about its existence.

In recent decades, though, Jewish schools have endeavored to present a more rounded picture of Israeli life. Without denying the existential challenges facing the Jewish state, teachers have drawn attention to the rich tapestry of Israeli culture — its diverse inhabitants, culinary treats and eclectic music, for example — and, of course, its technological wizardry. School trips to Israel have highlighted the country’s natural beauty and its enjoyable recreational scene, even while exploring the strong connections between the land and the Jewish religion. Educators are understandably loath to resurrect the earlier imagery that simplistically portrayed Israel as a country permanently on war footing.

Responses to the Gaza war require North American Jewish schools to address a second topic that had been pushed to the background in recent years — anti-Semitism. Students in all likelihood are not oblivious of the virulent hostility to Israel and Jews surfacing in the media and on the Web. It’s not clear how prepared schools are to address this issue. In reaction to the overemphasis on the Holocaust from the 1960s through the 1980s, the pendulum of American Jewish fashion has swung away from discourse about anti-Semitism. Now, with the blatantly negative media coverage of Israel’s prosecution of the war and the resurgence of anti-Semitism around the globe, the subject warrants considerably more attention.

The dilemma facing schools in addressing the new anti-Semitism is how to avoid reviving what historian Salo Baron once described as “the lachrymose [tearful] conception of Jewish history.” The saga of the Jews is about a great deal more than persecution. Yet with the barely concealed animosity toward Jews evident in some quarters here in America and abroad, alas, the need to teach young people about the insidious nature of anti-Semitism has become pertinent again.

As they formulate a school response to the war, educators might consider three important lessons derived from “Hearts and Minds,” a recent report on Israel education in North American Jewish schools:

First, one size does not fit all students. Classrooms this September will contain some students who are largely ignorant about the Gaza war and others who have been exposed to it up close. Students who spent part of the summer in Israel undoubtedly will attest to what it was like to run to bomb shelters or sense the fear aroused in Israel’s populace by Hamas tunnels. Teachers will face the daunting task of bridging differences in what students heard from their parents and absorbed elsewhere about the war. The diversity of students and their families adds a considerable measure of complexity to an already challenging situation. All of this places a great responsibility upon teachers to prepare differentiated responses to a broad range of students.

Second, when teaching about Israel, it is imperative to work with students’ minds as well as their hearts. Jewish schools have focused their attention especially on the latter, an understandable approach with younger children. But by their middle school and high school years, students deserve to be exposed not only to the joyous dimensions of the Jewish state, but also to the complexities within Israeli society and outside of it in the tough neighborhood of the Middle East.

And third, teaching about other Jewish communities — their achievements and challenges — does not detract from a connection to Israel but strengthens the ties of students to the Jewish people and also Israel. In some parts of the world, notably in several European countries, Jewish communities are under siege. American Jewish students should not be shielded from these ugly realities. This is the time to teach students about the interconnectedness of all Jews, a lesson that will also strengthen their engagement with Israel and its people.

The Gaza war presents Jewish schools with a teachable moment, a time to explore with their students (in an age-appropriate manner) the asymmetrical struggle in which Israel is engaged and the surge in hatred confronting Jews — including children — in many parts of the world.