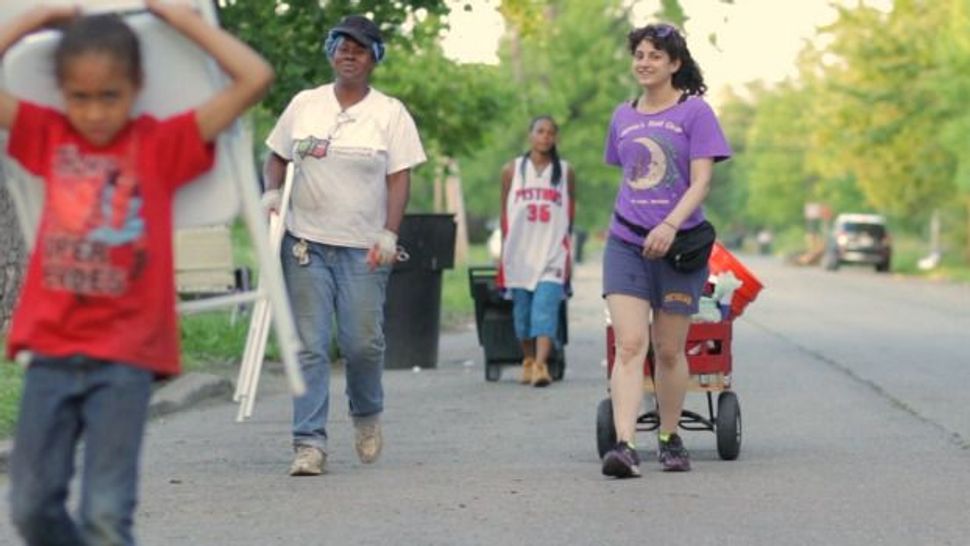 Scars in the Garden from Jewish Daily Forward on Vimeo.

“The Black community was resistant to the Jewish community coming into the neighborhood at first,” explained Chava Karen Knox, an African-American woman who converted to Judaism a couple of years ago.

Knox is referring to the Jewish volunteers who work on a weekly basis in Eden Gardens, a community-run urban farming project in East Detroit.

The project is a collaboration between the local African-American neighborhood association and the Isaac Agree Downtown Synagogue.

Jews journey from their homes in suburbs or more affluent parts of the city to weed rows of leafy collard greens and stake tomato plants. Some say they get far more back than they give in sweat.

“Working in the garden is a place where I often feel the most Jewish. Let my sweat pants be my tefillin,” said Noah Purcell who coordinates the volunteers on part of the synagogue.

Eden Gardens has two ambitious goals: The garden provides much needed nutrition to a low-income neighborhood, where healthy food options are absent. But the project also aims to build a bridge between two estranged communities: Jews who grew up in Michigan’s affluent suburbs after their families joined the ‘white flight’ in the 1950s and African-Americans who live in the city of Detroit, which has been struggling for decades with record numbers of unemployment and foreclosure.

The vegetables in Eden Gardens are soon ready to be harvested. But the trust between Jews and African-Americans is growing at a much slower pace.

“Trust is being built by us showing up every week,” Purcell said. “As we continue to show that we’re not here for a quick photo and a pat on the back. It will continue time to build trust.”