So You Really Think Liberal Zionism Is Dead? 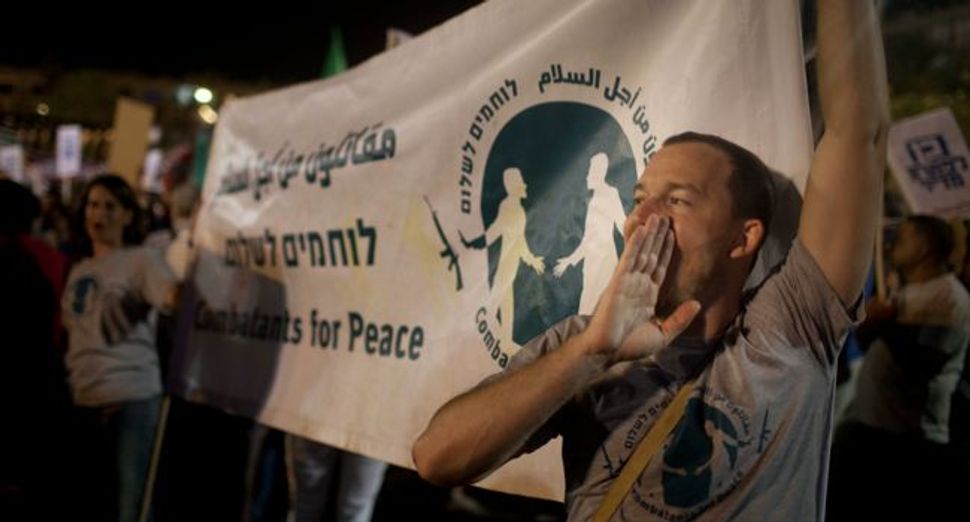 Not Going Quietly: Israelis take part during a demonstration calling for negotiations between Israel and the Palestine on August 16, 2014 in Tel Aviv, Israel. Image by Getty Images

There are many ways to describe this summer’s conflict between Israel and Hamas: accidental, inevitable, horrific, unnecessary, lopsided, tragic. Take your pick — each captures part of the truth. There’s one thing it wasn’t, though, despite what some pundits have been declaring: a death-knell for liberal Zionism. That characterization isn’t just wrong; it’s weirdly off-base.

The way most pundits tell it, the seven-week conflict ended roughly in a draw. Hamas failed to win its non-negotiable demands for a seaport and prisoner release. Israel failed to achieve its essential goal of disarming Hamas. Instead, they dragged themselves to the cease-fire negotiating table like a pair of punch-drunk boxers who’ve beaten each other bloody and are desperate for someone to call it off.

But that analysis, while factually correct, overlooks the most dramatic development: Israel and Hamas are talking to each other. Israel, led by Benjamin Netanyahu, has signed an open-ended agreement with a Palestinian coalition that he’d vowed never to do business with, headed by Mahmoud Abbas’s Palestinian Authority but including Hamas and Islamic Jihad as constituent parties. Bibi’s also agreed, according to reports from the Egyptian capital, to continue negotiating in Cairo starting next month.

As for Hamas, it has accepted, at least for now, its new role as a junior partner in a Palestinian government that recognizes Israel. It’s agreed to suspend attacks on Israel indefinitely. Abbas’s troops will take control of the Rafah crossing between Gaza and Egypt, and by some reports the Gaza side of the crossings into Israel as well. Numerous reports out of Cairo say this is intended as a first step toward reestablishing Abbas’s authority in Gaza, though it’s not clear whether Hamas sees it that way.

In closing the deal, Netanyahu brandished legalistic arguments to avoid bringing the agreement with Hamas to a security cabinet vote that hardline ministers threatened to torpedo. Having vetoed the hardliners’ demand to reoccupy Gaza and crush Hamas, Bibi has apparently cast his lot — for now, at least — with the moderates, Tzipi Livni and Yair Lapid.

The moderates have been pressing Netanyahu for weeks to use the momentum of the war and cease-fire talks to relaunch peace negotiations with the Palestinians in a new framework based on the Arab Peace Initiative. He hasn’t said yes or no. Those who know him best say nothing in his history suggests he’d buy that.

Except that another minister, Yuval Steinitz, who’s usually considered a mouthpiece for Netanyahu, issued a call August 26, while the cease-fire was being finalized, for a national unity government. That’s Israeli political jargon for bringing in the Labor Party. And the Labor Party has made it clear that it won’t join a Netanyahu government unless it’s to pursue peace with the Palestinians.

The Palestinians long ago laid out a bottom-line list of demands before they’d sign a peace agreement. Topping the list is a state with borders “based on” the pre-1967 armistice lines, with mutually agreed land swaps. Netanyahu has repeatedly waved those 1967 lines as a red flag. More than anything else, his hardline stance on that issue — with the closely related question of continued settlement construction — is what critics cite when they pronounce the two-state solution dead. And the death of the two-state solution is item No. 1 on the list of reasons liberal Zionism is supposed to be dead.

One of the foundational documents of the death-of-liberal-Zionism crowd is a 10,000-word article in the July 20 issue of The New Republic by Ben Birnbaum and Amir Tibon that offers a blow-by-blow, inside look at how the Kerry peace initiative failed last April. Everybody who’s read it has their favorite bad guy, but one critical fact has gone largely unnoticed: Late last January, Bibi okayed a Kerry “framework” document stating that the “new secure and recognized border between Israel and Palestine will be negotiated based on the 1967 lines with mutual agreed swaps.” That’s unprecedented.

Numerous details took forever to hammer out. Bibi was afraid he’d lose his coalition if he gave away too much. The Knesset would approve a peace agreement by a comfortable majority, but a hardline minority dominates the Netanyahu government, which must approve a deal before it reaches the Knesset. Bringing in the Labor Party would solve that problem.

Abbas had his own problems. His allies and his public worried he’d settle for too little. The backing of the Arab League, particularly Saudi Arabia, is considered crucial to give the Palestinians confidence that they’re not alone. But the Saudis have been infuriatingly slow to show any active, visible support for peace beyond the peace initiative itself, issued 12 years ago.

Until August 21, that is. That’s when the Saudi foreign minister, Prince Saud al-Faisal, one of the most powerful men in the kingdom and long a hardliner on Israel, publicly declared that Saudi Arabia, “as a leading Islamic country,” is “ready to make sacrifices in peace negotiations” and “encourages President Abbas to follow the same policy.”

None of this necessarily means that peace is about to break out. Too many negotiations have ended in failure for anyone to speak confidently. But it’s just as wrong to state confidently that the peace process is dead.

It’s important to recall that the peace process isn’t the only issue on liberal Zionism’s agenda. Liberals worry about the quality of Israeli democracy. They hear disturbing reports about anti-democratic legislation, intolerance of religious pluralism, mistreatment of Arab Israeli citizens and more. That’s not the Israel they believe in, and it shouldn’t be. In fact, many of the worst developments don’t happen in the end — often thanks to Diaspora liberal protests. Reform Judaism is making slow progress in Israel. Much of the recent anti-democratic legislation was blocked by the courts or failed in Knesset. There are many battles still to be fought. But as shown in last April’s “Jewish and Democratic” report from the Jewish People Policy Institute, liberal protest has become a mainstream Diaspora consensus.

So who thinks liberal Zionism is dead? First are the casually engaged liberals who hear about the latest right-wing Israeli antic, register their complaint and don’t stick around to hear whether their protest succeeded.

Second are Diaspora liberals, separated by an ocean from Israeli reality, who view war through the lens of Vietnam and Iraq, not Beaufort and Sderot. Guns and bloodshed make them squeamish. Often they don’t understand the reality of life in Israel. At other times they understand all too well — as in the widespread reactions, scarcely echoed in Israel, to the horrific Palestinian death toll in Gaza this summer.

Third are those like the author of the much-discussed August 24 New York Times essay, British scholar Antony Lerman, who don’t approve of Jewish nationalism and look for any opportunity to discredit it. A crisis like the Gaza war, highlighting the real and legitimate gulf between liberal Diaspora Zionists and their counterparts in Israel, gives the anti-Zionists an I-told-you-so moment. But it’s only a moment.

Ultimately, most Jews around the world will remain liberal and most will continue to care about Israel because they are Jews and Israel is the Jewish state. They won’t always understand it. Sometimes their perspective will grate. At other times it will stimulate. That’s how families work.

So You Really Think Liberal Zionism Is Dead?