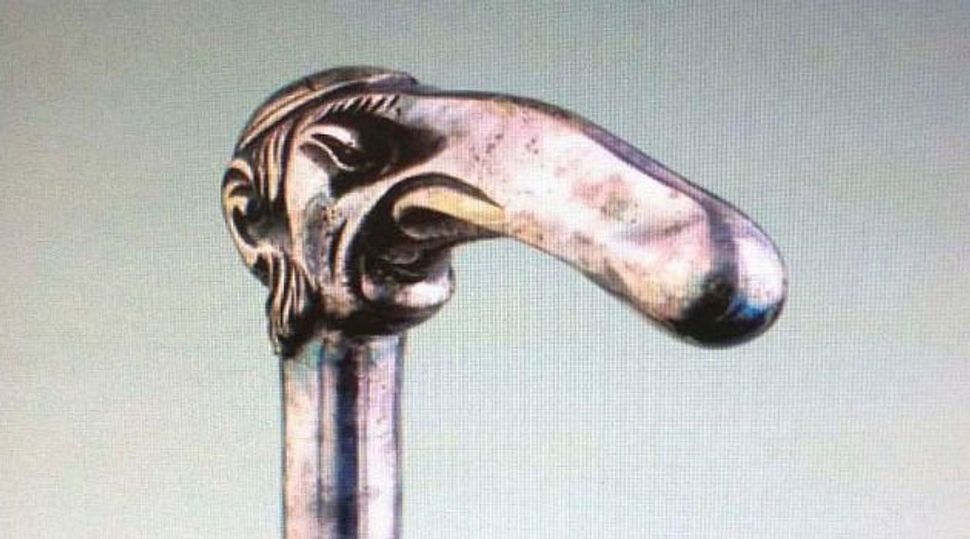 Image by Courtesy of Jewish Museum in Vienna

The top floor of the Jüdisches Museum Wien, the Jewish Museum in Vienna, is a storehouse of fancy stuff: shiny breastplates and bulbuous ornaments for the sacred Torah, ritual objects for the home, elaborately decorated in silver and gold and jewels, collected and donated by wealthy men reflecting the richness of Austrian Jewish life, and now proudly preserved for all to see. But tucked in the corner is a collection of a different sort.

There is what looks like a piggy bank comprised of a male figure with a twisted, ugly face and a protuding belly, hands grasping to open a scruffy jacket.

Nearby, a devil-like figure, naked, with horns jutting from its hair, its belly and genitals sticking out in grotesque fashion.

A large ashtray with a complicated design of an exaggerated head, positioned so that you could crush a cigarette inside its skull.

And, perhaps most striking, a clutch of 19th-century walking sticks, with wood made smooth by use and topped by handles carved in the shape of male heads with large ears, beady eyes and drooping, oversized noses.

These objects, figurines, plates, cups, mugs, pitchers — some just an inch or 2 tall, some nearly a foot high — are part of a collection that is shocking, riveting and disgusting. I viewed it in August, well into the most challenging summer I can remember in a long time, as the fighting between Israel and Hamas left thousands dead, and an unsettling wave of anti-Semitism surged through Europe, washing over even onto these shores.

But the message conveyed by this unusual and troubling collection of anti-Semitic memorabilia in Vienna’s Jewish museum is not the one you might expect. You cannot look at it as a simple reminder of deeply embedded Jew-hatred in a sophisticated, cultured nation, shrug, and conclude: They always hated us. They always will. We should do what we need to do.

It’s more complicated than that, because all the figures are placed so that their backs are turned toward the visitor. Expressing what — Rejection? Ambivalence? Distance? The end of a long, prejudicial era?

And yet you can see their faces and the rest of their bodies because the vitrine is lined with mirrors. That means, of course, that as you stare at this bizarre historical representation of age-old hatred, you see your own image, too.

Who would create such items? Use them? Collect them?

We know the answer to the last question: Martin Schlaff, 61, considered one of the richest men in Austria and certainly one of the most complicated. Raised ultra-Orthodox — his father was a Bobov Hasid who survived the Holocaust to become a wealthy businessman — Schlaff’s name has been associated with, among other juicy items, the bribery case against Ariel Sharon’s sons, a now-defunct casino in Jericho built by a company partially owned by Yasser Arafat, the still-inconclusive death of his New York business partner, and what was said to be the largest divorce settlement in Europe when he split from his second wife. (He has since remarried.)

In a video interview with the museum’s director, Danielle Spera, in German with English subtitles and played in a continual loop next to his exhibit, Schlaff explains what drew him to collect 5,000 objects illustrating the very worst stereotypes of his fellow Jews. Many years ago, when visiting an art dealer in Jerusalem, Schlaff said that he saw an anti-Semitic postcard from Carlsbad — depicting not its beautiful forests but “a portrait of Jews that look just like caricatures from ‘Der Sturmer.’ I asked the collector about the origins of this postcard. His answer was that when he travelled to Eastern Europe, he would find at every second antiques shop something similar, but hidden under the counter of the dealers…He was sure that there were a couple of old Nazis who would buy this stuff.”

The collector showed Schlaff the walking stick, the ashtray.

“Somehow, I immediately had the desire to collect these things myself,” he says. “I cannot say why, perhaps I did not want the others to collect [them], but it was also part of my trying to come to terms with my family history.”

Schlaff donated the full collection to the museum in 1993, but only a few items were ever shown to the public until Spera took office in 2010. “As it is also a (disturbing) part of the Austrian-Jewish history, I decided to put it on display but in a different way,” she told me in an email.

The objects date from 1490 to 1946, and from all over the world. This last point is an important one to Schlaff, as he says in the video:

“If you study the collection closely, you’ll see that there are objects from South America, North America, from France, from England. One must distinguish very thoroughly between anti-Semitism, which was widely socially accepted up to the early 20th century, and the Holocaust. Anti-Semitism was found everywhere, but the Holocaust is a German-Austrian specific feature.”

Spera credits a curator at the museum, Gabriele Kohlbauer, with the idea to position The Schlaff Collection backwards, not only to indicate that the objects are different from other displays but to force “the visitor to watch himself.”

It is an uncomfortable experience. I found myself grimacing at some of the grosser depictions, wondering who in their right mind would want to own such ugly figures and broadcast such prejudices. It speaks to a pathology that at first seems distant, mysterious — an inversion of the collector’s quest to gather objects of beauty, turning art into something that is denigrating instead of elevating.

But there are deeper meanings here. For one, a non-Jew staring into this grotesque scene may see himself in it, too, and may see how he has absorbed these caricatures unconsciously, expecting Jews to be conniving or dirty or over-sexualized. Truth is, don’t we all do that? We see the black hats and the long beards and the wild gesticulations and allow our minds to stereotype in the most unflattering and perhaps inaccurate way possible.

This lamentable impulse is directed not only to Jews. Viewing this exhibit made me conscious of how much racial, ethnic and gender stereotyping has existed in popular culture, from black face minstrels to anatomically-impossible depictions of sexed-up women.

Spera asks Schlaff whether he thought that displaying these objects, especially in a Jewish museum, will only further inflame hatred. “No one will become an anti-Semite from looking at the ashtray,” Schlaff insists. But it should make us all more aware of how readily history has used the Jews as a repository of fear and prejudice, and to remind us Jews not to do the same to others.