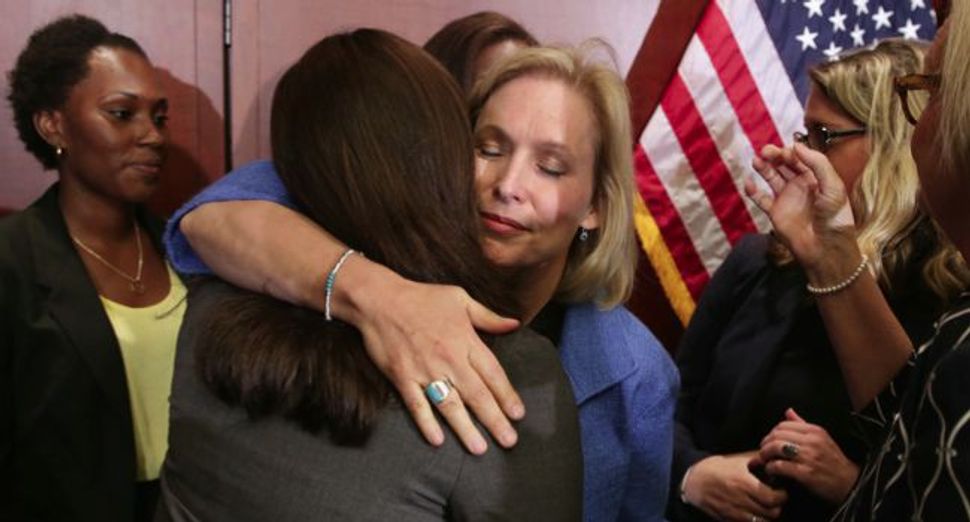 Looking for Justice: Senator Kristen Gillibrand embraces End Rape on Campus co-founder Andrea Pino, a survivor of sexual assault at the University of North Carolina, during a news conference in July about new legislation aimed at curbing sexual assaults on college campuses. Image by Getty Images

Imagine we learned that 20% of Jews who attend college will experience an anti-Semitic assault by the time they are seniors. We’re talking about nice Jewish girls and boys who are just looking to have a regular college experience, including late-night trips home from the library and from drinking a little too much with friends on the weekend. Sometimes they know the assailant and sometimes they don’t. Sometimes things are hazy as they begin, but by the end it is clear that the Jew was violated.

What would we do about this?

Would we tell Jews not to walk around alone at night? Best to develop a buddy system rather than take the risk that is moving around on one’s own.

Or would we tell them not to drink, because the vast majority of assault cases happen to intoxicated Jews? Also, when Jews drink they are more likely to feel a sense of guilt and shame, as they have reason to question whether they had somehow asked for it; this makes them less likely to prosecute.

Or maybe we’d tell them to downplay their Jewiness. Straighten their hair, fix their noses and absolutely zero talk of summers at Camp Ramah. Oh, and best to avoid all displays of wealth, and heck, even asking a waitress if they can sit at a better table, because when they showcase their Jewishness like that, they are just asking for it.

Best of all, maybe a bunch of guys in a lab will come up with an easy way to detect whether or not they are fraternizing with anti-Semites. Perhaps a nail polish that will allow them to detect sedative drugs that anti-Semites often slip in Jews’ drinks to make it easier to take advantage of them. Just one swirl in your drink, Jews, and you can quickly determine whether those new “friends” are planning on assaulting you later.

We wouldn’t stand for any of this right?

We would be shocked, shocked by everyone’s insistence that we are ultimately responsible for protecting ourselves. We would demand that, instead, the energy went into fighting anti-Semitism. We would call for more public education, for all ages and all sorts of people, explaining why it is simply not okay to assault Jews just because they feel like it. We would insist that we don’t owe anything to our assailants and the institutions that support them.

Well, this is exactly how women feel about our current discussion on sexual assault. Everything I listed above is a real suggestion or solution for women on how to avoid rape. It sounds ridiculous in another context, right?

Listen, I believe that those behind these ideas mean well. And I believe that they might work to prevent assault. Frankly, if I had a college-bound daughter I might tell her to do the same, in the privacy of our home. Because as things stand now, with those guilty of sexual assault getting away with it, often with the help of universities, it can’t hurt for young women to take extra precautions on their own. (Just this August a male senior at Stanford University was quoted in Bloomberg comparing a drunk woman to an unlocked bike, because both involve someone taking on “undue risk.”)

But then I would remind her that it isn’t fair or right and that what is really in her best interest is to fight against the larger culture that leads to assault. I’d tell her that men’s urges are absolutely controllable, and that there is something we can do to make sure the small percentage of men who rape get better at controlling theirs.

Speaking with NPR, anthropologist Peggy Reeves Sanday, author of “Fraternity Gang Rape: Sex, Brotherhood, and Privilege on Campus,” explained that we need to seriously re-examine the “U.S. cultural privileging of male sexual aggression on the grounds that because it is ‘natural’ it cannot be questioned. Anthropological research and fieldwork… dispute this assumption. There is wide variability in sexual customs ranging from societies in which sexual aggression is rare to those in which it is common.”

Sanday explained that sexual aggression is often related to societies that emphasize “male toughness and competition and a low respect for women as citizens. In the rape-free societies I studied, rape is punished and both sexes hold exalted positions in public decision-making and both are integrated and equal in the affairs of everyday life.”

So there’s work to do. And there is reason to be hopeful, as campuses across the country are starting to make meaningful changes.

In the meantime, I say let’s follow Golda Meir’s suggestion when she was informed of a violent rape epidemic in Israel and someone suggested that the nation’s women go under curfew until they have found the assailants: “Men are committing the rapes. Let them be put under curfew.”