Modesty Is the New Black 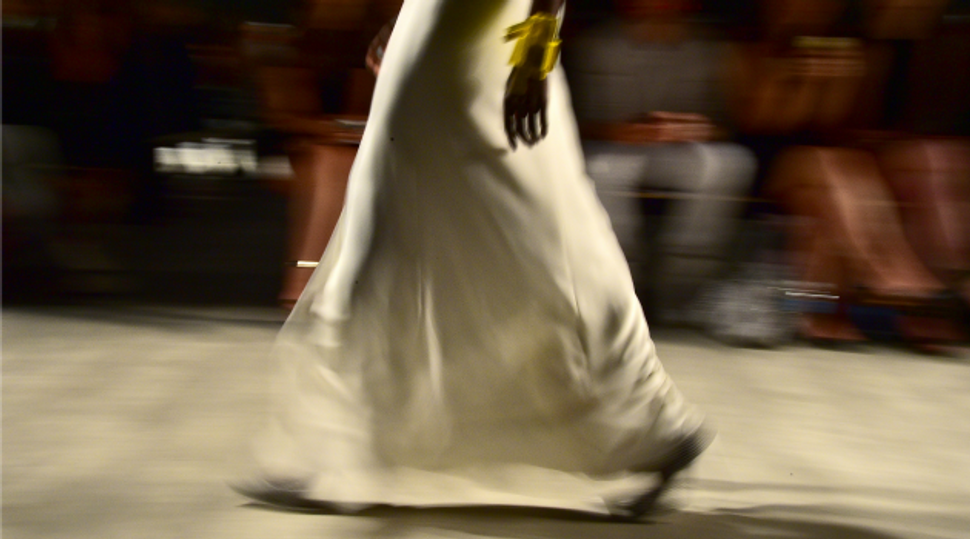 Covered Up: A model walks the runway at the Angel Sanchez fashion show during New York Fashion Week. Image by Getty Images

Fashion is a tricky one for feminists. There are two poles to navigate, each with deep roots in thousands of years of patriarchy, and few of us make it through uncompromised. On one side we feel the pressure to dress sexy and look attractive, and on the other, a pressure to cover-up, because it is our job to prevent arousal in men. In their purest forms, both reduce women down to their bodies.

In the 1960s women began resisting the idea that they should have to hide their bodies or their sexuality all because some men can’t handle it. These miniskirt feminists, which included women like Gloria Steinem and Helen Gurley Brown, saw sexual liberation as part and parcel of women’s liberation and weren’t afraid to show a little leg to prove it. Now we are seeing a similar effort among nonconforming women, but this time the skirts are long.

From the perennially chic Barneys New York, to cutting edge boutiques in Soho, and even fast fashion chains like Zara, this season racks are being filled with billowy dresses, oversized jackets and ankle-skimming skirts. Celebrity fans include music sensation Lorde and the former actresses and fashion designers the Olsen twins. Yes, the look of the moment is a modest one, a style that is unlikely to make your dad or your rabbi blush.

Except, here’s the thing, this isn’t about your dad or your rabbi. This is about women coming to modesty on our own, a for us, by us approach to covering up and looking fashionable while we are at it. It is a modesty stripped of dowdiness and notions of purity and converted into a status symbol. Women could do a lot worse.

This latest trend sprung out of a certain intellectual chic that has crept up in creative neighborhoods. Jennifer Mankins, owner of Brooklyn-chain Bird, which [the New York Times]( (http://www.nytimes.com/2012/12/27/fashion/jennifer-mankins-and-the-brooklyn-aesthetic.html?pagewanted=all ‘the New York Times’) called the curator of this “subversive” look, told the paper that the goal is to be “interesting as opposed to being really sexy, with the really high heels and tight dresses.”

Turns out there’s something to modesty. Generously cut clothing is more comfortable, forgiving, and takes the focus off of women’s bodies, which is a good thing. In this age of skintight bondage dresses, made possible by starvation juice cleanses, spray tans, and strict workout regimes, many are bound to find the new roomier style liberating.

There is also an element of female camaraderie to the new modesty. A result of being long-valued by their bodies, women measure themselves against one another’s looks; “The thinner is the winner” is a horrible phrase that nobody takes seriously, except when they do. The less clothes are about showcasing how slender and toned a women is, the less they will experience this pressure.

Yes. I know. Women who dress modest for religious reasons are furiously nodding right now, because they have known this all along. Indeed, many of them have long emphasized the ways in which modest dressing is an opportunity rather than a restriction, a chance to rise above objectification and be taken more seriously as a result. And these days, more and more observant women are finding ways to meld their love of fashion with religious laws, proving that the two are not mutually exclusive.

Still there is a distinction between what downtown’s hippest are doing and what these religious women do, and it is that for the former, it is truly a choice, and no authority, male authority, will ever degrade them for it. That doesn’t necessarily make it better than religious modesty, but it is important to note the different systems of cause and effect, behavior and rewards, at play.

Most importantly, the new modesty isn’t about a woman’s sexuality. There is no ideological framework behind, no implicit judgements about what a women should and shouldn’t do with her body once that tent dress comes off or what her relationship status should be when she does it.

It’s also not about establishing hierarchies. Many of the designers behind such looks also include crop-tops and short-shorts in their seasonal offerings. (Though from what I gather about their aesthetic, I doubt they think you should pair them together.) So really this is just about broadening fashion’s vocabulary, giving women more options within the realm of nice fabrics and high design.

“Subtlety is a word we use all the time. It’s about the clothes wearing you. That’s quite hard to find in fashion,” Mary Kate Olsen said in the August edition of fashion magazine Harper’s Bazaar. “We always thought the sexiest thing for a woman was just a T-shirt and jeans. That’s been our approach from the start. I think modesty is very sexy.”

Modesty Is the New Black