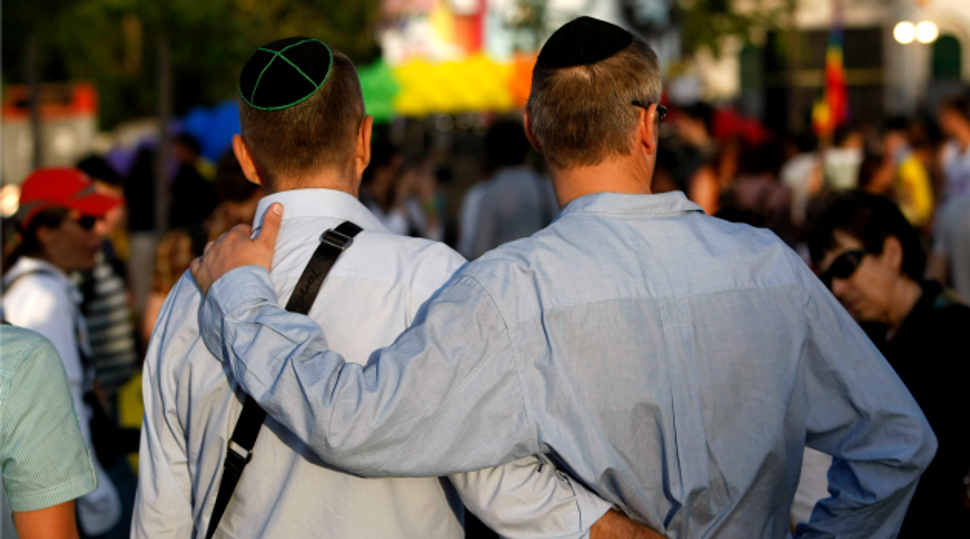 “Mazel tov on your engagement! Oops — actually, strike that. No mazel tov for you.”

That’s essentially the message Israeli yeshiva Ma’ale Gilboa conveyed to one of its former students and his partner this week, upon realizing that the couple consisted of two gay men.

On the public notices section of its website, the national-religious yeshiva posted: “Congratulations to Uri Erman on his engagement to Daniel Jonas.” But it soon retracted the statement, chalking it up to an error on the part of the website’s student editor. “This is a mistake; we thought [Daniel] was a woman rather than a man.”

As if that wasn’t painful enough, here’s what Jonas (who heads the gay religious organization Havruta) posted to his personal Facebook profile on Sunday, before he saw the school’s retraction: “Without getting into nuance, since we actually got married and not engaged, I take off my hat to them! It’s really exciting to see something like this on the official website of a yeshiva.”

His post got over 100 likes, 20 shares and several comments noting (in Hebrew) how “impressive” and “amazing” and “heartening” the yeshiva’s statement was.

Too bad it couldn’t last.

Truth be told, I’m not surprised it didn’t last — and not for the reason you might think (homophobia). Ma’ale Gilboa may be an Orthodox religious institution, but it’s also super left-wing. I know because I attended its sister yeshiva, Midreshet Ein Hanatziv, located just a quick hitchhike away in Israel’s northern Beit She’an area. There was lots of crossover between the two schools: I ate in Ma’ale Gilboa’s cafeteria, attended its lectures and studied with its teachers. And I can tell you that much of the staff (to say nothing of the student body) is very queer-positive. So much so, that I highly doubt the yeshiva’s retraction was motivated by homophobic sentiment on the part of higher-ups.

What, then? The likeliest explanation, in my opinion, is that Ma’ale Gilboa just can’t afford — politically speaking — to be seen as the sort of school that would extend an official “mazel tov” to a gay couple. The yeshiva is already fighting the liberal fight on a number of fronts: embracing academic tools for the study of religious texts; promoting strong interfaith relations; and speaking out against hardliner rabbis on everything from Jewish women’s issues to Palestinian issues. Given that homosexuality is still a lightning-rod topic for Israel’s rightward-drifting religious society, I imagine Ma’ale Gilboa is wary of losing any more legitimacy over it.

Which, if it’s true, might be even sadder. It says a lot about the state of religious politics in Israel when even a school like Ma’ale Gilboa won’t let a congratulatory announcement stay up — even after it’s already been released into the public domain, and even when retracting it would mean a blow to kavod habriyot, the Jewish principle that tells us to break certain religious rules if following them would mean a loss of human dignity.