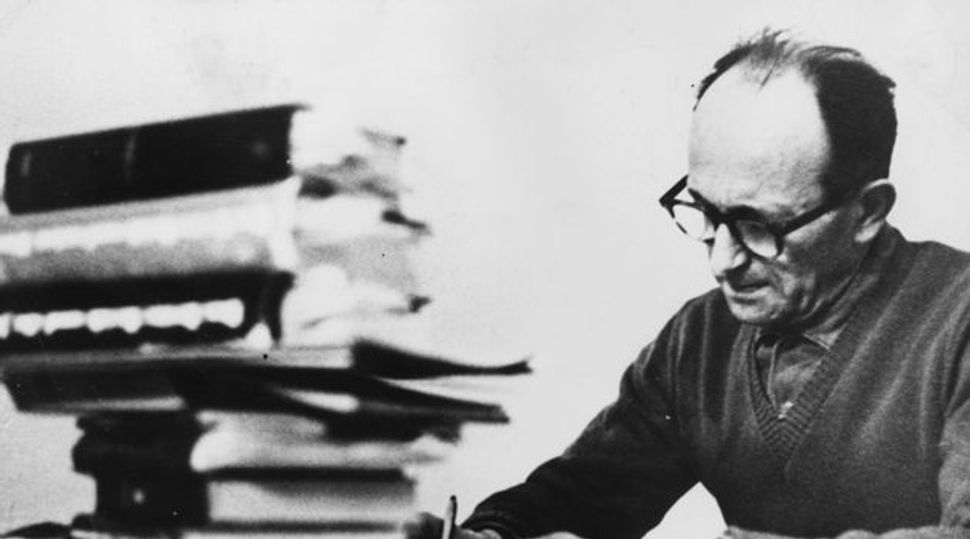 Unthinking: Adolf Eichmann prepares for his trial in his Israeli cell in 1961. Image by Getty Images

The idea that evil could be “banal” still shocks us. It’s much scarier to consider that genocide could be carried out unthinkingly by the most vacuous of bureaucrats and not by intrinsically bad people acting with bad intent. This new moral category was Hannah Arendt’s now infamous reaction to witnessing the 1961 trial of Adolf Eichmann for the crime of helping to carry out the Holocaust. Her New Yorker dispatches, turned into a 1963 book called “Eichmann in Jerusalem,” provoked an enormous backlash from which Arendt’s reputation never really recovered. Critics assumed that by trying to understand Eichmann’s particular kind of evil, Arendt was somehow excusing his actions.

Though the question of whether evil can really be “banal” has been debated in the decades since, Arendt did seem to have the last word on Eichmann himself, shaping our understanding of the man in an enduring way. But a new book by Bettina Stangneth, an independent German philosopher living in Hamburg, has just completely overturned conventional wisdom about the man Arendt observed in that glass box in Jerusalem.

Stangneth’s book, “Eichmann Before Jerusalem,” reveals Eichmann as a hugely successful liar, a performer, who managed to convince Arendt and many others that he was essentially devoid of any motive beyond career advancement, someone just following orders. But Stangneth has uncovered strong evidence in the writings of Eichmann before his capture in Argentina that prove him to have been deeply anti-Semitic and committed to the Nazi’s race war, an ideologue who understood exactly what he was doing. It’s a damning new portrait that will impact not only our thinking about Eichmann and Arendt, but also the nature of evil itself.

Gal Beckerman: Do you see your book as being in a dialogue with Arendt ?

Bettina Stangneth: Every essay about Eichmann after 1963 has been a dialogue with Hannah Arendt. Not always with enough respect, of course. Arendt was the only observer of the Eichmann trial in 1961 in Jerusalem who saw the fundamental ethical problems it presented. Her discovery of an important concept of evil — the banality of evil — is indispensable for discussions about modern crimes. Nobody should believe that there could be a step back from Arendt’s insight. That does not mean that we have to “defend” her; someone like Arendt does not need priests. We have to think with her, using the weapons she gave us and with the same aim she had: to understand. 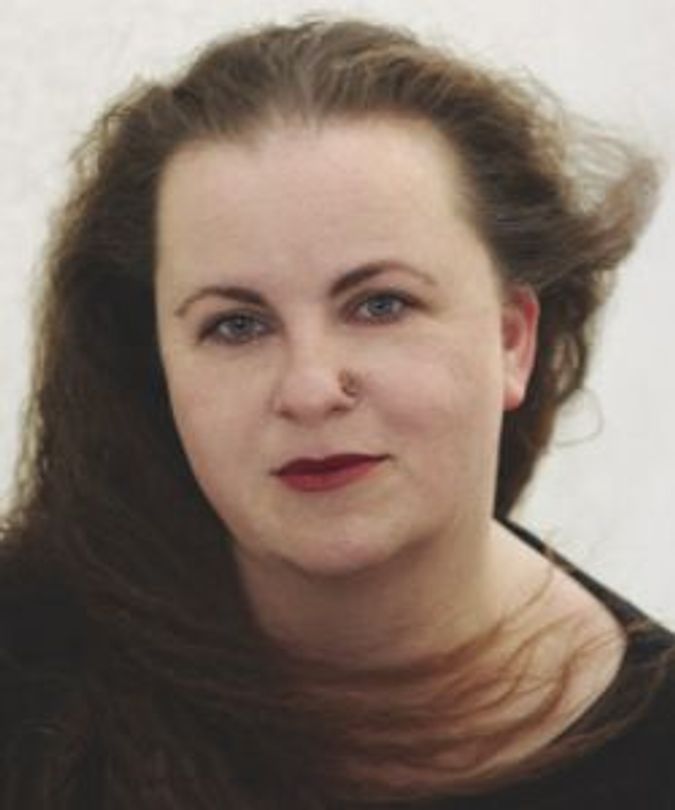 But her conclusions about Eichmann’s evil and yours seem diametrically opposed. So where do they intersect?

Of course, we know Arendt’s characterization of Eichmann: “Except for an extraordinary diligence in looking out for his personal advancement, he had no motives at all. And this diligence in itself was in no way criminal….” She could not find “a sign of firm ideological convictions or of specific evil motives.” Today we know that Eichmann had, without any doubts, a firm ideological conviction and criminal motives. Who would ever deny that the clear decision to kill millions of people, lectures about anti-Semitism to his colleagues and the creation of institutions with no other aim than to realize mass murders are anything else but criminal and evil motives! What makes the Eichmann-phenomenon so disturbing is his ability to use the “extraordinary diligence” of other people to realize his murderous aims. Eichmann himself understood that the “inability to think” was something very useful. Without it, states’ crimes would never be possible, because you would never find enough convinced helpers. Eichmann understood that he had to instrumentalize normal men and women. You could say Eichmann himself understood the “banality of evil” only too well.

There is no doubt: It is possible to have people who act as cogs in the wheels of a murderous machine, who only seek a normal life, a little bit of comfort and career, and do not ask about the bigger picture. But a murderous machine needs more than cogs; it needs a few engineers, too. In this case, after the crimes, the engineer had no problem pretending to be a cog, hiding behind his own colleagues.

Why do you think Arendt was so taken in by Eichmann’s performance on the stand? Does it tell us something about her?

If it tells us something about her, it tells us something about nearly every spectator of the trial in 1961. It is a legend that only she was misled by Eichmann. But we have forgotten the other reports about the trial. Example? Alfred Wolfmann, the correspondent from Germany’s most important Jewish newspaper, Allgemeine Jüdische Wochenzeitung, described him as a “pathetic weakling.” Joachim Schwelien wrote in Frankfurter Allgemeine Zeitung that Eichmann was nothing more than a “Hanswurst” [a buffoonish character from German folklore]. And everybody agreed. Some years later, Arendt only repeated these words, and people were shocked. In 1961 the astonishment about Eichmann was that he seemed to be a man without his own thoughts and convictions. This was common sense. When Arendt restated this common experience in 1963, it provoked a scandal. This tells us something about Hannah Arendt: She was not willing to deny the public astonishment of the year 1961 — she wanted to understand it.

The smoking gun for uncovering Eichmann’s true attitudes seems to have been the Sassen interviews and Eichmann’s manuscripts from Argentina, the so-called “Argentinean Papers.” Can you explain what these were and why they proved so important to your work?

Since 1960, when Life magazine published “Eichmann’s memoirs,” everybody has known that there are statements from Adolf Eichmann made in his Argentinian exile. But it was extremely difficult to figure out their real nature. Eichmann and his friends spread a very clever camouflage: One day in the 1950s, they told the world, a journalist and a stranger met in a pub in Buenos Aires, and over too many drinks the stranger began to tell his story…. As believable as this tale seamed to be, it was pure nonsense.

The Argentinean Papers are the testimony of a large project conducted by a group of Nazis to bring the idea of national socialism back to power. Eichmann was a part of this group, consulted because of his firsthand knowledge of the “Jewish question.” The alleged “Sassen Interview” is the protocol of their meetings. Members of the group wrote their own drafts for discussions, and Eichmann planned to publish his own book together with Willem Sassen, who was the conductor of this perverse historian’s club. So the Argentinean Papers shows us both the portrait of a radical Nazi group with incredible international connections, and Eichmann’s thoughts and eloquence outside the glass box in Jerusalem.

The book returns the focus to Eichmann himself instead of seeing him as a way to discuss human morality (as Arendt did). Was this part of your motivation?

Hannah Arendt’s “Eichmann in Jerusalem” is, first of all, an excellent report of the trial. But Arendt was a philosopher, and philosophers are not able to write about anything without philosophical interest. Some called it a kind of weakness or a mistake. I think it’s the best way to write books.

It was not my aim to write about Eichmann as I started to read about him around 2000. I was sure that we knew all that was knowable about him, and I agreed with Arendt’s opinion without any doubt. My main subjects were (and are) the evil and the lie, and Eichmann seemed to me the best example to explain a special way to understand how to work with unreliable sources. So I read every available publication and document about him. But then so many unused sources came to light that it became impossible not to think about Eichmann himself again. With a philosophical interest, of course.

Was it strange to get so close to an understanding of Eichmann’s thoughts and motives, peering underneath his constructed mask?

As a philosopher you learn to think with the great thinkers: Aristotle, Immanuel Kant, Hannah Arendt. They are teachers in the best sense: reliable, fair, transparent. You can trust them without any danger. And this is important, because thinking is not a subject like any other. You cannot leave thoughts in a laboratory, go home and live your life. You have to let them into your own thoughts to study them.

Thinking with philosophers is pure joy, a dialogue in friendship and respect. But thinking with someone like Eichmann is totally different: You have to come close to the most dangerous thoughts and find a way to keep yourself uninfected. But in my opinion, this is the main task of philosophy: to make us able to examine dangerous thoughts of dangerous people. Perhaps you could call “Eichmann Before Jerusalem” a showdown of philosophical power?