Climate Change — A Hole Too Big To Ignore 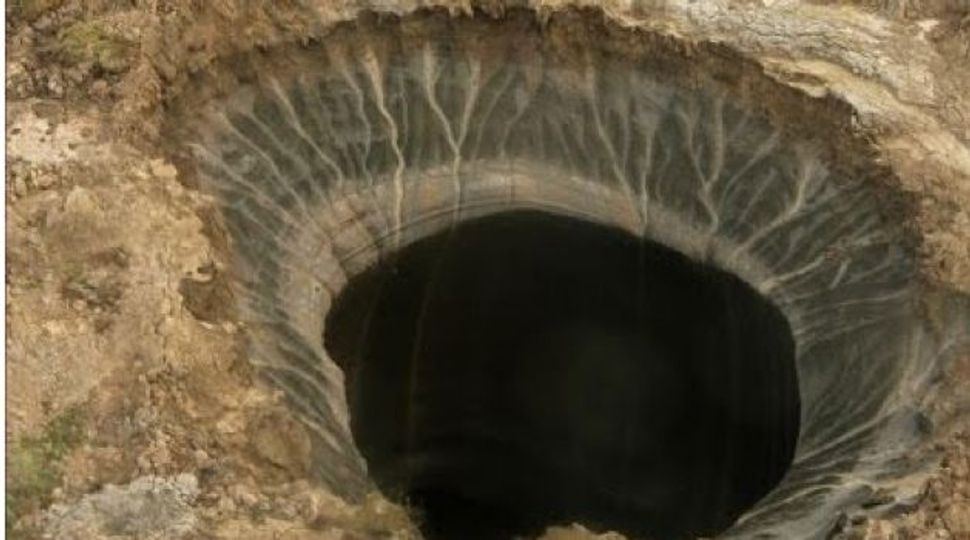 Bottomless: One of the giant craters that appeared in Northern Siberia this summer, a result of global warming. Image by Wikipedia

Yes, it was a rough summer, what with racial tension in Missouri and an army of Spanish-speaking children invading our southern border, plus threats of a new world war in Ukraine and barbaric jihadis marching across Iraq, decapitating journalists and massacring religious minorities. Not to mention the deadly, dispiriting 50-day war between Israel and Hamas. And don’t even talk to me about Ebola.

With all that going on, you might have missed the really terrifying news. It seems scientists discovered these three gigantic holes in the ground in remote northern Siberia.

The first hole, perfectly round, 262 feet in diameter and seemingly bottomless, was spotted July 15 by helicopter pilots. Scientists were stumped. On July 29 two more holes were found. Theories ranged from giant meteorites to space aliens.

Finally, over the weekend of August 1, Russian scientists came up with what looks like the answer. It appears the holes result from the warming of the earth. The unusually hot summers of 2012 and 2013 in that region caused a thawing of the permafrost — permanently frozen ground near the poles — for the first time in millennia. The softened ground allowed the explosive escape of air that had been trapped below under mounting pressure for thousands of years. The pressure was produced by prehistoric plant life decaying deep underground and generating gases.

Why should we care? The problem is that decaying organic matter releases high levels of methane, a carbon-based greenhouse gas that’s about 20 times more potent than carbon dioxide. Tests of the air at the bottom of the first crater found methane content of 9.6%. That’s roughly 54,000 times higher than normal air (normal is 0.000179% methane).

Three holes in Siberia aren’t the end of the world, of course. Not by themselves. But they’re part of an alarming pattern of methane leaks discovered recently that look like products of climate change.

The leaks are a perfect example of what’s called a climate change feedback loop — a vicious circle in which warming produces an effect that in turn causes more warming. Another feedback loop is the melting of the Antarctic ice sheet. It’s adding huge quantities of water to the Southern Ocean, raising the sea level. Seawater is now spilling over the frozen continent’s coastal ridge and into the bowl-like interior, where it pools and melts the ice sheet from below. Scientists say the process is now irreversible and will raise sea levels around the globe by at least 10 feet within a century, threatening major coastal cities like New York and Shanghai. Vast areas of Asian cropland will be drowned, dislocating populations and hurting global food supplies. We can prepare, adapt, resettle refugees, develop alternative food sources, but we can’t stop it.

We don’t have to wait a century to see the impact of global warming. A flood of scientific reports in the past few months describes negative effects already visible. Some reports reflect new research. Others represent a new willingness among scientists to draw connections between cause and effect.

Until recently, most scientists were reluctant to link global warming to specific phenomena, like individual storms, droughts, floods. That’s changing as alarm mounts over persistent climate skepticism and the inability of the political system to take action. Scientists increasingly feel that the hints typically found in academic papers leave too many openings for deniers to spread the false impression that the problem is unimportant, or nonexistent.

Consequently, they’re now spelling out connections that were once left implicit. Important studies published this summer show how climate change, by warming ocean surfaces and disrupting wind patterns, is helping to produce extreme weather events, the sort that used to be rare, on a regular basis — “once-in-a-century storms every other year,” as New York’s Governor Andrew Cuomo put it after Hurricane Sandy. Results include crippling drought in California, monster blizzards in the Midwest and Southeast, hurricanes and tornadoes of growing severity (though not greater frequency), plus torrential rainfall and biblical-scale flooding in numerous regions. They’ve become too frequent to ignore or explain away.

Some crises don’t need scientists to identify them. Sea level rise is regularly bringing flooding during high tides from Virginia to South Florida, causing millions of dollars in damage to buildings and roads that must be repaired over and over. Some communities have been abandoned as uninhabitable. Out west, fire season starts earlier, lasts longer and spreads farther.

Absorption of carbon dioxide is acidifying the oceans, killing off coral reefs and shellfish and threatening other species. Shifting rainfall patterns are causing worldwide cotton shortages, forcing a scramble for alternative textiles. And it’s now well documented that unusual droughts and flooding in grain-producing regions created food shortages throughout the Middle East three years ago that led to unrest and helped spark the Arab Spring and its sorry aftermath.

Much of this is summed up in an unusually blunt report that will be submitted to the United Nations in November by the Intergovernmental Panel on Climate Change. The report synthesizes three other reports issued over the past year that reviewed the science of climate change, the detectable impact and options for slowing or adapting to it.

The Pentagon is preparing a long-term plan to deal with the consequences of climate change — “threat multipliers” in military jargon — ranging from flooding of naval bases to regional wars and terrorism sparked by competition for disappearing resources. Around the country, hundreds of cities and town have begun their own preparations, planting trees for shade, raising bridges and upgrading sewage plants.

Many cities are masking their preparations in euphemisms like “resilience” to avoid partisan clashes. Conservative dismissal of climate change often makes it politically risky to prepare for it. North Carolina’s legislature actually outlawed consideration of sea-level rise in coastline planning. Nationally, Republican opposition makes it all but impossible to mount a serious effort to slow the warming process. And America’s refusal to act gives third-world polluters like India an excuse to dodge tough decisions.

Right-wing efforts to debunk the science would be comical if they weren’t so dangerous. A recent Wall Street Journal essay spent 1,200 words arguing over temperature fluctuations — the deniers’ favorite issue — as though thousands of vetted studies hadn’t documented everything from glacier melt to rainfall, coral reef death and — well, giant holes in the ground. We’re like a carload of teenagers barreling toward a cliff, unable to turn aside because the driver wants to debate the existence of gravity.

Climate Change — A Hole Too Big To Ignore