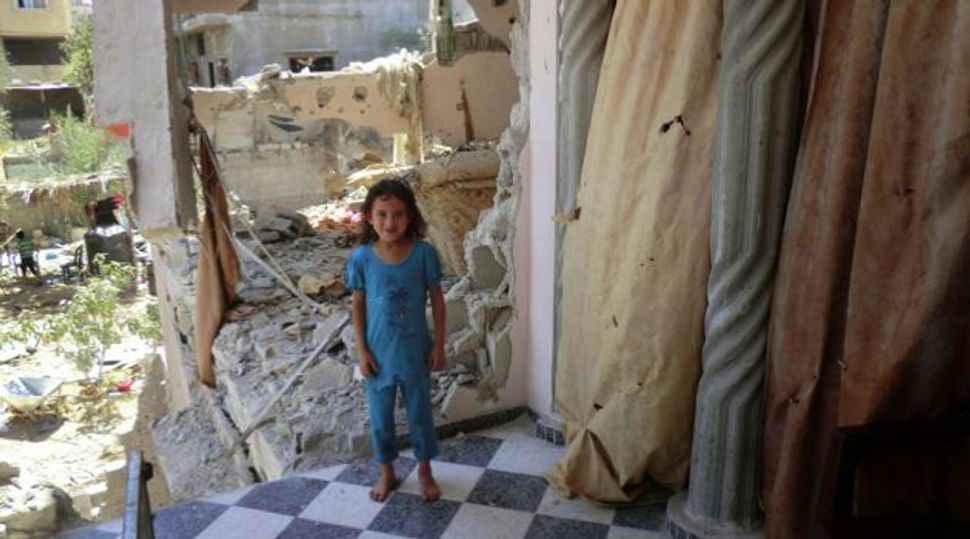 Falling Apart: Reem Abu Emer in her destroyed house in the village of Shejaiya. Image by Kathleen Peratis

I just returned from a visit to Gaza — my first since the war’s end — and found it ruined on a scale that I was not prepared for, despite all the pictures.

On the ground it can take you suddenly and squeeze the breath out of you. You drive through an area that is merely decrepit and derelict and crumbling, and then you come upon destruction that is of Hieronymus Bosch proportions.

Over the course of two days I spoke with many people who live in houses and apartment blocks near the Israeli border. Even before the war, Gazans called the first 300 meters beyond the border the “dead zone,” where no one except Israeli soldiers may go. In the next swath, farm animals could graze, and beyond that is where people live. As hostilities commenced, as a ground war seemed likely, the buffer zone got broader, and whole neighborhoods had to leave. I spoke to people who had lived in those neighborhoods.

I spent time in the village Shejaiya. It is a total ruin with no habitable house left. It is a vast expanse of gray rock and debris, rubble and ruin, welter and waste. Anything that is upright is barely so; everything is blown to bits on every side. There is a putrid smell in the air, and I was told that it is rotting animal carcasses not yet removed from the debris.

As I walked around Shejaiya taking pictures, a woman named Rusayla Abu Emer and her little daughter, Reem, approached me and pointed out their house — the orange one, she said — and asked if I wanted to come and see. I did. She took me on a proud tour of this uninhabitable house that she and 30 others nevertheless inhabited, showing me the wide gaping holes in the walls and ceilings from tank shells, gaping holes the many kids could easily fall through. The family has cleared a few rooms and swept the stairs, and tidied the kitchen so it is as neat as a pin (though unusable). It is hard to believe they are living in this pile of broken concrete and twisted metal, kids running around on floors with no walls, and a two-story drop if they slip. They rely upon the United Nations Relief and Works Agency for food and other necessities; Rusayla’s husband earns a few shekels most days, driving a taxi. She would not let me leave until I accepted a glass of juice.

Rusayla was not living in the house when this damage occurred. She stayed put for the first several days of the war when the bombs were distant, telling Reem to be patient, that it will be finished in a couple of days. After a week, Reem asked who was dropping the bombs. “Zionists,” Rusayla told her. “Why are they doing it?” Reem asked. “Because they think we have weapons, but we do not,” the mother explained.

With the first tank shells and rumors of a ground invasion, Rusayla and Reem and their neighbors fled. Having nowhere to go and no money to pay rent, they took shelter at one of the many United Nations run schools in Gaza thinking it would be a few days. But days turned into weeks, and tens of thousands of people had the same idea, so the U.N. schools became extremely crowded and even more uninhabitable — scary and filthy. After the final truce, Rusayla and her group of 30 decided that camping out in a ruined house was safer than at the U.N. school. As I picked my way around the neighborhood, I could see that other desperate people were making the same choice — trickling back, camping out among the ruins.

The damage in Shejaiya, repeated in many other parts of Gaza, looks like tornado damage in one sense — houses and neighborhood pulverized with little left standing. But it is unlike tornado damage in a very important respect: Help is not on the way. I asked Odeh Al-Zaghmouri of Palestinian Federation of Industries what he thinks will happen with reconstruction. “Nothing,” he said.

There will be no mobilization and there will be no relief unless Israel and Egypt agree to it. And Israel and Egypt will not agree unless Hamas is more or less out of the loop and the Palestinian Authority takes real control in Gaza — something the P.A. insists upon as well. Hamas is not about to be out of the loop or to turn over real control to the P.A. The people are suffering while the powers that be are bickering.

Even without this last war, Gaza was desperate. In fact, that is part of the reason for the “steadfastness” of the Gazans — they’ve become inured to suffering. As one person cynically told me, “You have been killing us slowly, so you might as well get it over with quickly.”

Kathleen Peratis is a lawyer in New York and a frequent traveler to Israel and the Palestinian territories.