In ‘Black-ish,’ Jews Are More Than White-ish 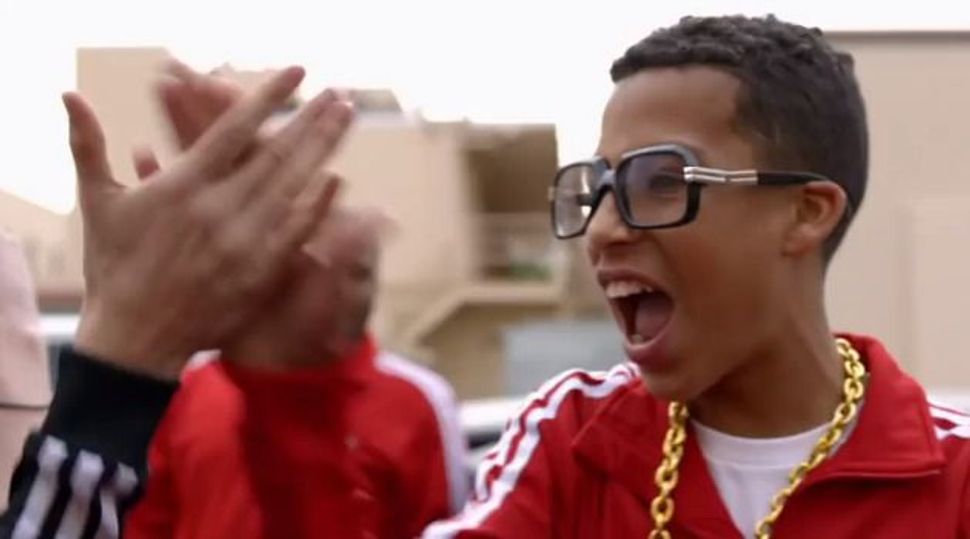 “Dad, I want to have a bar mitzvah! And — I’ll get a Hebrew name. I’m going to go with either Shlomo or Shmuel.”

So says young Andre Jr. — much to the dismay of Andre Sr. — in the trailer for ABC’s new family comedy, “Black-ish,” set to debut September 24.

This African American kid’s desire to have a bar mitzvah, even though he’s not at all Jewish, sets us up for his dad’s big concern: “Lately, I feel in order to make it, we’ve all dropped a little of our culture.” Worried about his family’s shifting racial and cultural identity, the father resists — “Jr., when you turn 13, I’m throwing you an African rites of passage ceremony” — at least at first.

The premise of the show is funny — but, for a Jewish viewer, it’s more than just that. In “Black-ish,” Jews represent the counterpoint to blackness. They are, in other words, the epitome of whiteness. They’re as white as white can be.

But Jews weren’t always perceived that way — far from it.

As Eric Goldstein writes in “The Price of Whiteness,” American Jews in the mid-19th century were read as non-white. Among the biggest pushers of this perception were American Jews themselves. Increasingly panicked over intermarriage and assimilation, they wanted to define Jewishness as a distinct race. In fact, the rabbi at Boston’s largest synagogue told his congregants in 1887 that “it remains a fact that we spring from a different branch of humanity, that different blood flows in our veins.”

But later — as (a) racial discrimination against blacks intensified, (b) an influx of Jewish immigrants from across Eastern Europe posed a visual challenge to the idea that all Jews form one race, and (c) anti-Semites tried to classify Jews as belonging to a non-white race — American Jews started to worry that they’d fall out on the “wrong” side of the black-white divide. Now, they very much wanted to be accepted into the white majority — and they worked hard to redefine themselves as such.

Still later, after Nazism made the idea of racial classifications repugnant, Jews started to express their particularity in terms of an “ethnic group” rather than a biological “race.” But in America, they continued to be viewed, by and large, as white — a status cemented by government assistance though the G.I. Bill, which opened educational and professional doors for Jews that were still closed to blacks. Karen Brodkin, author of “How Jews Became White Folks,” calls the G.I. Bill “the most massive affirmative action program in American history.”

Nowadays, it’s clear that the idea of Jews as white folks has not only caught on — it’s caught on so well that the characters in “Black-ish” think Jews are white folks par excellence. Sure, Andre Sr. never actually says that in so many words, but I’d argue this racial subtext is why he’s so freaked out by his son’s sudden interest in doing Jewish. He’s not just worried about cultural slippage; he’s worried about the whitewashing implied in laying claim to Jewish culture, in a context where that culture is racially marked as white.

Freakout notwithstanding, he eventually gives in to his kid’s request: “Welcome to Andre Jr.’s hip hop bro mitzvah” reads the banner outside the boy’s coming-of-age bash. It’s interesting that there’s no religious element to the bar mitzvah whatsoever — Judaism here is not a religion, it’s a culture, and a blingy one at that. The party is full of disco lights, black plastic glasses reminiscent of Hasidic Williamsburg, and the sort of DJs and dancers that were the staple of every 1990s bar mitzvah — you know, the ones who wouldn’t stop playing “Shout” and “YMCA”?

But hey, this isn’t just your typical bar mitzvah — it’s a “hip hop bro mitzvah” — so maybe the fusion of Jewish culture and black culture will give us an improvement on the usual schmaltzy soundtrack? Tune in on September 24 to find out.

In ‘Black-ish,’ Jews Are More Than White-ish