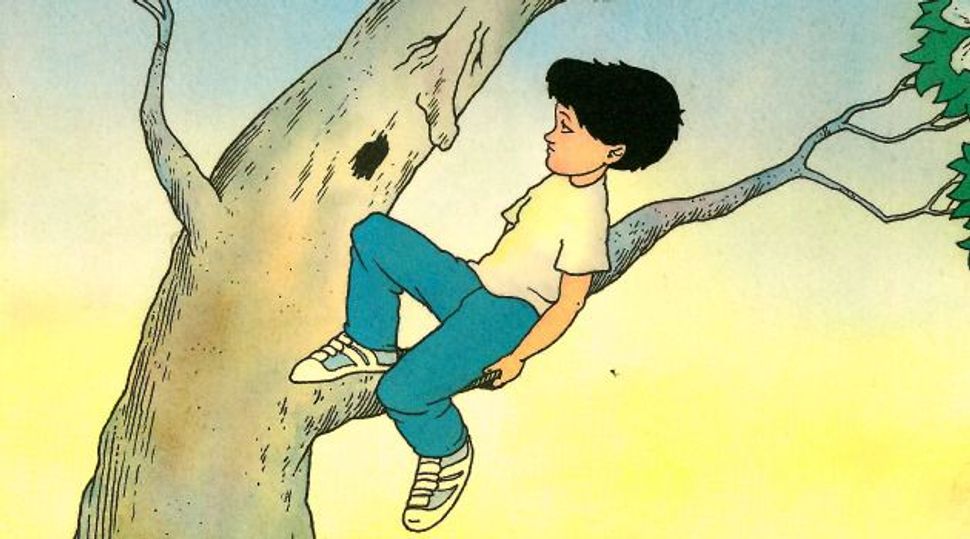 The obituaries lauded the way he employed artistry, intelligence and biting humor to his running commentary on the day’s news. They speak of his ceaseless devotion to craft, his fierce political independence, and the kindness he showed other members of that shrinking, noble cadre of journalists who draw what most of us can only gropingly think and feel.

I had the privilege of working with Tony for many years at The Philadelphia Inquirer. All the accolades accorded him are deserved.

But there’s something else. The obituaries briefly mention his work as an illustrator of children’s books. What they don’t mention are the two children’s books he published with Chaim Potok, and the extraordinary friendship that grew from this unlikely collaboration.

On the surface, the two men appear to have had little in common. Chaim was a Bronx-born observant Jew steeped in philosophy and faith, who catapulted to fame with “The Chosen” and continued to write novels, plays, biblical commentary and pursue teaching and scholarship. Tony was raised a Catholic, became a noisy agnostic, and held onto his southern California roots and irreverence even after decades in Philadelphia.

Chaim was, in many respects, an intellectual leader of the American Jewish community. Tony, on the other hand, was frequently criticized for the way Israel was lampooned in his nationally-syndicated cartoons.

Though they lived not far from each other on the Main Line, they didn’t really meet until 1990, when they were seated at the same table at a benefit dinner and conversed so happily and intensely that by the end of the evening they were already talking about working together.

Adena Potok, Chaim’s widow, told me yesterday that he had wanted to write stories for children but, even though he was an accomplished painter himself, knew he needed someone else to illustrate. He found that in Tony.

“The Tree of Here” was the first fruit of that effort. Published by Knopf in 1993, it is a gorgeously illustrated, quiet tale of a young boy forced to move to another state for his father’s new job. Chaim said at the time that he tried to convey the fear and powerlessness felt by young people having to uproot their lives, an all-too-common experience in mobile America.

It’s a different kind of children’s book: serious yet magical, where a boy’s loneliness is soothed by a tree that speaks to him. Reading it again as an adult, I sensed that while there is nothing specifically Jewish about the story, it somehow felt spiritual and redemptive in the telling.

Their second collaboration was “The Sky of Now,” published in 1995, which again tackles a young boy’s fears, this time of heights, allowing him to conquer a phobia with the help of the frightening but thrilling experience of riding in a glider, and the imagined friendship of dolls that talk.

There was discussion of a third book, but then life intervened, and illness commandeered the road. Chaim battled a brain tumor for several years before his death in 2002.

Adena recalled that their last contact was a few weeks before Chaim died, when Tony came to dinner in their rambling home in Merion. Tony used a special pen to draw a likeness of Chaim in one, brilliant line. Chaim admired the pen, and Tony gave it to him. The drawing was used on the back of the booklet distributed at Chaim’s shloshim memorial service a month after his death.

In truth, the two men looked remarkably similar, with round faces and broad foreheads framed by graying beards, most at home behind a desk surrounded by books and works of art. Even though Chaim was the cerebral novelist who worried about the world, and Tony the scathing editorialist who parodied it, they shared similar perspectives and enormous respect for one another.

Personally, I admire both men for another trait: They never stopped creating. Each could have easily rested on well-earned laurels, but they branched out, alone and together, to expand their craft on new stages and before new audiences.

Both sadly were felled by brain cancer at nearly the same age. Tony had a wonderful laugh that he used often. Chaim was more somber, but he, too, could laugh wholeheartedly. Somewhere, I hope they are continuing their conversation.