An Intrepid Immersion Into the Jewish Calendar 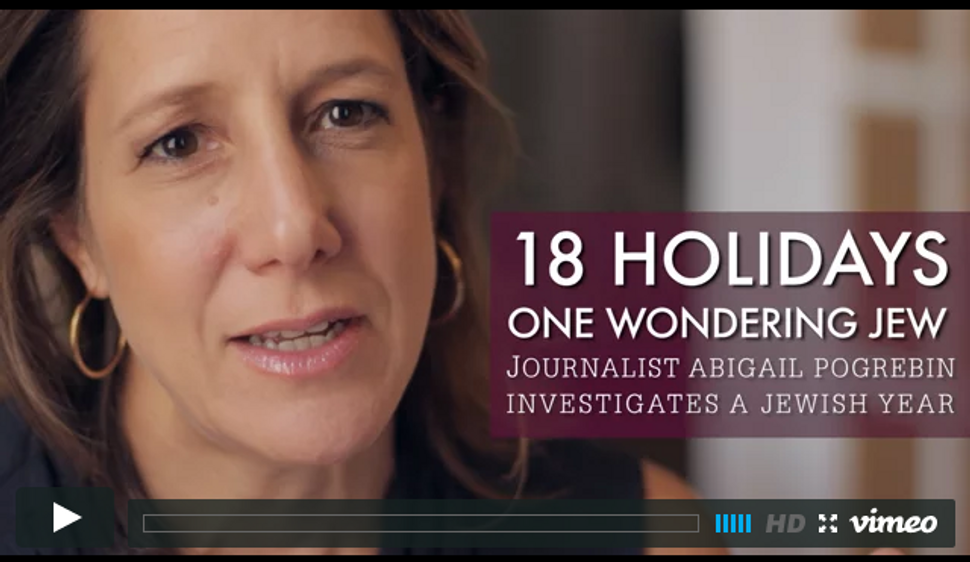 It’s a sure conversation-stopper when I tell friends, “This year I’ll be observing and trying to understand every single Jewish holiday.”

Non-observant Jews look puzzled: “Aren’t there, like, a thousand of those…? I guess you won’t be doing much else this year.”

Observant Jews shrug, as if to say, “Welcome to our world; want a trophy?”

But what the reactions share in common is the question, “Why now?”

Why, when my kids are teenagers and well past their b’nei mitzvah, when my husband of 20 years is perfectly content with our lukewarm level of observance, when it’s kind of late in the game to change the game, do I want to spend the next 12 months immersed in the Jewish calendar, interviewing different rabbis about each holiday, reading entire books about one single prayer, attending services I didn’t previously know existed, fasting five times instead of once?

The oversimplified answer is that the land of the holiday-knowers looks powerful to me from over here. It looks rich, challenging, possibly mind-expanding. It also, frankly, looks arduous, but I can’t believe it’s entirely toilsome, because something utterly taxing can’t endure the way the Jewish calendar has. Shemini Atzeret and the Fast of Tammuz must come alive if one understands them; I have to believe they must stimulate introspection or action, make us remember, connect, feel history, see the world differently.

Despite the fact that there are many thousands of Orthodox Jews who follow every holiday as a matter of course, most Jews in the United States are simply not living by the Jewish schedule, nor even aware of what happens when. I want to understand what we’re missing.

When last year’s much-dissected Pew Research Center study revealed that most Jews don’t find their connection in Judaism, it occurred to me: Maybe that’s because they haven’t looked there.

This Forward project aims to go hard to the holidays, the scaffolding of a rigorous Jewish life. Before I become one of the dismissers who claim to find more spirituality on the spinning bike than in a sukkah, I’m going to go sit in the sukkah.

Yes, I see the hurdles:

To be clear, I’m not starting from square one.

I was raised with High Holy Days, Hanukkah, two Seders and erratic Sabbaths, but Mom chose not to give me the same Jewish education she’d had, because she was rebelling against the patriarchal tradition at the time, and my Dad was a bagel Jew.

As an adult, I never found a spiritual home until eight years ago, when I attended a bat mitzvah at Central Synagogue, a Reform congregation in Midtown Manhattan. My family signed up the next day. It literally felt like the angels had delivered a tether when I hadn’t even realized I was adrift.

Since then, I’ve been a regular at Friday night services, all the High Holy Day services and even a Purim shpiel here and there. I’ve served on synagogue committees and its board, but that doesn’t count as observance.

When it comes to Jewish learning, however, I’m an addict. My study binge began when I was writing my first book, “Stars of David: Prominent Jews Talk About Being Jewish” (2005), for which I interviewed 62 famous Jews about their religious identity and whether Judaism mattered to them. (For Natalie Portman, it matters; for Nora Ephron, it wasn’t in her “top three things I’d say about myself.”)

As part of my pre-interview prep, I sought out a smart young rabbi, Jennifer Krause, to take me through a year of Torah because I thought I’d be caught knowing too little when talking with Jewish celebrities who knew a lot more. (Turns out I could have winged it.)

Those Torah sessions led to my decision to become a belated bat mitzvah at age 40.

Which led to my signing up for courses on Midrash at the Jewish Theological Seminary with Burt Visotzky, and seminars at the independent seminary, Mechon Hadar; attending Limmud NY for three straight days of learning; taking two years of Melton (Judaism 101) at Park Avenue Synagogue; listening to mp3 sermons by some of the most gifted sermonizers (see Rabbis Jonathan Sacks, David Wolpe, Sharon Brous, David Ingber and Ed Feinstein), resurrecting my sorry Hebrew; attending an Institute for Jewish Spirituality conference; reading Joseph Soloveitchik on faith, Abraham Joshua Heschel on prayer, Shai Held on Heschel, Judith Shulevitz on the Sabbath, Sacks on Passover, Alan Lew on the Days of Awe, Larry Hoffman on the Unetanetokef prayer, Yitz Greenberg and Michael Strassfeld on the holidays, Leon Wieseltier on Kaddish, you get the idea.

But I don’t talk about this addiction very much, which hopefully makes it less annoying.

But the truth is, this bottomless exploration of tradition and text has already changed me, challenged my approach to everything I care about: friendship, marriage, parenting, gratitude, charity, time. Something has shifted, and the process is clearly in its infancy.

It’s too late for me to apply to rabbinical school or to get two dishwashers.

But I want to ratchet up my practice, and I hope you’ll go with me.

I will be tracking the path and hopefully holding your interest, despite the number of dispatches. Just as Judaism asks us to stay the course, I’m asking you to stay with me, learn with me and maybe even teach me, too.

Ideally, this series will spawn a vibrant online conversation — not just about what each holiday means at its core, or how one connects to another, but whether a case can be made for greater observance by those of us who, for the most part, have opted out.

I will be interviewing some of the smartest guides I’m aware of to help me understand how one gets from rote to resonance, from ancient to urgent. Some of these conversations will be on video, most on the page. I will also be linking to the occasional musical piece, comedy video or holiday recipe.

Finally, I’ll be inviting you to submit your own ideas, innovations and holiday chronicles, in the hopes that all of us — wherever we land on the spectrum of commitment — can recharge engagement.

I’m approaching this as both a journalist and a Jew.

For those of you who already “get” the magic, I may have lost you already.

For those of you who have so far only dipped a toe into the Jewish year, I hope you’ll take the dive with me.

See you around Rosh Hashanah.

An Intrepid Immersion Into the Jewish Calendar