On Rosh Hashanah, a Breath of Life 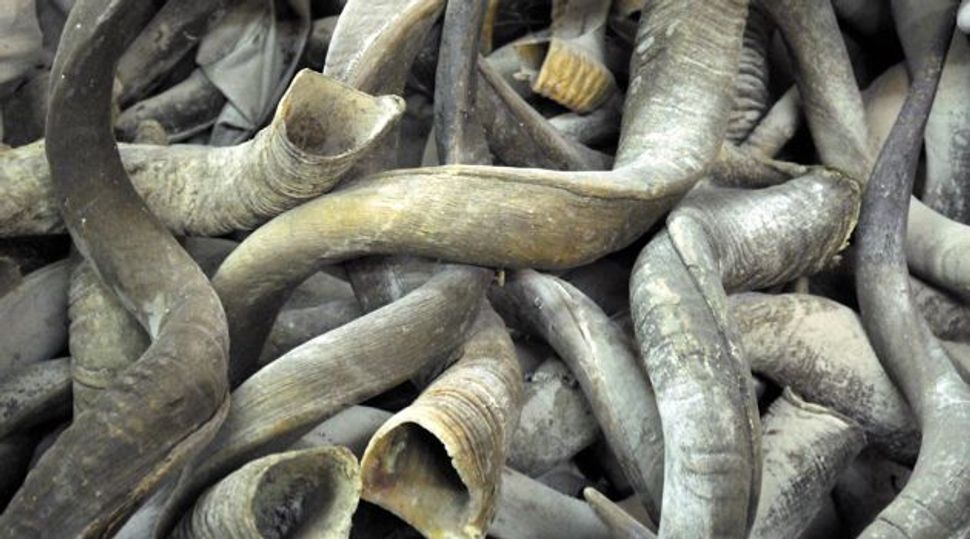 Against Death: On Rosh Hashanah we blow the shofar, the one mitzvah we fulfill by the breath of life itself without needing any words. Image by Getty Images

In the year that we are now parting with, 5774, it became dangerous once again to be a Jew. Israel, subject to sustained missile attack, discovered how hard it is to fight an asymmetric war against a terrorist group ruthless enough to place rocket launchers beside schools, hospitals and mosques. It found itself condemned by large sections of the world for performing the first duty of any state, namely to protect its citizens from danger and death.

Anti-Semitism returned to the streets of Europe. One hundred and twenty years after the Dreyfus trial, the cry “Death to the Jews” was heard again in Paris. Seventy years after the Holocaust, the call of “Jews to the gas” was heard on the streets of Germany. There were times when it felt as if the ghost of a past we thought long dead had risen to haunt us. More times than was comfortable, I heard Jews say, “For the first time in my life I feel afraid.”

Let us stay with those fears and confront them directly. We are not back in the 1930s. To the contrary, for the first time in the almost 4,000 years of Jewish history, we have, simultaneously, independence and sovereignty in the Land and State of Israel, and freedom and equality in the Diaspora. Israel is strong, extraordinarily so. The success of the Iron Dome missile defense was the latest in an astonishing line of technological advances — not just military, but also agricultural, medical and commercial — designed to protect, save and enhance life.

Israel has lived with the disdain of the world for a very long time. Even the most lukewarm among us knows that it is infinitely preferable to have a State of Israel and the condemnation of the world than to have no Israel, no Jewish home and the sympathy of the world.

The unity Israel showed during the Gaza conflict was deeply moving. It reminded us that in a profound existential sense we remain one people. Whether or not we share a covenant of faith, we share a covenant of fate. That is a good state to be in as we face the Yamim Noraim, the Days of Awe, when we stand before God not just as individuals but also as a people.

As for anti-Semitism, rarely has it been more self-evident that the hate that starts with Jews never ends with Jews. The most significant enemies of the Jews today are the enemies of freedom everywhere. Worldwide we may feel uncomfortable, anxious, but there are parts of the world where Christians are being butchered, beheaded, driven from their homes and living in terror.

As for Muslims, one prominent academic recently estimated that of the hundreds dying daily, at least 90% were doing so at the hands of their fellow Muslims. Bahai are at risk. So are the Yazidis. So, in other parts of the world, are Buddhists, Hindus, Sikhs and, for that matter, atheists. No historian looking back on our time will be tempted to call it the age of tolerance.

Which brings us back to the Yamim Noraim. There is a note of universality to the prayers on Rosh Hashanah and Yom Kippur that we do not find on other festivals. On other festivals, the key section of the Amidah prayer begins “Atah bechartanu mikol ha-amim,” “You chose us from among all the nations.” The emphasis is on Jewish singularity. On the Yamim Noraim the parallel prayer begins, “And so place the fear of the Lord our God, over all that You have made… so that all of creation will worship You.” The emphasis is on human solidarity. And human solidarity is what the world needs right now.

One message resonates through these days: life. “Remember us for life, King who delights in life, and write us in the book of life for your sake, God of life.” We sometimes forget how radical this was when Judaism first entered the world. Egypt of the Pharaohs was obsessed with death. Life is full of suffering and pain. Death is where we join the gods. The great pyramids and temples were homages to death.

Anthropologists and social psychologists still argue today that the reason religion exists is because of people’s fear of death. Which makes it all the more remarkable that — despite our total and profound belief in olam haba and techiyat ha-metim, life after death and the resurrection of the dead — there is almost nothing of this in most of the books of the Bible. It is an astonishing phenomenon. All of Kohelet’s cynicism and Job’s railing against injustice could have been answered in one sentence: “There is life after death.” Yet neither book explicitly says so.

To the contrary, King David said in a psalm that we say daily: “What gain would there be if I died and went down to the grave? Can dust thank you? Can it declare your truth?”

Almost at the end of his life, Moses turned to the next generation and said to them: “Choose life, so that you and your children may live.” We take this for granted, forgetting how relatively rare in the history of religion this is.

Why so? Why, if we believe the soul is immortal, that there is life after death and that this world is not all there is, do we not say so more often and more loudly? Because since civilization began, heaven has too often been used as an excuse for injustice and violence down here on earth. What evil can you not commit if you believe you will be rewarded for it in the world to come? That is the logic of the terrorist and the suicide bomber. It is the logic of those who burned “heretics” at the stake in order, so they said, to save their immortal souls.

Against this horrific mindset the whole of Judaism is a protest. Justice and compassion have to be fought for in this life, not the next. Judaism is not directed to fear of death; it is directed to a far more dangerous fear: fear of life with all its pain and disappointment and unpredictability. It is fear of life, not fear of death, that has led people to create totalitarian states and fundamentalist religions. Fear of life is ultimately fear of freedom. That is why fear of life takes the form of an assault against freedom.

Against that fear we say from the beginning of Elul to Sukkot that monumental psalm of David: “The Lord is my light and my salvation. Whom then shall I fear? The Lord is the stronghold of my life. Of whom then shall I be afraid?” On Rosh Hashanah we blow the shofar, the one mitzvah we fulfill by the breath of life itself without needing any words. On the first day of Rosh Hashanah, the “anniversary of creation,” we read in the Torah and Haftorah not about the birth of the universe but about the birth of Isaac to Sarah and of Samuel to Hannah as if to say one life is like a universe. One child is enough to show how vulnerable life is — a miracle to be protected and cherished. On Yom Kippur we wear the kitl, a shroud, as if to show that we are not afraid of death.

Never before have I felt so strongly that the world needs us to live this message, the message of the Torah that life is holy, that death defiles and that terror in the name of God is a desecration of the name of God.

The State of Israel is the collective affirmation of the Jewish people, a mere three years after emerging from the valley of the shadow of death, that “Lo amut ki echyeh,” “I will not die but live.” Israel chose life. Its enemies chose the way of death. They even boasted, as did Osama bin Laden, that the love of death made them strong. It did not make them strong; it made them violent. Aggression is not strength; it is a profound self-consciousness of weakness. And the main victims of Islamist violence today are Muslims. Hate destroys the hater.

Today it is not just Israel or Jews whose freedom is at risk, it is the whole of the Middle East, large parts of Africa and Asia, and much of Europe. Therefore let us approach the New Year with a real sense of human solidarity. Let us show, by the way we celebrate our faith, that God is to be found in life. The love of God is love of life. Let us take to heart King David’s insistence that faith is stronger than fear. No empire ever defeated the Jewish people, and no force ever will. May God write us, our families, the people and State of Israel and Jews throughout the world, in the book of life. And may the day come when the righteous of all nations work together for the sake of freedom, peace and life.

Jonathan Sacks is currently the Ingeborg and Ira Rennert Global Distinguished Professor of Judaic Thought at New York University and the Kressel and Ephrat Family University Professor of Jewish Thought at Yeshiva University. He served as Chief Rabbi of the United Hebrew Congregations of the Commonwealth from 1991 to 2013.

On Rosh Hashanah, a Breath of Life