Breadcrumbs and Gedaliah: My Post-Rosh Report 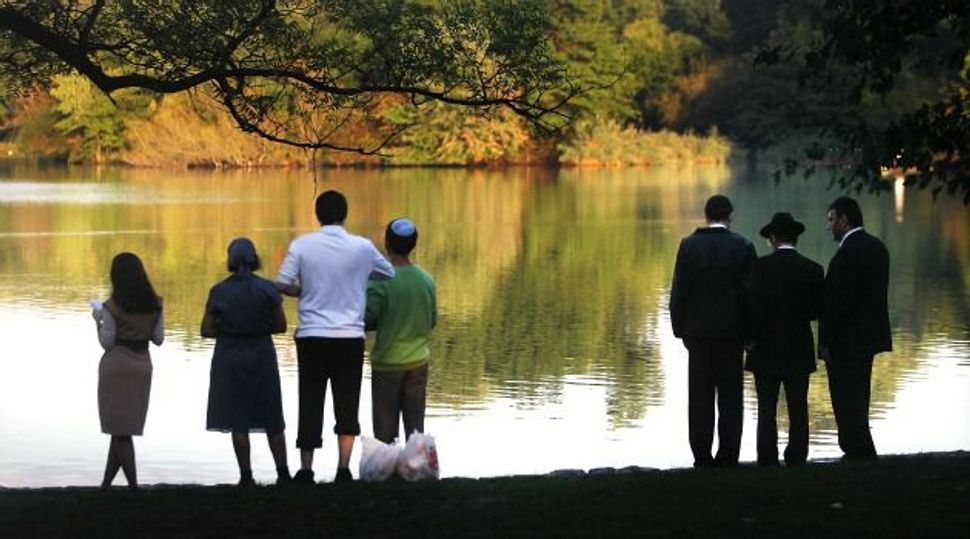 Not By Bread Alone: Jews pray while marking Rosh Hashanah during a traditional Tashlich ceremony in New York City. Image by Getty Images

I remember, as a kid, feeling that the Unetanetokef prayer (“Who will live and who will die”) didn’t apply to me.

“Who by sword” seemed archaic; “Who by water” remote.

But that prayer becomes alarmingly vivid as we get older. This year it felt as if every peril leapt off the page.

“Who shall see ripe age and who shall not…” My childhood friend, Dan, died a few weeks ago while swimming in the ocean.

“Who shall perish by fire…” Six members of a New Jersey family – related to Rhonda, who works the counter where I get breakfast– died in a fire on Father’s Day.

“….and who by water.” The New York Times reported five days ago that, left unchecked, global temperatures will ultimately flood coastal cities.

“…and who by beast….” Just three days before, a 22-year-old hiker was mauled by a bear.

“Who by earthquake…” Napa last month.

The litany rattles me last week, as I stand with my congregation, Central Synagogue, in Avery Fisher Hall – the massive concert space at Lincoln Center where we hold High Holy Day services to accommodate our numbers.

But I’m also hyper-aware of how comforting it is to look out from my vantage point – from the first tier balcony –upon rows and rows of yarmulkes and familiar faces.

Two self-evident facts are suddenly, atypically moving: 1. We made it here another year. 2. Look how many of us feel it’s important enough to come.

Whatever the Pew Center Report portends about synagogue attrition, there are still glowing pockets of connectivity and attention.

For my shul, there’s also an extra tenor of expectation and scrutiny on this Erev Rosh Hashanah because just one week earlier, Rabbi Angela Buchdahl, formerly Central’s senior cantor, was installed as the new senior rabbi, (the first woman to hold the job in Central’s 140-year history and the first Asian-American to lead a major pulpit), taking the baton from the much-beloved Rabbi Peter J. Rubinstein, who led the congregation for 23 years.

From her first words, Buchdahl manages to shrink the grand auditorium to an intimate sanctuary, and when she sermonizes about the Fifth Commandment (honor your mother and father,) I realize I haven’t had a meal alone with my parents in months and have been rushed on our phone calls. I add that to my list of “al chets.”

When Buchdahl pauses in the liturgy to acknowledge a painful summer and introduce the Hebrew prayer for Israel, “Avinu Shebashamayim,” I realize it’s the first time since the three teenagers disappeared in June that I’ve stood alongside hundreds of fellow Jews, acknowledging – without speaking – the upheaval and disquiet we’ve all been feeling.

The following afternoon, the rain starts just as my teenage daughter, Molly, and I begin to toss pieces of challah into the East River.

JTS professor Rabbi Burt Visotzky hates Tashlich: “Throwing crumbs out of your pocket doesn’t absolve you of your sins,” he scoffs. “It’s not the real work.”

But I have always found the practice makes me cry. Maybe because it’s a physicalized expiation instead of just atoning in our heads. Maybe because Tashlich has always made confession tangible for my children, and since they were little, I’ve taken them to the water to watch their faults float away. 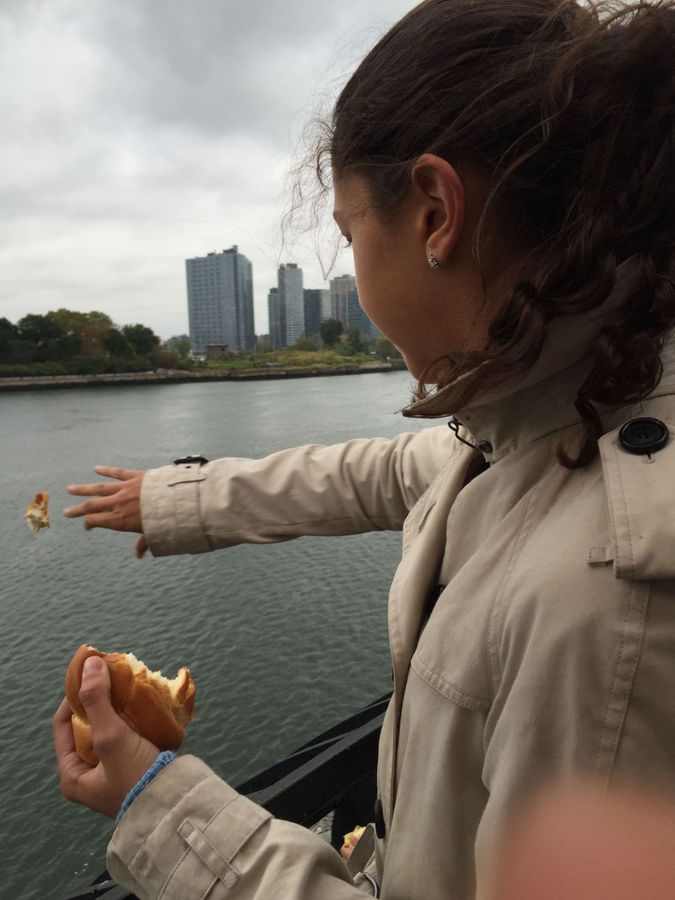 Friday morning, the second day of Rosh Hashanah, I visit Romemu, a congregation which draws upon traditional and Eastern spiritual practices, and which visibly strives to make every prayer not just understandable but emotional.

Rabbi David Ingber, who maintains a kind of simmering concentration, co-leads the service with Rabbi Jessica Kate Meyer, who has an ethereal presence. People clap or sway in the pews around me, even, at times, lifting their arms in the air. Before each aliyah in the Torah service, Ingber introduces an idea (or challenge) and invites those for whom it resonates to come up to the bimah for the blessing.

Romemu uses a machzor (prayer book) that is more captivating than any I’ve seen before. Compiled by Joseph Rosenstein, a mathematician who teaches at Rutgers, it features a running explanation of why each prayer is there and how it connects to Torah or the liturgy as a whole. I feel suddenly certain that if every bored Jew held this book, they would never be bored again.

When I get home, I order a copy from Rosenstein’s website, newsiddur.org, and a day later, he sends a personal thank-you, attaching a review by Rabbi Harold Kushner – author of the best-selling book, “When Bad Things Happen to Good People.” Kushner’s praise for Rosenstein’s elucidations don’t just confirm my own; it makes me feel even more strongly that this book could save synagogues.

“Rosenstein has succeeded in prying open the familiar prayers…exposing the kernel of relevance at its core,” Kushner writes. “Suddenly the text is transformed from ‘this is what you’re supposed to recite to be a good Jew’ to ‘this is something I need to think about but haven’t done so until now’ or ‘this is something my soul wanted to say but couldn’t find the words for.’”

For years, I’ve articulated—maybe too passionately—a conviction that uninspired Jews-in-pews would wake up if clergy could instruct during worship without interrupting it. When we’re informed, we’re moved; when we’re moved, we come back. I know there’s little chance that synagogues will switch over to Rosenstein’s prayerbook, but it’s heartening to know it exists.

Later that afternoon, I feel awkward and old among a group of 30 mostly-younger strangers who have signed up for “Let it Go: A Tashlich Walk” co-conceived by The Lab/Shul (a self-described “Experimental Jewish Community” based in Tribeca,) and Elastic City, which organizes “participatory walks” through New York City.

I’ve left my comfort zone because I’m curious about innovations, especially those from Lab/Shul founder Amichai Lau-Lavie, an Israeli who, via fast word-of-mouth (and a little help from a glowing New York Times profile last March,) has become, (along with David Ingber,) one of the poster boys for reimagined ritual in New York.

Lau-Lavie’s humor and brio suggest a refreshing impatience with business-as-usual. On Friday afternoon, he urges our group to make Tashlich urgent: “What are you holding onto?” he asks the group. “I invite you to find someone and confide what you are shedding today: skin, memories, iPhone apps.”

We’re shepherded on a route through Hell’s Kitchen mapped out by Lau-Lavie and fellow “ritualist” Shawn Shafner. We make a stop to “shed” clothing donations at Housing Works, (a thrift shop that supports AIDS patients,) then pause in front of restaurants with names like “Gossip” and “Perdition” – apt stimuli for atonement.

When we stand under the 46th street footbridge that leads to the river, I identify with what people admit they’re shedding: “Indecision.” “Intolerance.” “Guilt.” I’m tempted to say, “I’m shedding my initial resistance to this event.”

Sunday (yesterday), The Fast of Gedaliah feels like the ultimate test of holiday stamina.

Tzom Gedaliah (no food from dawn to dusk) happens the day after Rosh Hashanah ends (except on years like this one, when it’s delayed a day because we can’t fast on Shabbat.)

My husband and kids abandon me in my starvation, but my friend from synagogue, Jeremy, has offered to be my “Fast-Chum” this year. (I came up with that title since he’s British.)

Tzom Gedaliah marks the assassination of one Jew by another, soon after the destruction of the First Temple in 586 BCE. Gedaliah, a kindhearted Jew, was chosen by the conquering Babylonian king to govern the Jews who stayed behind in Judah after most of the population fled. He was seen as a collaborator and murdered.

When I ran into the eminent sociologist Steven M. Cohen ten days ago, he razzed me that any true holiday-observer had better be fasting on Gedaliah and offered an interesting tidbit: some peace activists have suggested that Tzom Gedaliah be updated to honor Yitzhak Rabin, the late Israeli prime minister who was also assassinated by his own people.

Cohen also said some observant Jews shorten the hunger by waking up in the dark to eat breakfast so they can start the fast at sunrise on a full stomach. At this writing, as my headache explodes from caffeine withdrawal, I wish I’d taken a page from the cheaters.

But I have to admit that whether or not Gedaliah’s murder speaks to me, (and it doesn’t,) today I remembered I was a Jew. And I was reminded over and over again, thanks to the hunger pangs, that Jews doggedly replay history, however remote that history may be. There’s something indelible in that alone.

Breadcrumbs and Gedaliah: My Post-Rosh Report